New group page (h/t to Arrested Development for spangly logo). So new I haven't even taken the cellophane off but why not click the banner/link and sign up with a team so you can receive any updates and news of award ceremonies direct to your inbox.

The lineage of the belts is now available in akaRenton's awesome bookcase project. 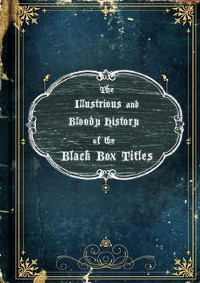 This is where I'll be archiving results as the seasons roll on. Thanks to aka for letting me be a part of it and designing the book cover.

The month started with bghandras being awarded the inaugural title reign. Let's see how he's getting on defending it after a word from one of our sponsors...

CIBBL (CabalVision Inter-regional Blood Bowl League) is a seasonal fluff-heavy league, with regional play, cups and inter-regional ranked play, making use of CRP + SL teams and CRP+ rules. The league is constantly recruiting so if you are interested in fluff heavy blood bowl, contact Calthor.

Welcome back. Before the break we were waiting to see how bghandras had got on defending the title so far and, I think, our goblins behind the scenes finally have the data ready. Can you put it up on the titantron?

wow, that's an impressive run bghandras is laying down as the inaugural champion. 5 wins and 2 draws (as we all know the title can only change hands on a victory, either pinfall or submission).

6 defences are with Undead: 3 with Treasure, a 4 games played team; 2 with Relentless, a slightly older team with 13 games on the board; and 1 defence with After-life, older still at 19 games played.

The non-Undead defence was with Hammer of Ice an undefeated Norse team, with 9 games played.

Full hisory of the title is here.

As always, if you think you've got what it takes to beat bghandras then he'll see you in the box and you can get your shot at fame.

This season is running from start of October until the end of November. Perfect time for jdmick's picks:

kfoged's Hell Grannies were champions last season and are in solid contention this season (21pts, 3/3/3) but close behind is ramchop's Punching Hags (20pts, 3/1/6). Outside contender Harad with the Women's Institute (14pts, 2/2/2) still stand a chance but need to get those games on the board.

With several comnpleted sprints played, it's going to take something special to know Ignaz's Klappe die zweite off the top spot (50pts, 10/4/2). CroixFer's Red Hunters may be that something special as they are off to a promising start (24pts, 6/0/0). jean-michel's Rash, last season's champions, are in second place at the moment (45pts, 8/5/3).

No completed sprints yet, and no teams in double digit games, so the field is wide open and crowded at the top. Dwarf and cow, coached by Suppurax (5/1/0) and pyhtrr's Lammer Heretics (4/1/4) are joint top on 22pts. Throweck is catching fast with Straight Outta' Compton (18pts, 4/0/2). Last season's champs, big_tschad's Plain of Zharr, are nowhere to be seen. Mine collapse?

Elf #1 Contenders, sponsored by the ARR and ELF metagroups

Only one team in the running at the moment, as last season's champs Rain Wild, coached by Timetis, have twice the number of games played (40pts, 8/2/4). mrt1212's Terrible Trade-elves BBL are pick of the rest (12pts, 3/0/0), but with only 3 games played it's a mighty big catch up.

History looks to repeat itself as I Gigietti, coached by dirold are top (24pts, 2/5/6). Uedder's FancySetter could still spoil the goblin party though (19pts, 2/5/1)

Well, this is embarrassing. Current top blackbox Halfling team is Zed's Left My Heart In San Francisco (4pts, 1/0/0). How did they get here? Who left the window open when you were baking those pies? Casualties R Us, coached by tussock, are making good use of the points they get for turning up (2pts, 0/0/2).

High Elf #1 Contenders, sponsored by the ARR and ELF metagroups

azyx's vapourlecomplot have the full sprint done and are looking strong (43pts, 9/0/7) but MattDakka's Asuryan's Phoenices (17pts, 3/2/1) and ImpactedAnimal's Charioteers of Tiranoc BBC (10pts, 2/0/2) still have plenty of games in hand and are serious threats for the title.

Dispelling rumours of their demise in the box, bujke has taken the Sand Creepers to a strong lead (45pts, 8/5/3). Kurjo could tie that if Mumierologia win their next 7 games (17pts, 2/2/5), other than that a new challenger is needed. Current champs, Boardy sokoletons coached by Silviackk, are looking dusty (1pt, 0/0/1).

bourbane's Les_C_Mignons are the only team with a completed sprint (43pts, 8/3/5) and are the strongest pick for the title this season. Jos75's Hessen Clowns (last season's champs) are well off the pace at the moment (7pts, 1/1/1).

All has changed in the necromantic rankings as none of the top 3 teams last season are in the top 15 placings at the moment. ImpactedAnimal's Curse of the Holy Grail Rabbit are the only completed sprint and are top with an impressive 52pts (11/3/2). ArrestedDevelopment doesn't quite have enough to steal top spot yet with Varúlfur (29pts, 4/5/2) but the race is on between him and ImpactedAnimal's other team, the Moon Raisers (24pts, 4/3/2) for second place. One to watch is Nicodaz, the coach of Marvin Tribute, who are looking very strong (21pts, 5/0/1), even if they have a ma3 frenzy golem with a stupid name :P

In a division infamous for nurgle teams, it is shocking that no team has even completed half a sprint. Rot Pot, coached by Noble (20pts, 5/0/0) are top, but the division is wide open.

Sableheart's Stonehorn Butchers are blitzing through the games (19pts, 1/4/7) but have a beatable total on the board. Conventional Brutality, coached by tussock are second but are somewhat off the pace (4pts, 0/1/2). My Sabre Mountain Shakers are third (4pts, 1/0/0) but are busy cracking skulls in the Fumbbl Cup at the moment so aren't able to put in the games.

Steakhachez,s Fistful of Steel were early contenders for top orc team this season (37pts, 5,6,5), and they're still the only completed sprint, but they've been overtaken by Stonetroll and the Special Orc Services (41pts, 8/3/3). Not too many other teams in contention at the moment due to only a handful of games played each

Again, lots of games played and lots of teams in contention but nobody is close to a full sprint yet. Hollaender's Care Bears for the Fluff (15pts, 2/2/3) and doclystria's Fragilissimae Lightweights (10pts, 2/1/0) are heading up a tight pack. Too close to call.

Castleman's Hero Association (26pts, 5/2/2) have a slight lead over shogun_france's Gerboniture (24pts, 5/0/4). Remaining teams are someway behind so a two horse race at the moment.

cdassak is triumphing here as his muties go UndARR the RadAAR to notch up an impressive 48pts (9/5/2). Keggie's Florescent Jumpsuits are the only other team in double figures (22pts, 3/3/4).

And finally...
Wood Elf #1 Contenders, sponsored by the ELF metagroup

Mzmzmzmzmzmzmz, coached by bancobat (22pts, 4/2/2) and Woodies of Mass Distraction, coached by Superlynx (15pts, 2/3/1) are the closest rivals to Prinz11. But there are lots of hungry wood elf teams who have only just started their seasons and look poised for glory.

Well, thanks very much for reading if you made it this far. Remember that the racial belts are decided using "real sprint" data, meaning either you or your opponents need to be >1400k tv for the result to count.

Full history link pointed to a notes page that was set to private - changed that.

Need to buff my teams to the magic 1500 mark to start counting :)
Posted by ImpactedAnimal on 2016-11-04 20:51:34
Thanks for this post JD - by the way - I don't suppose you ever played in a Cyanide league called orca cola with pro elves and then with goblins? You have a similar name to a player I once played a couple of times with my skaven (as Glokta) so wondering if you're the same person hehe.

Arquebus just buy rerolls at twice the starting rate and get a load of assistant coaches and you will be there in no time ;)

Not like necessarily winning games but... you'll be there.

Better than being told unlucky by ranked pickers after they thrash your fling team with a tpomb elf freak hehe "aww yeah mate, I just got really lucky with the cas this game" ;) (credit to EasilyAmused on that one as he cracked me up with it earlier I felt it reasonable to steal it mwahahah)

Anyway I need to get a load more games played with some of my other teams now - see you on the pitch!