83 coaches online • Server time: 00:08
* * * Did you know? The player with the strongest arm is Cherrystone Hotpack with 5758 yards passed.
Log in
spubbbba
Last seen 5 hours ago

The blocker ogre ended up taking the most time of all the models so far. He easily had the most armour and painting this proved to be very time consuming. More armour also meant more red borders or decoration and that added to the painting time too.

I still wanted areas of bright white detail to contrast with the yellow and painted his leg wrappings white, leaving the straps brown. He got a very light grey beard too as the front of the model was lacking white.

His skin started off brown and I added cadian flesh to this, which made him look tanned rather than darker. 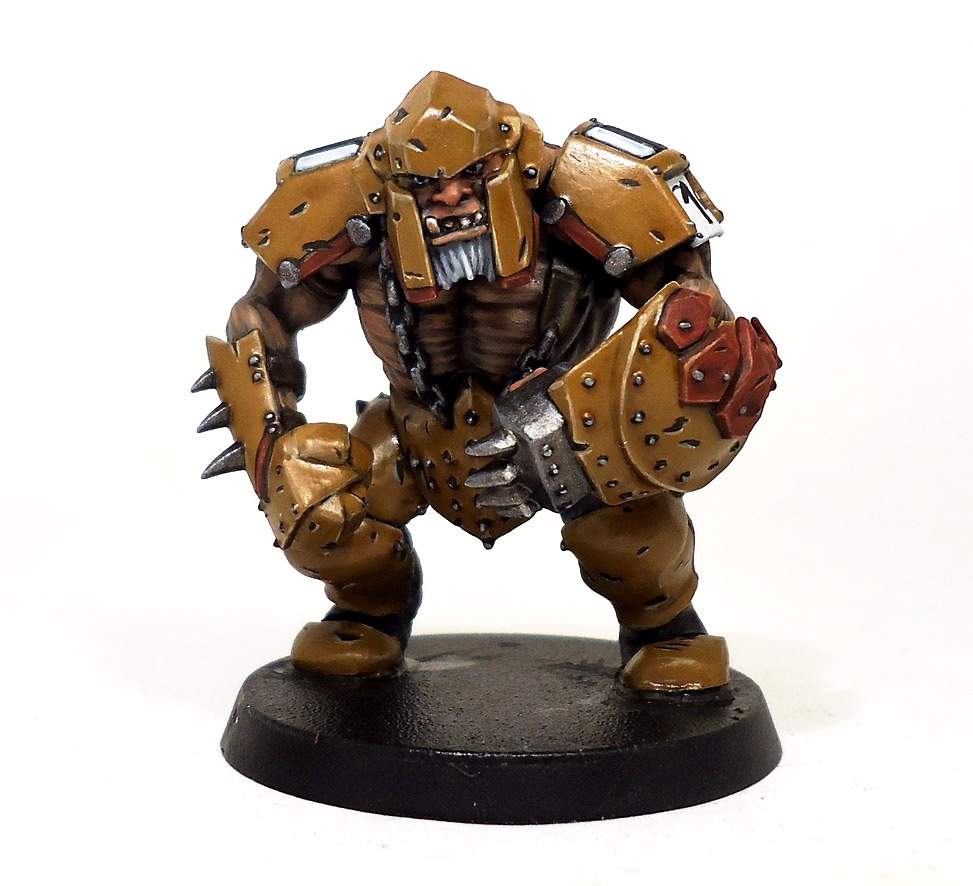 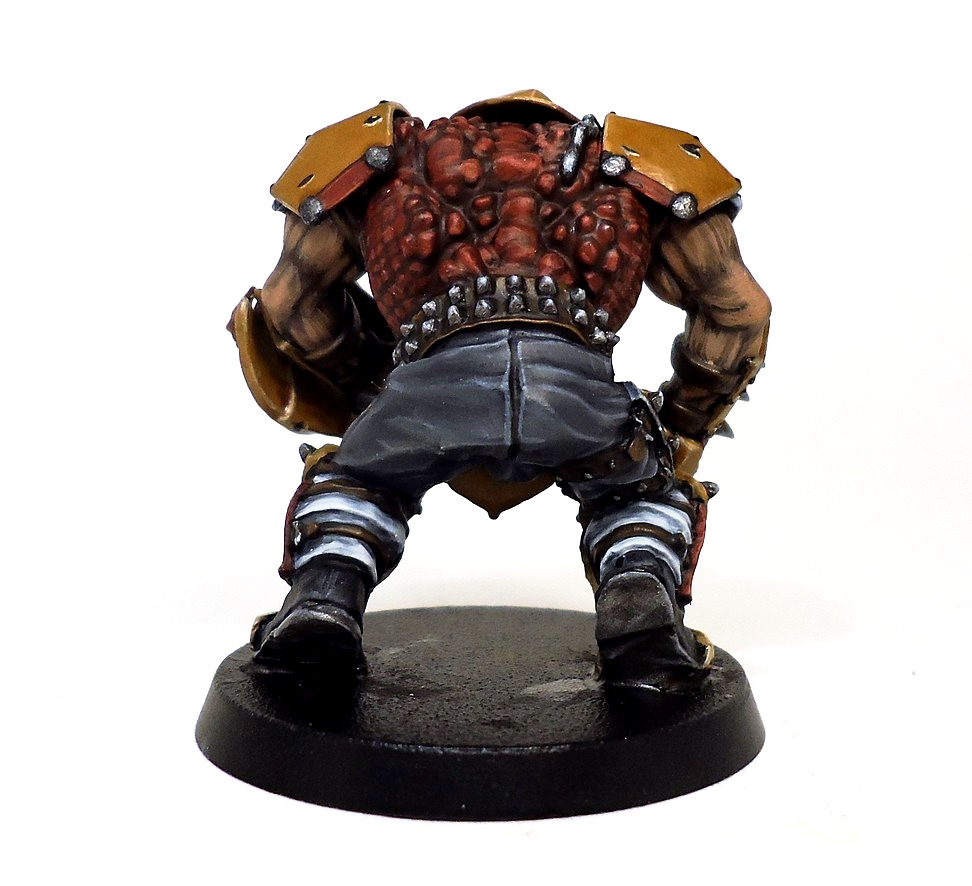 For the catcher I gave him the palest skin as he has the most agile and yet fragile role of the team. For this I used my usual technique for skin, starting with light brown and then adding dwarf and then cadian flesh. There was less of a contrast between the muscles compared to other players, but it turned out really well, especially on his chest.

To keep the areas of white he got a white Mohawk and the inner parts of his wrist guards. 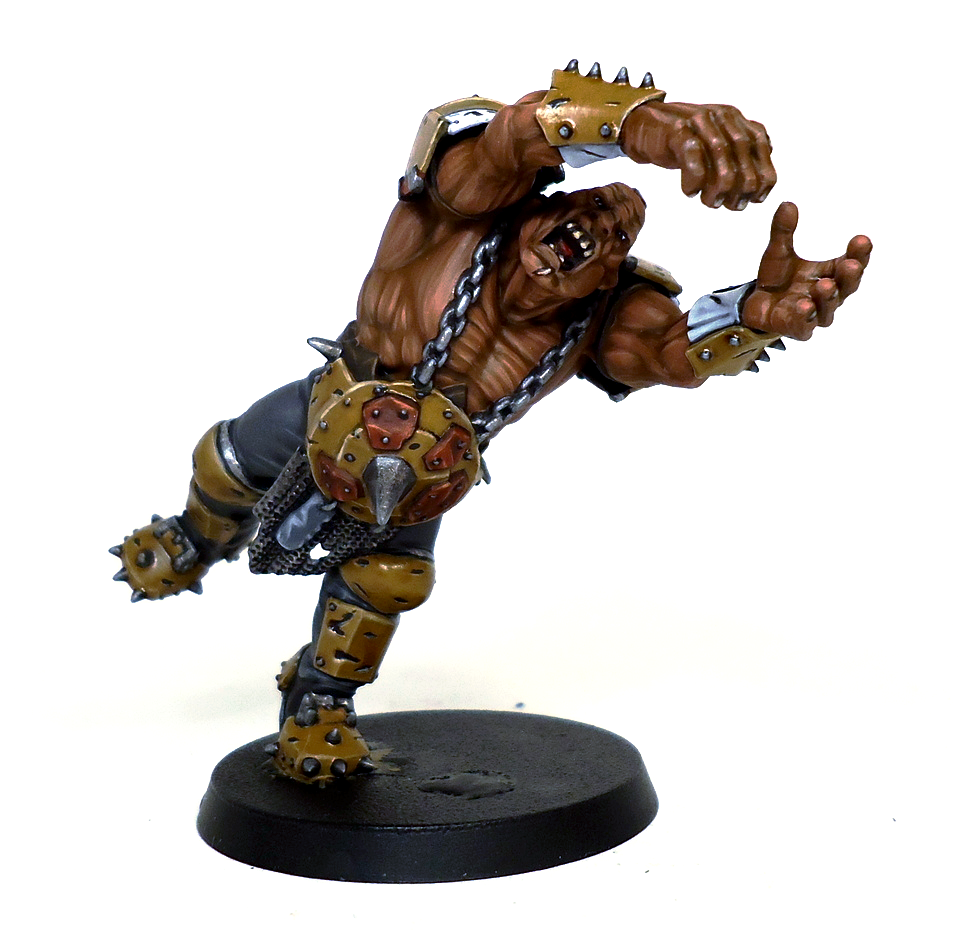 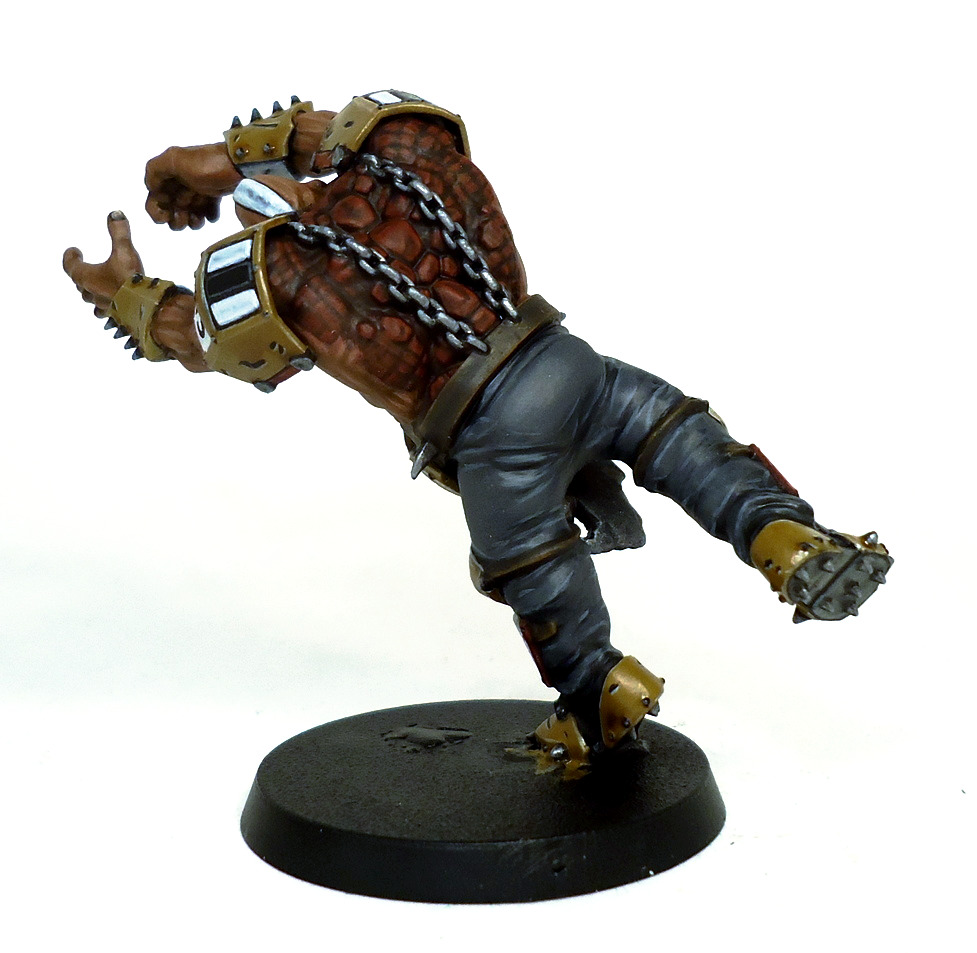 The Black Scorpion snotlings all looked pretty similar and were painted in the same way as the ogres. They don’t have much armour and are mostly flesh with a few items of clothing.

I deliberately made them a bit duller, avoiding the red decoration on them as they are just meant to be worthless fodder. The team will have 13 snotlings in total as I don’t think many ogre teams drop below 3 ogres. There will also be Grotty as an emergency snot if needed. 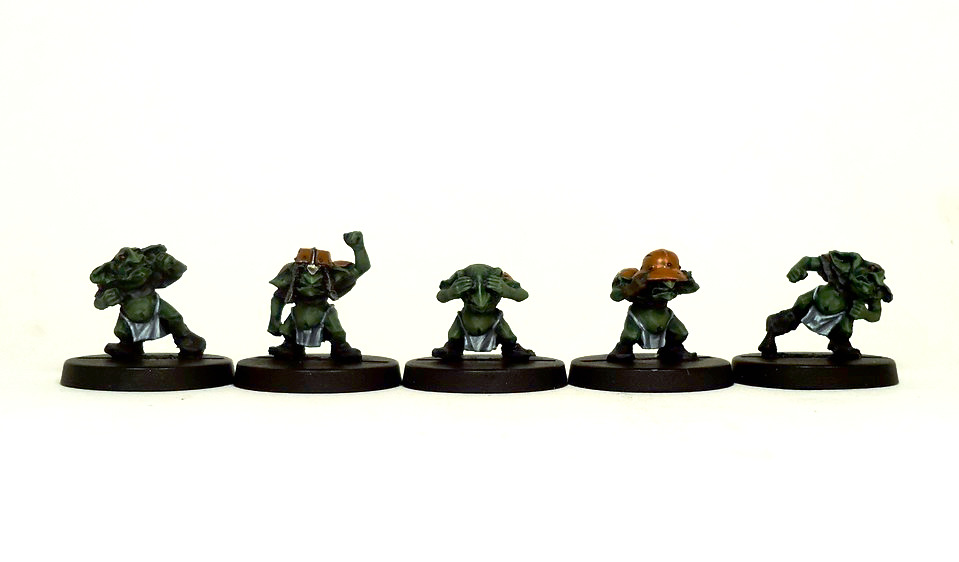 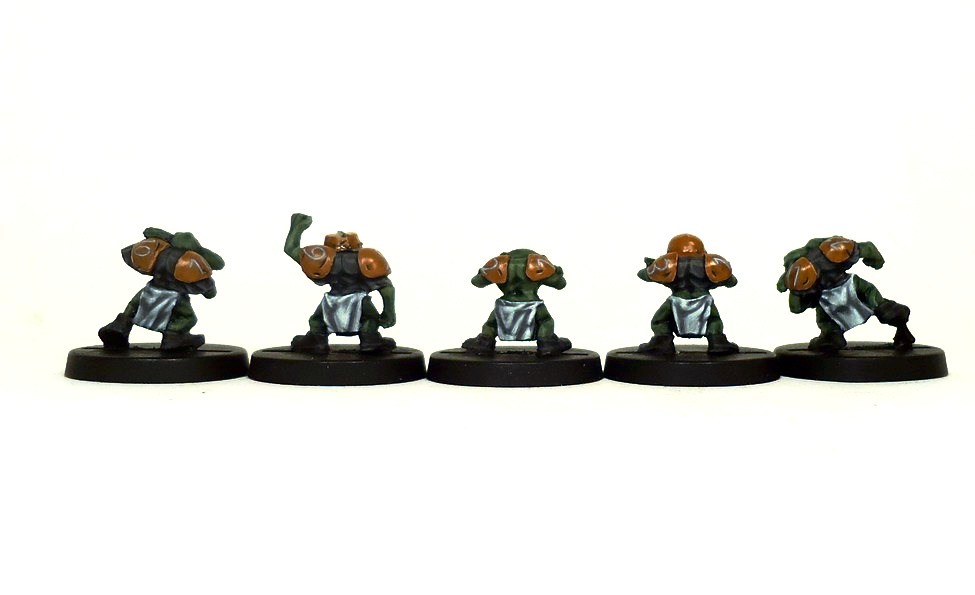 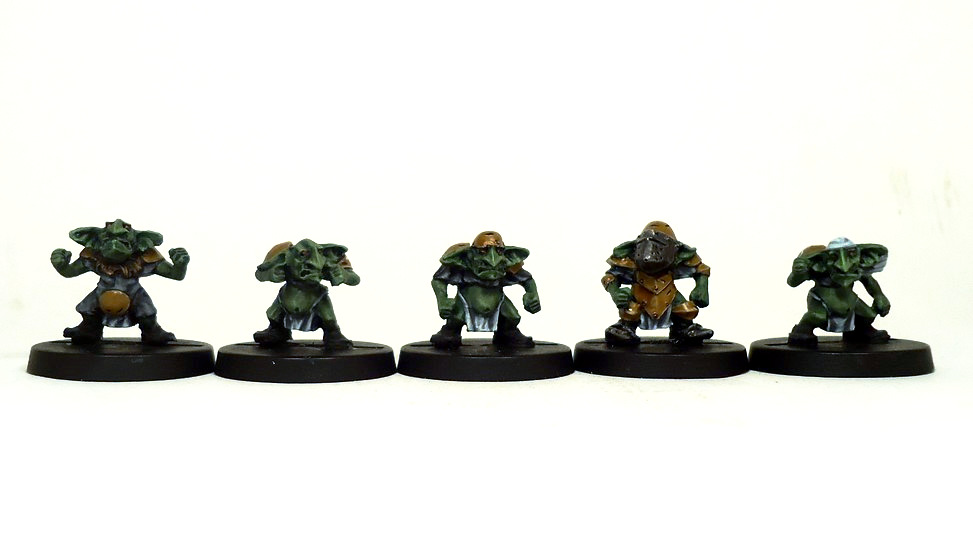 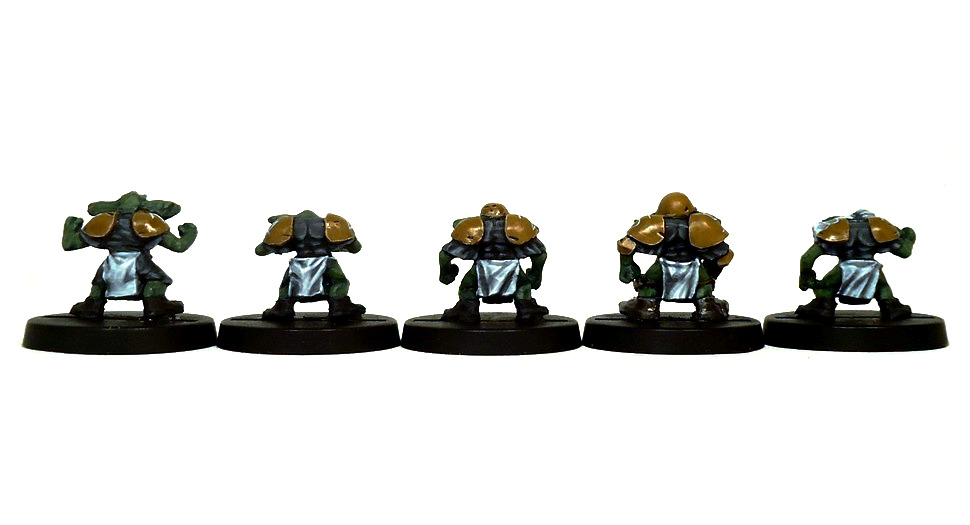 I’ve got more than half the month to paint up the last 3 snots and final ogre. Ideally I can get Bertha completed this month as well. I like the colour scheme on this team and still want to add some extra details to the star players. They already look pretty unique compared to the other players, but stars should really stand out. Brick in particular will need some extra details as he’s needs to be an ogre star thrower to stand out from the normal players I have converted to appear to be a catcher, blitzer and blocker.
Posted by garyt1 on 2019-03-14 02:08:02
Superb Ogres. What range are they? Great work on the skin and armour too.
Catcher is an odd one but looks cool.
Posted by Wozzaa on 2019-03-14 03:11:52
Amazing!
Posted by Wozzaa on 2019-03-14 03:14:45
Missed the lil thank you on the last blog. All good!! Damn I wish I could paint like this!
Posted by Kondor on 2019-03-14 08:56:34
Spubba - If you get a chance, could you post a blog on how you photograph you minis. Camera, setup, etc.