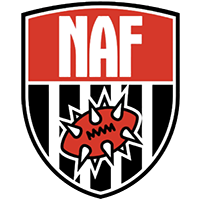 The NAF is an international association of players dedicated to Blood Bowl. The NAF acts as a central resource for coaches the world over – offering news, contacts, discussion, sanctioned tournaments and international player rankings. Whether you are planning to run your own tabletop tournament, looking for a league or just wanting to catch up on the latest from the world of fantasy football gaming, the NAF aims to provide everything you will need.

You can visit the NAF at thenaf.net, or join the NAF here.

The NAF and FUMBBL are proud to announce the Online Welsh Open 2018! This rulespack should contain everything you need to know to enter the first Online NAF sanctioned tournament including Khorne and Bretonnians

• The OWO18 will be a resurrection style tournament, initially consisting of 5 games of Blood Bowl contested via the Swiss format
• Swiss groups of approximately 20-30 teams formed according to timezone will run concurrently, and an overall winner crowned via playoff (see more details on tournament format below)
• Round 1 will begin at 22:00 Server time on Monday, 4th December, 2017
• Each round will last 1 week, and rounds will begin at 21:00 GMT on each Monday of the tournament. Over the Holiday season there will be 2 weeks (from 25th till 8th of January)
• Afterwards there will be a playoff for the 4 best placed after the group stage
• The OWO18 is linked to the Welsh Open, one of the UK’s largest tournaments. Details on the Welsh Open 2018 can be found at the end of this rulespack

• The 24 + 2 NAF approved races will be permitted to enter the OWO18.
• This means Bretonnians and Khorne will also be permitted!
• Simyin will not be eligible
• Each coach has 1,100,000 gold crowns with which to create a team. You may spend money from your treasury on inducements, and these then become a permanent part of your team
• All inducements are permitted except Special Play Cards and Team Wizards. Teams must hire 11 rostered players before adding a Star Player
• Before the tournament, you may select a package of skills. All skills will be available from the first game:
• Normal teams:
a. 8 normal skills
b. 1 stacked skill and 5 normal skills (and 1 dummy skills)
c. 2 stacked skills and 2 normal skills (and 2 dummy skills)
d. 3 stacked skills (and 2 dummy skills)

• Skill details:
• A stacked skill means 2 skills on one player, one of them may be a double
• A maximum of four duplicate skills is permitted. For example, a maximum of four players may be awarded the Block skill, not five
• Once a player gains a skill, he will keep it for the rest of the tournament
• Star Players may not be given additional skills
• Due to technical reasons, everyone will be forced to choose all 8 skills, even if they go with packages b, c or d. These skills must be dummy skills.
• If player already has a skill which he has access to:
=> Choose that skill (skinks dodge, dwarf blockers block, ...)
• Normal skill only access players:
=> Kick-off Return or Pass Block (zombies, skaven linos, orc linos, …)
• Agility skill only access players:
=> Sprint or Leap (Elf Linemen)
• Strength skill only access players:
=> Juggernaut (Ogres, Tomb Guardians, etc)
• While this is not 100% idiot prove, we'll try to check all the teams as good as possible before the start, but it's also each player’s responsibility to check the opponents team before starting the game.
• Intentionally abusing this rule and using dummy skills in gameplay will result in forfeit for the opposing player.

• The OWO is a ‘resurrection’ tournament. This means that your players will not gain spps, and that teams will ‘reset’ following each match. Injuries and deaths do not carry to the next game, new players cannot be purchased and raised Zombies and Rotters are not added to the roster

• Teams will enter the OWO with the intention of playing in one of three timezones (European, American, Oceanic). This should ensure coaches can schedule games at mutually convenient times
• You do not have to live in one of these timezones to participate in it! Select the timezone that suits you best
• We will need a minimum of 12 Players in a timezone to create a group. With less than 12 applicants, the applicants of that timezone may opt to play in a European timezone group.
• Due to this reason, the deadline for the NA and Oceanic timezone will be 1 day earlier on December 3rd, so in case the timezone group is not created they will have Monday to apply to the European group.
• Applicants will be split into ~ 20-30 team Swiss groups according to timezone
• The winners of each Swiss group will be entered into a knockout playoff to crown an overall winner
• Depending on the number of applicants, the best second placed teams may also be entered into the playoff. Final playoff details will be made available when the tournament kicks off
• There will also be a Stunty Cup final between the two highest placed Stunty coaches (Goblin, Halfling, Ogre, Underworld with no Skaven)

FUMBBL Team Creation and Application to the Tournament

o Teams should be made via this link

o On the team page, there is no need to change ‘Progression’ from ‘Standard’ to ‘None’

o Select all of your players, re-rolls, etc. and click ‘submit for approval’

o Ensure your team complies with the FUMBBL disclaimer pop-up

o When ‘save’ is pressed to confirm your skill choices, there is no pop-up or conformation screen. You can check your skills have saved correctly by navigating away from the screen and then checking ‘Team Options’ on your team page

o NAF coaches should record their NAF nick (if different to their FUMBBL username) and NAF number in the team bio section following team creation. This will help us in the future recording and ranking of online games

o When you play a match in the tournament, select your listed inducements when the client loads up as you would normally by spending your remaining treasury as petty cash

o In the event that non ‘rostered’ inducments are selected in the client by a coach, the match result will be void and the game awarded to the opponent

o In the event that dummy skills are used intentionally by a coach, the match result will be void and the game awarded to the opponent

o When teams have been created, they should be applied to the group according to your desired timezone

• Tournament points will be awarded as follows:

o 2 points for a win

o 0 points for a loss

o 0 points for a forfeit or concession

- The organizers keep the right to ban players from future tournaments if they are conceeding without any real life reason.

• Tie breakers will separate teams on the same number of points as follows:

o For all other positions - net TD + net CAS

o Please endeavour to complete your games. PM your opponent as soon as you can and organise a time to play

o If agreeing a time is proving difficult, PM your division admin as soon as possible

o Games will be forfeited promptly to begin new rounds

o In the event you forfeit a game, we reserve the right to temporarily exclude you from future NAF sanctioned online events for a short time

o Even though a NAF membership is not mandatory, we highly encourage to become Member of the NAF, because:

o 10$ paypal of 5$ in person should be doable for everyone, already to just to support the NAF.
o Tracking your online rankings and enabling your opponents to play for their ranking is always fun
o You get goodies every time you renew your membership

Please see this FUMBBL group for useful links and FAQ.

What is the Europen?

The Europen is a side event of the Eurobowl, held annually except on World cup years to battle it out in teams of 3 for those who do not make the 8 player national teams of the Eurobowl.


The Road to the NAF Chapionship 2015

The Road to the NAF Championship 2016

The Road to the NAF Championship 2017

A useful blog by Azure on online match scheduling etiquette

A GLN article on the future of online NAF events

Q: When are the online NAF Rankings happening?
A: Part of the rankings are uploaded and can be found here

Q: Why haven't we got tiered rulesets yet?
A: Coding tiering of skills / gold / both is non trivial. We hope to bring you this functionality soon.

Q: What about format X?
A: Strider84 is always up for ideas, and you never know, format X might be in the pipeline! Remember - tournament functionality is open to everyone, so you can always have a go yourself in the mean time.

Q: I organise a tabletop NAF tournament. Can we speak about doing something online?
A: Sure! Contact Strider84. He'd be happy to hear from you.