The match between The Tylean Tyrants and The Zharrduk Juggernauts had been highly anticipated, I knew this was not going to be an easy win. We both had burned a lot of cash on the match; my fame (and a lot of cash) managed to bring in no other then Morg 'N' Thorg and a wizard. Zharrduk had flexed their monetary muscle as well and brought in Hthark the Unstoppable plus one of their dreaded lava mongering wizards.

The kick off went surprisingly well. Malthor put all his men in a broad offense in an attempt to dominate by sheer strength with a focus on the top side of the field, a solid strategy. The kick off result showed the Tyrants to be in perfect training, it was a perfect defense. Tyrant captain Areme shouted out a few orders and in mere seconds the entire team had repositioned, putting the Juggernauts in for a very hard ride. Malthor started out with a clean box in the middle, and it was not long before I put my wizard to work bringing down his troll, Hthark and 2 CDs leaving a small hole in his 11-man cage. I managed to slip two men through, 1-die blitz his Bull Centaur Kzakorag who had ball possession and grab it with my blitzer Tyrone. It wasn't to be a goal just then though, the next few turns the play was high risk with both teams failing critical rolls (me failing a stand firm dodge with reroll and Malthor failing his 3+ pickup with Sure Hands). Out of the five players I had with me on my rush for the ball, only two linemen remained. Both blitzers and my catcher had been KOed while Malthor still retained five players on the defense - three CDs, his ag3 bull centaur and a Sure Hands hobgoblin - the ball seemed lost to the Tyrants. At this point, the Tyrants had seven players on the field, the KO box was nearly full. Malthor failed 3 ball Sure Handed pick up rolls and had left the pick up attempts nearly unguarded, making one lineman pick up the ball and run down for a TD. It was a high risk maneuver involving a dodge, a 1-die blitz (just a pushback was needed), and a GFI (pic1). With a turn 6 score for the Tyrants, Malthor decided to use the two last turns of the first half in an attempt to pound on the Tyrants. He didn't move a single guy into a ball scoring position, instead trying to pound the Tyrants for a better chance of scoring in the second half. The Tyrants fans saw this and beat the ref into submission, giving the Tyrants yet another advantage on the kickoff. Malthor was first on the fouling board with his dirty player putting the Tyrants' ogre Mowen into the badly hurt box. The Tyrants' follow up fouls KOed a CD and niggled Malthor's only DP. 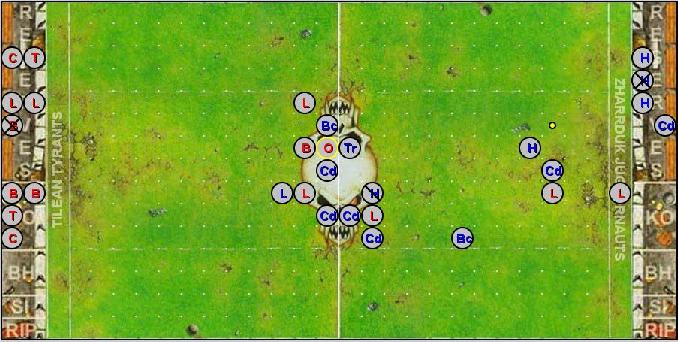 A daring and succesful 1-die blitz to get the ball is succesful!

2nd Half: The Tyrants strategy was an all out defense, the safest way to win the match. Malthor's wizard changed the situation quickly though, opening a hole for a BC blitz and the ball was in the clear. Malthor had the score set, but he decided to try for a touchdown delay with the ball on his bull centaur (pic2). It might not be obvious but it was a simple maneuver getting the ball: a dodge with an ag4 thrower (took the reroll) for the assist and a Stand Firm dodge/blitz gave a 1-die knockdown on the bull centaur. The captain once again showed his team how Blood Bowl should be played - the bull centaur was stunned! Malthor failed to bring the captain down and the Tyrants' next turn can be summarized by a handoff to an ag4 NOS thrower, a long bomb and a catcher dashing out in the clear with only 1 non-tackle bull centaur able to reach him. The BC was ST5, however, and managed to bring down the Blodge Side Step catcher (not unreasonable), he however failed to stun the catcher who dodged out, picked up the ball and scored the next turn (turn 7). Malthor decided again to use turn 7 and 8 for beating on the Tyrants to get some few SPPs out of the match, while the Tyrants were on a very deep defensive setup. The Tyrants won the match 2-0. 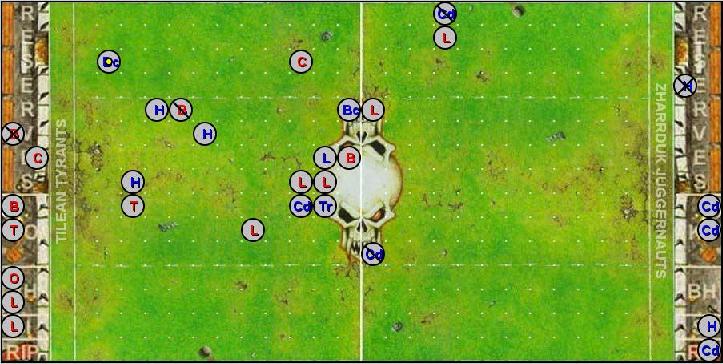 A decision to stall proves costly!

Thoughts after the match: I had never thought that I would leave the pitch with my apoth still ready. I had definitely expected more fouls from Malthor, but two fouls each, rated this game (as Wuhan would say) fair play! Malthor did not fare as well, he used apoth on a BH bull centaur early in the game, this cost him a niggle on his dirty player and a killed Guard Mighty Blow chaos dwarf. I had also expected a very boring match, but the Tyrants managed to dominate the style of the match, meaning insane maneuvers and the ball moving fast both ways on the pitch. Wizards definitely had a huge impact on the match, but the star players Hthark and Morg didn't really do much. In the first half they just beat on each other (ST6 vs. ST6) and the second half they both got tangled up in the midfield, beating down but doing no injuries and not really influencing the ball play.