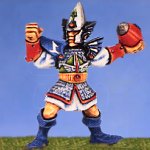 General observations:
Playing Elves, any variety dark, high, wood or plain, is a tricky art. Having tried my hand at it with some success, I've been asked to share whatever insight I have achieved on the way.
The most important point is attitude. With Elves, the mind must always be focused on the ball. If you let yourself get distracted by bashing the opposition, disaster is imminent.
Second point is not to be seduced into foolish plays, simply because your players have high agility. The agility should be used to increase your safety margin, not as encouragement to take unnecessary risks. This is especially true on offence, since the defence of the Elves relies on hit-and-run tactics which are inherently risky.

Offensive play:
In my opinion, Elves should generally aim for a two turn touchdown, as any attempt at stalling is likely to result in players off the pitch. If possible, I like the classic flanking move, pouring as many players down one side of the field as I can. The aim is to cut the opposition off from your way to the end zone. If you can achieve that, the TD is almost in the bag. Of course, you should not be afraid to surprise an opponent with a running play, at least against light opposition. 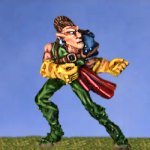 Defensive play:
This will, naturally, be highly dependent on the nature, and actions, of the opposition. A few general pointers can be given, though. When playing a against a team attempting a slow drive, it is important to keep most of your players on the right side, between the ball and the end zone. If you get out of position, you will be virtually helpless. While you aim to keep your players out of harm's way, you must not be afraid to commit as many as it takes, if you see a chance to get to the ball. In addition to possibly gaining possession, this has the advantage of causing a complicated situation which can, with some luck, force the opponent to score earlier than he really wants. Agains fast teams, typically Skaven or other Elves, your best hope is to blitz the most dangerous reciever, crowd the others as best you can, send a player to threaten the thrower and hope for a failure. In general, your aim should be to force him to roll as many dice as you possibly can. 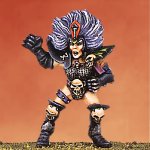 Skill choices and team design:
A key factor in keeping your team competetive, and alive, at higher team ratings is your skill choices. Firstly, what distinguishes the Elves is agility access of the Linemen, or Lineelves to be precise. It's imperative that this potential is used to the max. A consequence of this is that you should always score with a Lineelf if possible, as well-developed Lineelves are the hallmark of a good Elven team. For the LoS, you should aim to have players with Blodge (that means the combination of Block and Dodge - ed) and Side Step, for maximum inconvenience to the opposition. In fact, Side Step is the single best defensive resource available to Elves, and should be used as much as possible. If a Lineelf rolls a double, there is only one choice: Guard. For Throwers, I usually go Accurate, Safe Throw and Sure Hands on the main offensive one, taking Strong Arm on a double, and Sure Hands, Block, Dump Off on the other, then using a double on Nerves of Steel. For Blitzers and Wardancers I like to start with Tackle, then Dodge, Side Step and Shadowing. This works nicely also for Lion Warriors and Witch Elves, provided they get Block first. Also, at least one Leaping Strip Ball player is often a lifesaver. On a double a Blitzer should get Dauntless for taking out those ST4 ball carriers. 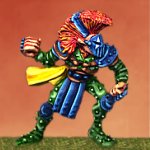 Final conclusions:
These guidelines are general, and they will not make anyone a great Elf player. That comes only with experience. It takes many games to learn to see the potential plays and execute them accurately. However, perhaps they will give novice players an idea of the basics, and something to reflect on when devising their own strategies. Best of luck to all Elves out there! ;)