Every issue of the Grotty Little Newspaper we'll bring you a full description of one of the most exciting games played recently in the FUMBBL divisions, as transcribed from the call by the Necromancers Broadcasting Circle (NBC). This week, it's a real humdinger, full of drama, tragedy and a bit of comedy.

RO: Welcome back to NBC, I'm your host Ralph Orlovami, along with match caller Jimmy Talaydee and special comments man Ken Owthididd. We're here today for the Blood Bowl match between promising orc outfit the Black Crag Brawlers and the plucky little group of halflings, the International Chef Association. Jim, what can you tell us about these two teams?

JT: Thanks Ralph. The Brawlers are coached by Jezlad: a formidable FUMBBL veteran with an all-time ranking in the top 30, an 85% winning record and a history of coaching fearsomely tough teams to brutal victory. Then we have Xoota, coach of the Chefs, whose record isn't so hot, Ken.

KO: That's right Jim, Xoota is a FUMBBL greenhorn, having won only 4 of his 28 games to this point. The numbers may be against him Jim, but I predict big things from this coach, I think Nuffle might be with him today.

JT: We shall soon see, for the kick-off is about to take place, with the Brawlers receiving and 61,000 fans cheering madly. Oh, and the kick lands right in the end zone, nice start for the Chefs. The Brawlers start cautiously, only knocking down Maître, the Chef's ogre, and their thrower Narlog Da Lobba successfully picks up the ball.

KO: This is promising for the Chefs Jim, the orcs look a little tentative.

JT: And here comes the Chef treeman Leña para el fuego, and he knocks out a black orc! Three other halflings knock over orcs, including a stun! Now the orcs throws one of his little teammates, keittäjä, who lands and runs interference on the thrower. Great start!

JT: The orc thrower knocks over his opponent and runs on, with Virag Necksnappa and Erlag in support. The rest of the orcs get up and move into blocking position.

KO: Boy, the Brawlers don't look as fearsome as most Jezlad sides at this stage.

JT: keittäjä gets up and blitzes Narlong, but only succeeds in pushing him back. The Chef's ogre knocks out another orc! The other flings push the orc line away and set up a long defensive wall.

JT: Virag knocks over keittäjä and Narlog rushes towards the line of scrimmage with the ball. Now Ghazgol 'Eadsplitta blitzes the nearest hobbit, and injures him!

JT: That evens the game up a bit, although there are two Chef reserves. But now the flings try some blocking of their own, and they only succeed in hurting themselves!

KO: Yes Jim, Cuisiner tried a desperate hit on Zorga, but he came off second best.

JT: Ghazgol blocks again, and another hobbit goes into the injury box! That's three in a row!

KO: The Chef's apothecary is too busy dragging them off the field to heal anyone, Jim.

JT: Grool Snotlinscoffer tries a block as well, and it's ANOTHER injured fling!! FOUR in a row now! The Brawler's fans are going crazy in the stands!!

KO: I haven't seen this many injuries since the last time I was late in my alimony payments, Jim!

JT: Narlog advances with the ball and the orcs form a cage around him, kocking over the treeman as well. What can Xoota do to stop the carnage? The hobbits rush to break down the cage. First it's Póvar stunning a black orc, and now Maître the ogre goes after that nasty Ghazgol! Maître knocks over the orc and ends up next to Nargol.

KO: He's getting dangerously close to the sideline though Jim, and the Brawlers fans are waiting for him...

JT: I think Jezlad has seen that too Ken. Ghazgol gets up and pushes Maître to the sideline and... Narlog pushes him into the crowd, and it looks like the ogre is injured too!

KO: He's got orc fans swarming all over him Jim, it's like he's being attacked by killer bees! We won't see him again today!

JT: Back on the pitch, it's nine Brawlers versus six Chefs. The little hobbit kuiristo tries to hit an orc, but he falls over! They're having no luck today! Narlog races down the sideline with an army of orcs in support. And now buc?tar goes down injured as well! Ken, did you see what happened?

KO: Yes Jim, it was Grool Snotlinscoffer again, that's his second victim of the day.

JT: Now it's Morglum Spinetwister to try his luck at toppling the treeman and... praise Nuffle, he did it! Leña para el fuego has been seriously injured, now the apothecary tries to heal Leña's damaged back... but he fails!

KO: That's going to be a nasty niggling injury that could flare up in future games, Jim. 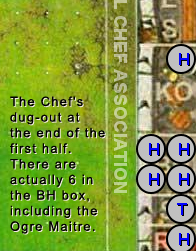 JT: That good-for-nothing healer has walked off in a huff. Nothing is going right for the poor Chefs. They're down to four players on the pitch with two reserves. But what's this? The brave little hobbit Kok tries a desperate blitz on Narlog!! And... OH NO, he's hurt himself as well!!!

KO: There seems to be a party in the injury section of the dug-out Jim... they're having dumplings and profiteroles.

JT: They'll get a kick up the back side from the coach for their performance today. Narlog skips into the end zone and it's 1-0 to the Brawlers late in the first half. The Chefs set up their 5 fit men.

KO: This can only end in tears, Jim.

JT: The little halfling Koch waits back to retrieve the ball... he picks it up, tries a pass... and keittäjä catches it despite pressure from Morglum Spinetwister!

JT: Póvar tries to run through the defensive line, but he's tripped and knocks himself out! Virag Necksnappa blitzes keittäjä and...

(There is a resounding crack)

JT: The crowd are going completely bonkers, the Chefs are down to three fit players late in the first half. Narlog tries to pick up the loose ball, but he fumbles. Now one the halflings, I think it's cuoco amongst all those big orcs, he dodges past the line of scrimmage and tries to pick the ball up too! Aww, he dropped it... (a klaxon horn is barely heard above the deafening roar)... and that's the half time hooter!

KO: Well Jim, what a half. Nine injuries and one little halfling not recovered from concussion, it's been a slaughter out there today. The Brawlers have certainly lived up to their coach's reputation for brutality and ruthlessness. I can only expect the second half to be more of the same.

RA: We'll be back for the second half after these messages...

RA: We're back for the second half, so without further ado here's Jim and Ken...

JT: Thanks Ralph. It's a sorry sight as three little hobbits - cuoco, Koch and kuiristo - stand at the line of scrimmage against ten mean green orcs. There's the kick-off, with no one back to catch for the Chefs... kuiristo dodges away to retrieve the ball, and he picks it up easily. Cuoco tries to go back to help him, but he's triped up and knocked out!

JT: Virag goes after kuiristo, but he can't bring him down! The other Brawlers run to support, with the ball carrier pinned against the sideline. Koch dodges away into the back field, and kuiristo skips away from Virag to join him! Not only that, kuiristo succeeds in passing the ball to his only remaining team mate!

JT: Grool Snotlinscoffer tries his luck at a blitz, but he can't bring Koch down! It's going to be hard to get out of that nest of orcs though.

KO: I can hardly see the two Chefs among all those Brawlers. No wait, here comes Koch now!

JT: Yes Ken, he's found a way out of the scrum into the clear again! kuiristo tries a desperate block, and pushes Erlag away! Amazing!

KO: The half time talk from Xoota must have been inspirational, Jim.

JT: Ghazgol 'Eadsplitta is the next orc to try a blitz... and this time he's knocked Koch out! That leaves only kuiristo on the field for the Chefs! The ball spills out next to the sideline, but the ocs are concentrating on the only opponent left. Three of them try hitting him, but he dodges each one. Narlog goes to pick up the ball... but he fumbles it into the crowd... and it gets thrown towards the Brawler's end zone!

KO: Come on kuiristo, you're the Chef's only hope! 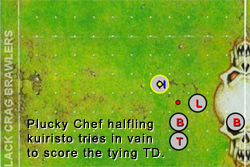 JT: kuiristo dodges away from three orcs, and HE PICKS UP THE BALL!!! THE CROWD GOES CRAZY!! You can see the strain on his face as he runs as fast as his pudgy little feet can take him!

JT: Now the entire Brawler team come thundering after him! Ghazgol gets to him first, but kuiristo is only pushed sideways! The rest of the team can only watch in terror as they run in support! The crowd is suddenly shouting for the brave little halfling, getting the better of an entire orc team on his own!!

JT: Now kuiristo tries to dodge away from Ghazgol... BUT HE FALLS OVER!!! OH, WHAT A TRAGEDY!!!

KO: UNBELIEVABLE! He'd done all the hard things, and when all he had to do was dodge away, he failed when a glorious draw was beckoning.

JT: The Brawler fans suddenly find voice again as Narlog tries to pick the ball up... it bobbles a bit... but he has it in his hands! He tries to pass it to Ghazgol... but the orc drops the catch!

KO: kuiristo still has a chance! GET UP!!

JT: The single halfing gets up and tries to find a way through the orcs... but he falls down again on his first step! How unlucky!

JT: Narlog succeeds this time in picking up and passing to Ghazgol, who sprints away towards the end zone. Now kuiristo gets up again, he tries a last-gasp blitz and.... HE'S SERIOUSLY INJURED!!! It looks like the same spinal injury that the treeman suffered earlier in the game, and there's no one in the dugout to cure him. There are no halflings at all on the field now, and Ghazgol takes his sweet time in prancing down the middle of the field unchallenged to score the Brawlers' second touchdown, with the orc fans in the stands singing the team's theme song at the top of their lungs.

JT: It sure is, and I've been told the full time siren has sounded, although you probably can't hear it through the cheering. What were your thoughts on this historic occasion, Ken?

KO: All I can say is that I'm glad I wasn't out there facing those orcs. They can look forward to a few lucrative sponsorship deals if they keep playing like that. As for the Chefs, the fans love them, but I think there will be a few sad and sorry young hobbits licking their wounds this evening.

JT: That's it from the game today, with the Brawlers ending up 2-0 winners. Back to you, Ralph.

RA: Thanks Jim. That's all we have time for today Blood Bowl fans, see you next time we saddle up the pigskin.