Group managers: knine
Create team for this league
This league group hosts a variety of Secret League Blood Bowl tournaments and leagues - depending on what is flavour of the moment. For games played in Oceania tmiings (Australia-New Zealand).

The current DAWGZ tournament: This is the DAWGZs first foray into 2020-land. There's been a flurry of activity on FUMBBL in the competitive division, but it's been super quiet on the Secret League side and the stunty side. So, DAWGZ brings you:

Rules for Secret Dawgz:
- open round robin tournament (play whenever you want and in whatever order suits you);
- Starting tv - 1000k - using the Secret League 2020 (provisional) rule set (2198).


This tournament is running. Anyone that wants to swap out a team may do so at any point. If you want your team to remain in consideration for the Secret DAWGZ tournament title, just pm knine before you pull the team and I'll note the record when you left.

The Secret DAWGZ tournament will run until OSBBL starts its next season (Jan-Feb 2022). Maybe, just maybe, you'll be able to use your Stunty Dawgz team in OSBBL when OSBBL converts (if @Trickey - Osbbl Sheriff is nice). (Trickey - can you pin this to this channel?) PM knine if you want in. 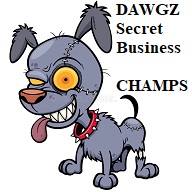