NO PLAYER RETIREMENTS: The Warpstone Kings own these pathetic beasts. If they want to see a player with a broken back dragged onto the field to be Line of Scrimmage meat, then that is what will happen. The only escape from the catacombs is death. The agonised cries of pain, the meaty slap of blocks and the snapping of bone fills the Warpstone Kings and their retainers with joy. For what else are these pawns for? It's why there's a spiked ball.

INDUCEMENTS: So far there are no stars, but lets see how we go. Everything else goes really. But teams get 1500k to buy with so it should all be pretty even.... at first.

LEAGUE RESTRICTIONS: The only restrictions Nuffle's Rejects places on teams is that no games may be played outside the League. AS WELL AS ALL THE OTHER RESTRICTIONS WE PLACE ON THEM.

EXPECTATIONS: Yes, it's supposed to be competitive. Yes, the team is dumb. Is it balanced. Hell no. But you'll be playing the same roster so it's up to the dice. But most importantly its supposed to be about fun and wrecking other peoples teams with your giant monster team. The intention is a fluff heavy league with a rich history and teams with longevity. Match reports after games will be encouraged, team names need to fit in with the spirit of the league and pitch art will be provided for teams.

GROUP TIMEZONES: Nuffle's Rejects is an international league. All coaches are expected to be able to arrange the game at a time that is reasonable for both parties in a mature fashion. Only game offers with reasonable times will be taken into account for forfeit decisions.

GAMES FREQUENCY: Games are to be played according to the schedule - which is pretty loose right now - If you are able to play ahead then feel free to do so. Extensions will be given where possible to cover holidays and the like based upon a reasonable amount of time and notice.

FRIENDLIES: Friendlies will be playable during the Pariah Plate Playoffs , you must let league staff know about your friendlies, and the friendlies must be played by the end of the Plate.

DROP OUTS AND RETIREMENTS: We kindly ask that you do not drop out of the league or retire your team during a tournament (be that league or cup). Drop outs will not be allowed back into this group. If a team has become wholly unplayable and you consider it must be retired then, we will fudge the finances and allow you to rebuy a team. This is at league administrators discretion but we are here to have fun, right? RIGHT?! And its a survivalist league so thats gonna have to be one very dead team.

SPIKED BALL: Yes. It is.

WIZARDS: Yes. There are.

FOULING: It pleases the Warpstone Kings. Greatly. Therefore Sneaky Git works as Guard for fouling and the cheeky little buggers can skulk away to the KO box if sent off by the referee. I mean, slaves all look the same don't they?

TURN 16 FOULS: Would be made compulsory if it were possible.

NO TIMEOUTS: Because that is rude.

NO CONCESSIONS: Because that is rude.

The Pariah Plate marks the start of a new season. It is a best of three games series played between the winner of the Reject League and the winner of the Catacombs Cup. While this competition is on, the other teams may play up to three friendlies against each other.

The Reject League is the main league. Games with spiked ball.

The Catacombs Cup is a knockout tournament. A randomly determined prize is awarded to a random player on the winning team each season.

PM interest to Happy_Amateur.
Choose a team name from the list provided.
Create a team through the league page - this team can have any old name, we will change it to the name chosen to circumnavigate any issues there.
You is in. 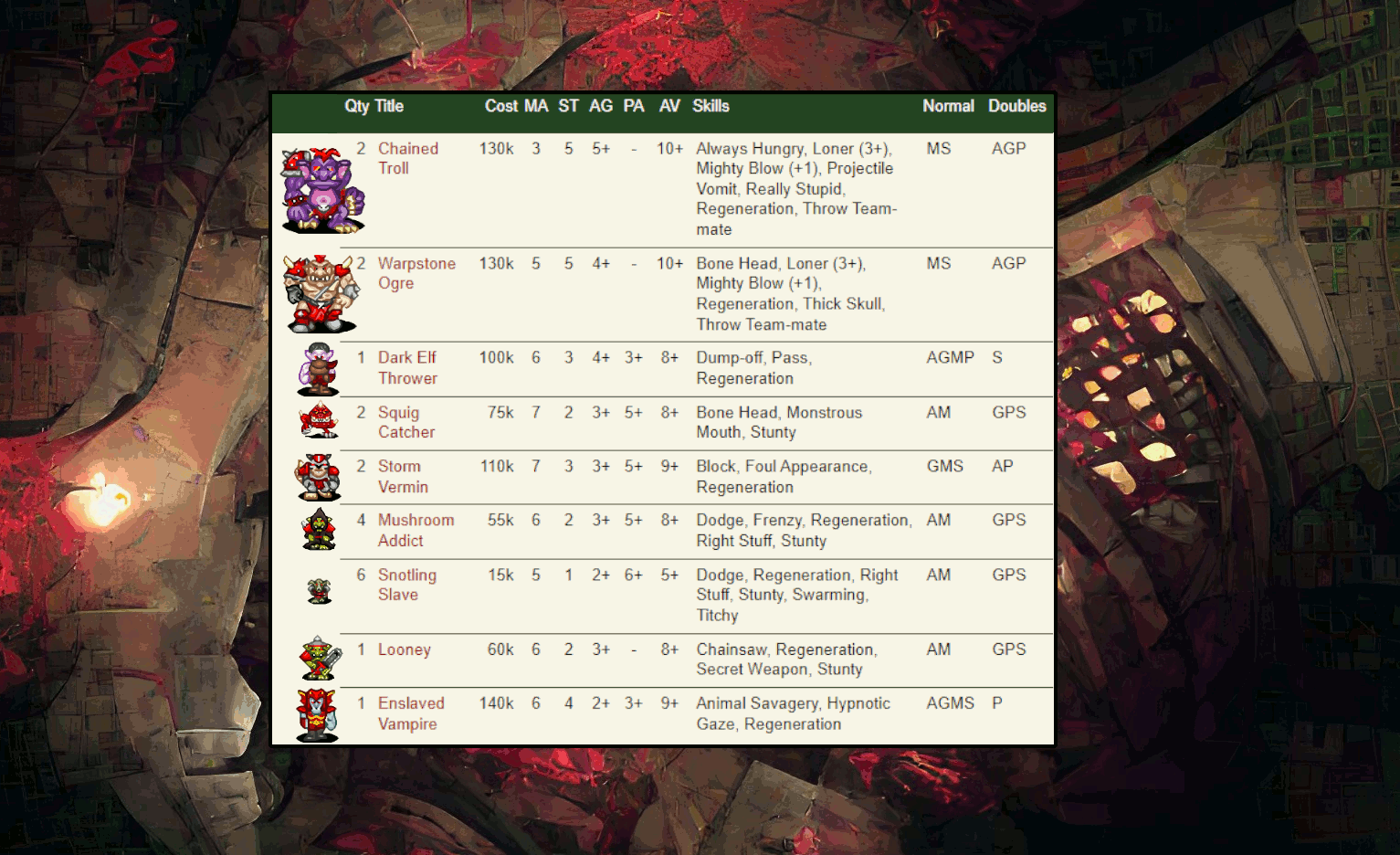 FUN FACTS FOR THE KIDS:

FUN FACT 1:
The first ever Nuffle's Rejects game was played between the Mordheim Marauders and the Underworld Slavebois.
The first ever touchdown was scored by the Slavebois Skaven Blitzer Scratchy, while his offsider Itchy received a terrible head injury. The Slavebois won 2-0 but we don't talk about that.