71 coaches online • Server time: 23:26
* * * Did you know? The most valuable player is Thursdaynight Guitarclub with 96 MVPs.
Log in
Purplegoo
Last seen 1 hour ago

This is your last call to apply to the Spike! Magazine Showdown. We kickoff on Monday.

I'm now out of the loop for a couple of days, but rest assured, if you apply before the deadline (22:00) you're in. Looks like it will be one of our smaller events; you'll never have a better shot at it! 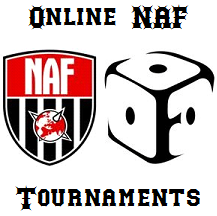 It's Online NAF Blood Bowl time again! The Spike! Magazine Showdown will begin in two weeks on June 27th. Be a part of Canadian BB action!

Our third online NAF tournament of 2016 will see us partner with the Canadian NAF Major tournament, the Spike! Magazine BB Championship! This post should point you toward everything you need to know to enter the Spike! Magazine Showdown (SMS), and compete to win physical, Spike! themed prizes.

The Spike! Magazine BB Championship is one of the five yearly NAF Major tournaments. It is held in British Columbia, Canada. This year, the Spike! will be held over the weekend of August 26th / 27th, and will use the much heralded Ironmanj ruleset! The Spike! is held in a beautiful part of Canada, and Steve and the Thunderbowl team put on a superb show. A trip out to BC is more than deserving of your holiday time! Further details can be found at the Spike! website, here. Sign up NOW!

- The winner of the SMS will receive a free ticket to the Spike! Magazine BB Championship, BC, Canada, worth $50

- In the event the winner cannot attend the Spike!, the prize will be offered to the winner of the North American timezone group (should he not win the playoff). This prize is now available in perpetuity. The winner may cash in any year!

- One coach using a tier 2 or 3 team that has completed all 6 games will be randomly chosen to receive Spike! themed prizes

- The winner of the Stunty Cup will also receive a Spike! themed prize

I will accept applications to the group every 48 h. Every tournament, someone misses out on joining us. Don't let that be you! apply, then check the group 48 h later. If you're not there, try again!