We wandered through the colonnade and entered the left wing, which consisted of a long hall, one wall lined with racks upon which hung caps in many different sizes, colours and states of decay. A long row of doors led to the classrooms. Bastian pointed to the first door. “Behind this door our orc students are taking their second year exams regarding the use of secret weapons in a Blood Bowl match. I think we can risk a peek if you promise me to remain silent.”

He opened the door and allowed us a look inside. The room was filled with young orcs each sitting by a little wooden desk. At the end of the room a massive black orc was standing by a blackboard with a notepad. “Is THIS thing allowed inna match?” he asked, drawing a very crude painting of a chainsaw on the blackboard. The young orcs bent over their papers scribbling frantically. After half a minute he continued: “Wadda you do when you see player with this thing inna match?” The orcs scribbled on. The answers ranged from “Hit him over the head” to “Blow whistle”, “Run away”, “Yes” and, for unknown reasons, “I love peacock droppings”. The next question was read: “Is THIS thing allowed inna match?” he bellowed while painting an even cruder version of a banana on the blackboard. This question seemed to cause some confusion among the students, but I never got to read any of the answers as Bastian closed the door again and led us on.

“Mr. Bob is our rules expert and teaches all classes in theoretical Blood Bowl. He has his own ways of teaching the syllabus to the students, but somehow he always manages to do it with a certain style, and all our students seem to like him. Despite his racial setbacks regarding intelligence and reading speed he has earned respect from even the elves,” Bastian told, as we wandered along the hall. “I don’t like to say it, but most elves’ approach to the education they receive here is the same: “We know it all and we don’t care what others might mean.” But most of them are quite idealistic and unexperienced in other races’ perception of the game too, which has forced us to do certain classes for elven students only. They are run as extra courses during the summer holiday and have titles like “Fouling – part of the game?” and “Stalling – good strategy or cheesy exploit?” They are held by Mr. Bob too with help from his assistant teacher Mrs. H. A. Tred, who is an elven witch of the darker persuasion and has a very good understanding of these things. She and Mr. Bob seem to enjoy these courses very much. One of Mr. Bob’s greatest pleasures is to summon some of his old teammates for a little training match against our elven students, where they can get a practical approach to for instance the term “stalling”. When we see them again at the start of the autumn term they are usually a bit less arrogant.” 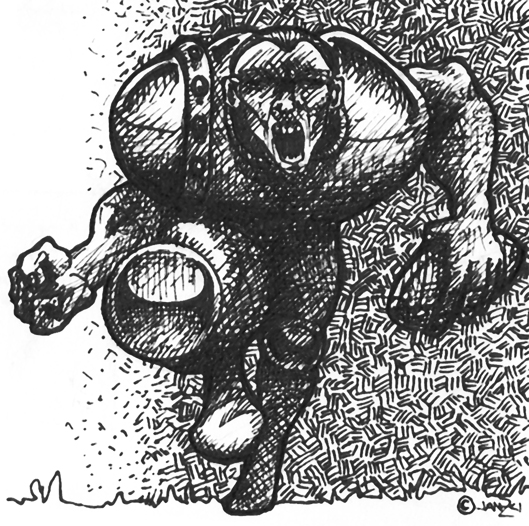 Our walk brought us to the end of the wing where through an immense window we had a great view over the areas surrounding the school. We could see that all kinds of terrain were represented on the premises of the school, as some students had certain demands regarding places to relax. Some scale-clad ones liked to bask in the sun on a stone near the swamp whereas others loved a walk in the woods or a nap in a cool stone cave.

We went back to the central courtyard and headed for the wing opposite the entrance gate. Bastian opened the door and was immediately attacked by a little dachshund in a frenzy of barks, jumps and tail wagging. “Yeeeees, good boy, good boy”, he cheered, patting the dog on the head. “Ladies and gentlemen, meat Stopper our watchdog, school pet and eater of leavings. Officially he is mine but he likes to roam here in the students’ wing and they all seem to like him. Alas, some of our larger students love dachshunds so much, that the dogs sometimes have a very short and abruptly ended life here on the school - I think I’ve had more than twenty of them through the ages. This one basically drools a lot and runs away whenever he sees a fight, but I like him anyway. Please be gentle to him and he won’t bite you.”

Bastian smiled as he led us through the door. This was clearly the dormitory. The wing was filled with rooms of different sizes, organization and decorations mirroring the students’ interests. A huge dining room was in the middle of the building and the largest wall in this room was covered by lots of mailboxes and a great bulletin board covered with posters, advertisements, funny drawings and things like these found on schools all over the world. One of the posters read in capital letters: “Getting got by the fans too often? Try Ronny Rotters antiwrinkle lotion and get a 12’ safetyzone around you for $5 only! Buy them before he falls apart!”

Another one displayed a picture of a huge ogre choking on something. The following text read: “Are you big? Are you hungry? Are you tired of small things like flags, whistles, balls, players and cheerleaders? We now offer you this muzzle. Be able to shout without worrying about things ending up in your throat. Contact us now and get your own hand-sewn model!” Someone had painted a little dachshund next to the ogre and a curvy arrrow pointing from the dog to the ogre’s mouth.

Various handwritten notes could be found too. “Friendly, honest and warm-hearted apothecary seeks female ref for intimate intermatch relationship. I give you nerve pills and you show me how to blow the whistle.” And another one: “Club with built-in signalling flags sold because of retirement. Old school model, flags a bit bleached. Extra nails supplied.”

Students, cooks and various servants milled around – apparently lunch was about to be served. We left the building as we didn’t want to disturb the meal and Bastian led us to the last wing. “This is the hospital wing”, he proclaimed as we entered. “As you know it is indeed a dangerous profession being a referee, and we offer all graduates from the school the possibility to buy a lifelong insurance for medical treatment and care here on the school in case of bodily, job-related, injuries. Naturally we have lots of patients, and our staff is often supplied with extra ressources from the Apothecary Institute District here in Altdorf.”

The wing consisted of one huge room containing lots of beds and different medical equipment. Nurses and grey-bearded doctors visited the different beds, adjusted the various pumps and spoke in soft voices to the patients. We walked down the central aisle as a patient suddenly started to wail. Nurses ran to the bed and tried to restrain the man from climbing out of the bed. “They are coming, they’re after me!”, he screamed and tried to flee. He was held down in the bed as one of the doctors turned a handle on a little pump by the bed and after a few minutes he fell asleep again.

“They’re raising the morphine dose every day now”, Bastian explained. “His name is Matthew Holeson and he’s going mad because he’s been beaten up by the fans in every single match he’s had until now. Sometimes they just beat him up, sometimes they invade the pitch beating up the players and then him and sometimes they throw a rock or something at him. He’s even been hit by the ball once in a match where the kicker was the famous Gorba “Kick-it-long-and-deep” Bladderpounder. When he’s asleep we sometimes say that he now is having the injury time of his life – harharhar…”

The patient beside Matthew was lying still with both arms and legs in bandages. “This is one of our worst cases”, Bastian whispered. "He graduated this summer and was hired for his first match – a friendly one between two dwarf teams. Unfortunately both teams were using the match as a test for their new experiments in the deathroller department and he was the only one trying to enforce the rules. This is the result. My guess is that he’ll be umpiring chess tournaments for the rest of his life.”

We left the hospital wing again so as not to disturb the doctors and spent the rest of the afternoon on the exercise pitch watching a game of friendly and non-violent bloodbowl between two teams of students with Mr. Bob as reinforcement on the weaker side. Lots of students were watching too and once in a while one of them would snigger, nudge his neighbour in the ribs and then shout in a half-hearted voice: “It is called BLOOD Bowl, you know!” The referee was Mr. Flagsmasher who did a good job of waving the flags and blowing the whistle at the right times.

After the match Bastian led us to the gate again and bade us farewell. “It has been a great pleasure having you here today”, he said, “I really hope that you’ll all go home and tell your colleagues about all the things we do to train the best referees in the known world. Remember that both the Blood and the Bowl are there for your pleasure and that each team should be allowed to play the game the way they want to.”

I hope that you, my fellow Fumbblers, will remember these wise words and that you will continue to muster new teams for the best of Blood Bowl and FUMBBL.