Current polls show that Minotaurs really got the short end of the stick on the Rules Review. With that in mind, freelance reporter xJx dared a Chaos locker room post match to interview a minotaur who wished to be called Timmy, in case the BBRC decided to take even greater revenge on his people than they already have. A goblin shaman provided a spell for xJx so he could speak the mino language fluently.

GLN: Welcome Timmy. How are you feeling?

Timmy: Well, to be blunt, blunted. 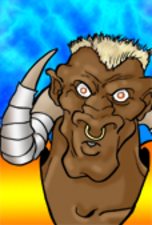 Timmy: Yes. Blunted. I feel like I lost my horns, not just the two small ones you see here on my forehead.
*Timmy points at his 2 HUGE horns capped in mithril and stained in blood coming out of his head*
But the big one too. You know, I used to bounce on a juicy looking target every once in a while when I really got into match. Nothing like piling onto someone with the one big horn to work the blood up and get the fans going! Nowadays that doesn't have the same effect on my foes and I'm left on the ground, bellowing in impotent rage at the cruel fate that has befallen me and my kind.

Timmy: Don't cut me off. They might have nerfed me on the pitch but this is a locker room and I'm standing between you and the door.

GLN: Sorry, didn't mean to be rude or anything.

Timmy: That's right, sorry about the outburst. As I was saying, these new rules of proper conduct on the field are quite ridiculous. For example after I have bounced on some nice looking member of the opposing team they suppose that I'll stand up, bellow in rage and then politely hit the turf and let the play continue. Can you believe this outrage? They expect me to behave like a silly human that just dropped a full Bloodweiser on the ground and watched it get smashed and drain down the sewer pipe, rather then fierce creature I am. I was made to charge around goring people, sending skavens into the stands for the goblins to dine on, exciting the Blood Bowl fans! My status has been reduced to crippled beastman. Put me on the line of scrimmage until I die - no running, no goring, no drama or excitement. If i fall down, there's a good chance I wont stand up again, just like some stupid Treeman on a halfling team!
*Timmy stands up still and impotently bellows in rage*
You're lucky! If I had passed my Wild Animal roll, I would have charged you in an old school Frenzy!

GLN: The entire female population of Finland is lucky as well Timmy. This new Wild Animal rule sounds quite outrageous! What sort of plans do you and your many fellow minotaurs have on handling this?

Timmy: We have sent in some persuaders and hope to get a clarification on this whole "Stand up, bellow in rage, hit the turf" recommendation. We feel that insults the intelligence of our fans and is a bad mistake. We really hope to get it sorted out as soon as possible. There are other issues as well, but I feel like we owe our fans a quick solution on this one. A group of older retired minotaurs have cut their horns off and are picketing JJ's (Jervis Johnson) house. Maybe that will help too.

GLN: A charging wild animal flinging a goblin into the stands was always exciting.

Timmy: Yeah, the fans are what makes this sport so special. I like causing death, destruction and general mayhem on my free time just as much as the next guy.
*Timmy points to his team's apothecary, who is sharpening his scalpel with a religious devotion*
But without the fans cheering me on it just isn't the same.

GLN: That's great to hear. I always love to do interviews with true professionals like you. Any parting words to our readers?

Timmy: Yeah, I'm a pro. Unfortunately, with these new rulings, you probably won't see too many pros in the new generation of minotaurs on the pitch. I feel like you'll be seeing all sorts of tentacled freaks but not too many old school pros. That's a real shame. I also think there won't be as many minotaurs on the pitch as there once were. Chaos teams are going to raid the troll waste more often to capture trolls for their teams, and Norse are probably going to hire up ogres. It's a damn shame I tell you. Praise to chaos undivided!