Hobgoblins Always Win is the translation of the team name for a group of enslaved hobgoblins. They were Enslaved by an unknown Slavelord who demanded that these poor little hobgoblins work their butts off in the FUMBBL League and earn him a cool Million Gold. There is even a rumor that the Slave Lord is a retired Hobgoblin Slave that played for a legendary Chaos Dwarf team The Twinkling Marauders. 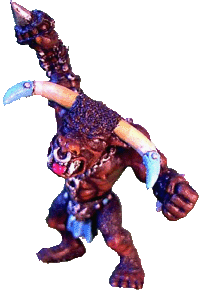 A study of hobgoblin psychology performed by Doctor Walter the Lowlander from The University of Altdorf shows that the concept of losing is indeed unknown to the hobgoblin psyche, hence the yell:"Hobgoblin always win!". A sage once reported an entire hobgoblin army slaughtered by a single Dwarven hero. The sole surviving hobgoblin escaped and yelled to his superior; "We won, we won!" And then was he was killed.

A recent interview with the scared Hobgoblin Hero of the team Heizer, by Dr. Walter the Lowlander, proved that this psychology is indeed true.

GLN: Why do Hobgoblins always win?
Heizer: I tie my own shoelaces every game and therefore I also win every game.
GLN: Why are you so scared?
Heizer: Did you ever have to perform certain pleasurable favors for a minotaur after a match?
GLN: Point taken.
GLN: The estimate is that the Team will quite soon be able to pay off the Million in cash and any donation will be most welcome. Or maybe invite them to a nice rowdy match with loads of fans! One final question for you, Heizer; what will you do when everything is payed off?
GLN: Hey wait! Why are you running? Come back! Are you running away from that Minotaur in heat? Oooh that's gross. Good luck you poor sods.