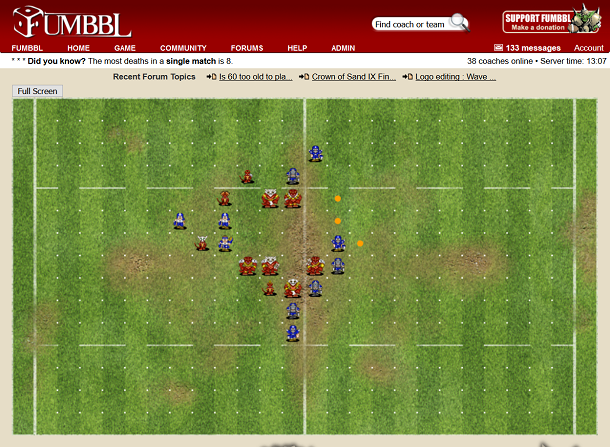 Obviously, this looks very similar to the FFB client, except it's running in the context of the web browser instead of in a separate Java application.

Before you guys get too excited about this, I have to stress that this is *very* early in the development process. It is able to connect to a game, and the players do move around, but that's almost all it does. So what's the plan?

First off, the idea is to make it able to spectate games (which it sort of does now, but obviously it needs to support more things; dice rolls for one..). This will allow me to implement the network communication stack, the underlying data model and come up with a workable user interface (UI) and user experience (UX; how the user interface works) without having to replicate the rules of the game into the client. Long-term, I want to move this client forward to do replays and then finally being able to actually play the game.

Why am I doing this?

A few reasons. The primary reason is that I want to do it. It's a lot of fun to work on something like this, and I get to play with new technologies and work on new architectures, doing things I'm not super familiar with. There's a lot of learning to be done for me, which I truly enjoy.

Another reason is that I have for a very long time been relatively unhappy with how small the current client looks on modern displays. Similarly, the current client is not very friendly for streaming (which is often done in 760p and/or 1080p), which is a problem all on its own.

The current client also requires something called a code signing, which is a frustratingly annoying process (and costs a fair bit of money). Having it in HTML5 will avoid that problem and remove the need for this.

When will it be done?

Good question. I am hoping to be able to have a first alpha version that is able to spectate matches relatively quickly, hopefully by the end of July. It may not support all events in the game, but it should at least handle the core parts of the game. There's a long road to get to that point, including a bunch of architectural work. The latter is critically important but unfortunately takes a fair bit of time and also doesn't produce any visible results.

Also, because this project is pretty large as a whole, I am willing to take on a few assistant developers if there are people out there who are interested in a project like this. The code is currently hosted on a private repository on Github, with a small group of people able to see it. If you are honestly willing to help out with the project, and have time to do so, feel free to send me a private message and we can talk. For reference, this code is written in TypeScript and uses Phaser3 for rendering. If you're only interested at looking at the code because it's fun, please wait until it's fully open sourced. For now I only want to talk to people who are genuinely interested and capable to contribute to the project.

My plan is to dedicate a lot of time during my vacation from work to this (which effectively means July). If there is interest, I may do a few developer streams for this on the Youtube channel.

I'm quite interested to hear what you all think of this project. Even with the small amount of code that's in place right now, it's very exciting to see a web application talking to the FFB server and see the players move around the pitch.
Posted by bghandras on 2018-06-28 14:34:39
I would absolutely love the concept of web based game. It allows a lot on the users side in a corporate environment. XD
Also it is also something for the scaling of the client which is quite significant. I think if the game can be played in the browser, then more coaches would play on fumbbl.
Posted by PurpleChest on 2018-06-28 14:40:33
jaw to floor.
I currently have to seriously gimp my laptop display to play fumbbl, or the pitch would occupy about 1/20th of the screen. This would ROCK, though it may end my days of multiple clients on screen, i presume it will cope with multiple tabs.
Posted by neubau on 2018-06-28 14:55:12
followed the discussion on discord and i'm absolutely delighted with this. whenever i talk with fellow fumbblers about our lovely sites' future the biggest issue was always the small client. working on this is a huge step in the right direction and i'm looking forward to see the first results!
Posted by Christer on 2018-06-28 15:14:54
The intent is to allow full-screen view (not currently supported on iOS though), and there's a case to be made for having a set of large-scale icons (possibly SVG) in the extension.
Posted by Sp00keh on 2018-06-28 15:43:58
https://imgur.com/RJ6S6eY.mp4
Posted by Sp00keh on 2018-06-28 15:52:32
Also is it possible to convert existing pixel art icons to vectors, using something like vectormagic or pottage?
Or are the icons too small
Posted by Christer on 2018-06-28 15:53:23
It's possible, sure, but the results are going to be a bit hit or miss.
Posted by awambawamb on 2018-06-28 16:39:13
I volounteer for testing and bug-locator, for the next phases.
Posted by SkiJunkie on 2018-06-28 16:55:36
I'd humbly suggest that if you are writing new game logic, move it all to the server. Make the HTML 5 client just the glass pane used to display the current state of the game and accept input. Had I been able to continue with JavaBBowl I had planned to do this. When technology changes making your client obsolete, all you have to do is write a new light weight client without having to re-implement the game logic. Plus if you want native iOS, and Android, apple TV, car play, etc. clients, easy to do. Probably a car play client is a bad idea.... :)
Posted by Christer on 2018-06-28 17:13:37
Hello SkiJunkie, nice to see you're still around! :)

The current client is actually relatively close to having the model server-side. It is, however, a bad idea to have everything only on the server. For performance reasons, the client needs to be able to know what actions are available and what actions aren't. Things like the display of the movement paths when you mouse over the field, and the display of who can intercept a pass would feel incredibly slow and terrible if that had to involve a server request for each square you over over.

Even things like moving players on the setup should be disassociated from the server (which it is in FFB, but not 100% perfectly) so that the client can very quickly do these movements without having to wait for the server for each one.. Invalid moves should be rejected in an asynchronous message to the client so that it can be dealt with properly.