I’ve been playing tabletop miniature games since I was 12. My dad used to work in the centre of Edinburgh and when a GW store opened up there he took me and I was quickly hooked. WHFB was my initial love and I slowly acquired a large dwarf army (over 500 models, including a 150+ slayer army) and later a smaller Empire and wood elf force. I also got into 40K as well starting with Squats and then moving on to chaos and loyalist marines.

I didn’t really pay much attention to Blood Bowl until my friend got the 2nd edition boxed set. Our gaming group dabbled a bit, but didn’t really follow the rules completely, preferring to focus on the bloody carnage aspects of it. We tended to disregard the rules on picking teams, often making mixing the races but without the penalties. Chainsaws and other secret weapons were popular and we even made up rules for bikers! Dungeonbowl was a favourite as well, but again we spent more time trying to wipe each other out that score.

It wasn’t until 3rd edition came along with its far more streamlined ruleset that we really got into the game. Even then we still ended up mixing teams (more due to lack of figures than anything else) and would focus more on killing each other out than scoring lots.

When GW moved BB to the Journal, online and specialist publications I did retain an interest but found it confusing to work out which rulesets were “official” and most of my attention was devoted to 40K, WHFB and the LOTR game. I kept playing 40K and Fantasy, attending several tournaments including the first ever 40K GT in Nottingham. Points were awarded for army selection and painting and this helped encourage me to become a pretty accomplished painter and was soon winning several local painting competitions, including best painted army at some tournaments. I enjoyed this so much that I decided to study model making at university with the aim of it being my career.

I moved to Bristol in 2003 to work as a free-lance model-maker, I made a living for that for a few years before wanting something more stable but did keep an interest in it as a hobby.
I was a regular at gaming night in my local GW, whilst it was mostly 40K dominated with some WHFB and LOTR players, other GW games would come in and out of fashion. During 2006 one of those was Blood Bowl where an active league sprang up. The league ended up petering out all too quickly but someone did tell me that it was possible to play the game online. A quick search later and I came across Fumbbl, signing up for the site 10 years ago to this very day.

I was pretty cautious to begin with, slowly learning the client and lrb4 ruleset in the academy and league divisions via friendly matches. But once I got the hang of it I became active in the Ranked divison, averaging a game a day. Variety was always important to me and I loved playing with and against all 21 (this was before the site moved to crp) teams, so much so that I was the first coach here to complete the LRB4 grid.

Missing regular scheduled games I signed up for a couple of leagues and through them ended up being pointed at the WIL. I found this to be by far the most rewarding aspect of playing on this site. I’ve since played well over a 200 games there, first with my rather mediocre human team and later with a more successful undead team. What I liked most was being a member of the WIL community and started helping out with the admin side of the league. Beginning with assisting the compilation of stats, making images for the league, looking after a specific division for forfeits and eventually founding and running the WIL Fringe, our recruitment and feeder league.

It was through the WIL that I got back into painting Blood Bowl models, an offhand conversation in WIL chat with PeteW found me converting and painting up a dark elf team for him to use at the NAF GT. I started blogging about it which proved to be popular and later on other coaches asked me to do teams for them and I’ve now completed over 30, including the last 4 NAF GT prizes. This did reignite an interest in playing tabletop again and I attended a few Grand tournaments in Nottingham as well as both attending and helping out a little with the Star Bowl tournaments that PeteW ran. One of things I did to help out was design both normal and block dice to give away for both attending and as prizes in the tournament. I was especially pleased with how the block dice turned out.

Seeing as how I have spent so much time on this site I have donated money on occasion, sending the odd $20 here and there. When the Fummbl t-shirts were on sale I bought 1 and proudly wore it at a couple of the NAF tourneys.
In 2012 when Sundevil set up the Fumbbl dice Kickstarter, I contributed and bought 2 sets of them. I had always loved WhatBall’s designs but wasn’t 100% satisfied with the actual dice themselves. I prefer those with circular faces like the official block dice rather than square with rounded corners they came with. 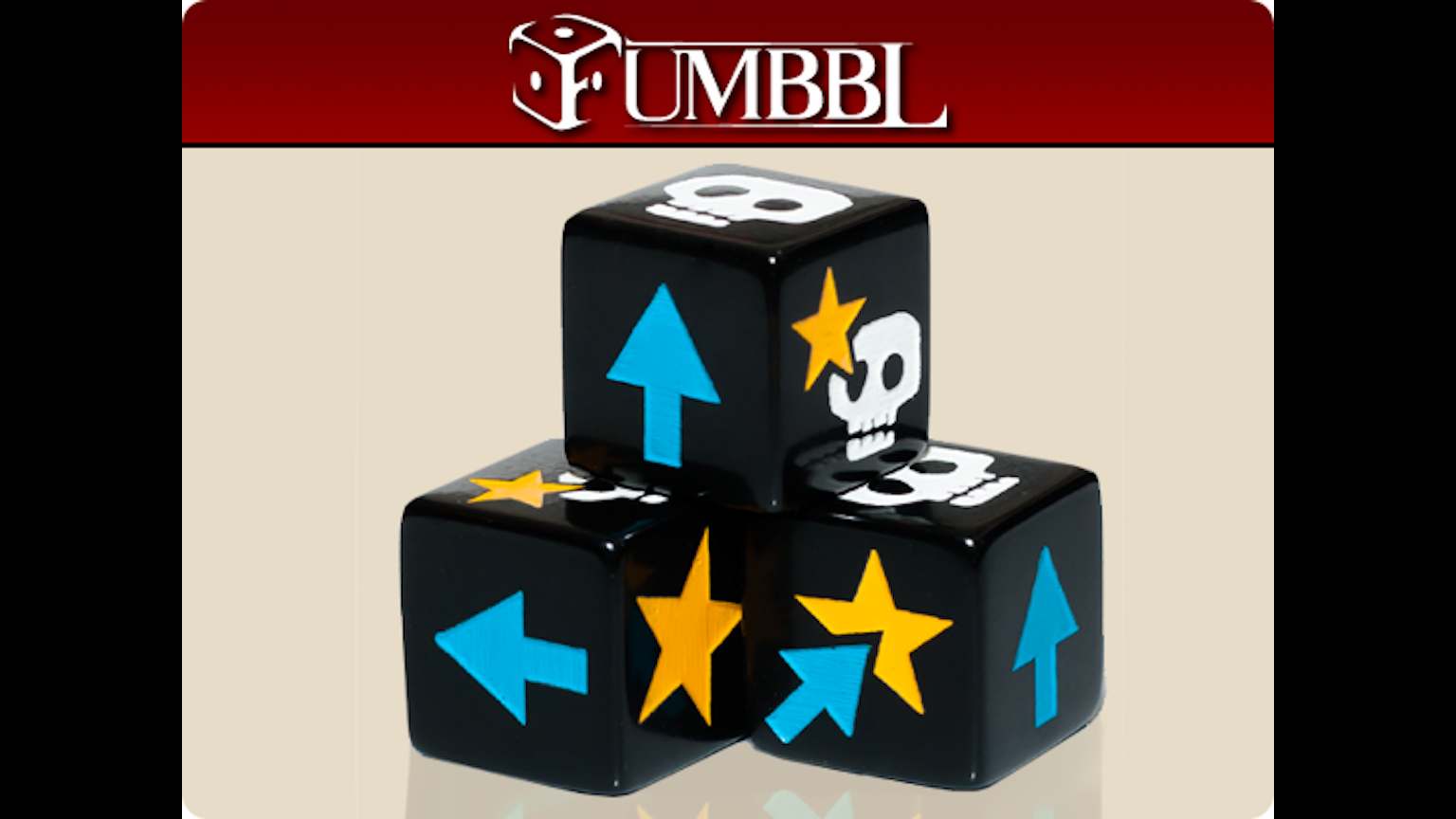 With my 10 year Fumbbl anniversary approaching I wanted to do something special to mark it. I contacted the same company I used for the Star Bowl dice to get myself a new set of the Fumbbl dice. The company could only do single colour inlays, but I was able to find a yellow paint that was a close match for the stars and mix my own blue to paint the arrows.

As you can see these dice are a very similar to the original ones, the designs are cut deeper into the plastic and had to be shrunk a little due to the smaller faces and this shows the slight difference in the colour of the blue arrows as I couldn’t get an exact match. I feel these changes are worth it with them being nearer in style to the classic GW block dice.

The company is able to do other colours aside from black and even make ones with a pearlescent finish, so I thought why limit myself? I decided to order some other colours of fumbbl dice on top of the classic opaque black. I also got; White Opaque, Black Pearlescent and Red Pearlescent.
I really like the pearl dice and was really disappointed that the company were out of stock of the white version as those looked awesome on the Star Bowl dice. The White Opaque dice necessitated a swap to black inlays and it that needed several white undercoats to get the blue arrows and yellow stars to look right.

All in all a pretty cool way to celebrate 10 years on this site and once I get the chance to play tabletop again I can show off my unique block dice with pride.

I might have gone slightly overboard with my order. So I could either bring the whole lot with me and toll a new dice every block or sell off the spares to recoup some of the costs.


This is all just a very roundabout way of announcing that a small batch of Fumbbl dice will be available for sale extremely soon. The aim is to give something back, you all get another chance to own a set of the cool Fumbbl dice, this time with extra colours and styles available. Plus it will raise some money for the site to say thank you to Christer for all his hard work over the years. More details will be appearing in the forum in the morning