Group managers: knine, tussock
Create team for this league
Season 2 is over.

League is in hibernation due to lack of interest in BB16.

Any team from any existing BB16 rules league can join, but it will be imported to this league's rule set (ruleset 6).

Old DAWGZ has only one special rule: We treat our oldest dawgz with respect. If your oldest player (by game #s, ties broken by spp, then TDs scored, then CAS inflicted) suffers a serious stat injury or death, you can elect to replace that injury with a niggle. You may use this special rule once per season. pm knine.

There are some links in the table below to the MAD DAWGZ league. Feel free to join!

The Old DAWGZ league will have a playoff to see which coach is the "Big Bad DAWG."

While we are growing, it is permissible to play in both conferences, BUT: 1. you cannot claim a forfeit if you didn't make yourself available for an evening game in the relevant conference timezone. and 2. If both your teams advance to the playoffs, your filler does not go to the playoffs. Instead, the next team down the ladder goes to the playoffs.

There is no re-buy between seasons. If we get big enough, we'll go to a premier conference style set-up where the top two teams move up and bottom two go down, in a 7 or 8 team conference set-up. 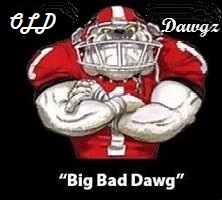 This league is for legacy BB16 teams. Any tv. New teams welcome.

There are two conferences: BullDAWGZ (North America) and Dingos (Oceania). It would be great to get some EU coaches for a third conference. We will adopt a premiership style conference set up if we have enough coaches.

Rules
1. 14 days to complete a round - dates will be posted on the tournament page.
2. Don't time out your opponent. Ever. Send complaints about slow play to the Commish. I'll then have a discussion with the slow coach.
3. The team with higher game TV readies first, ideally at least one day before the game.
4. MNG will be eliminated during the offseason. So if you get a MNG on a player at the very last game in the season, then ask group admin to remove it. Niggles get rolled between seasons as per BB16 rules.
5. Forfeits. Sometimes real life gets in the way. Unless it is clear that one coach made no effort to play the game, a forfeit will be zero points for each team. Note: missing an agreed game time without a good real life excuse = a loss. If it happens, pm knine with the story and the discussion thread between the coaches.

This group has run under different names in the past. Here are the winners:

The DAWGZ BB brand started in Oceania where team builder tournaments were run under the banner of DAWGZ Breakfast. Under DAWGZ was one of the tournament themes, and it branched out to gather in Legacy BB16 teams that were losing their leagues to BB20. It lasted one season. Now we are playing Old DAWGZ.