On now:
DIBBL Leeg Season 23 But these aren't the teams ;p

A quick fire stunty round robin competition. Made up of Goblins, Ogres, Halflings, Skinks (no Saurus), Underworld (no Rats)

The following rules are in place:
o A spiked ball is used for play. Any failed pickup or catch roll results in the player being stabbed.
o 50k inducements will be given to each team to purchase a Card
o Banned sneaky git players are sent to the KO box instead.
o Sneaky Git functions like Guard on foul assists.

Entry is open to any DIBBL team.

The following rules are in place:
o Maximum number of players on pitch for each team will be 8. Note: Rosters will still need the minimum 11 players.
o Teams must set up a minimum of 2 players on the line.
o Turns are limited to 2 minutes.
o Fouls will receive a +1 to break armour.

Congratulations to Dunenzed and Icepelt Hammerblow for taking out the first DIBBL Major trophy by beating Shteve0's Zug in the final. This was a 16 team, straight knockout tournament where each team had a unique Big Guy Star (any St5+ star player, or Puggy). Big Stars were surprisingly squishy.


Crap Bowl
This is DIBBL's oldest & most historic competition, but not the most prestigious by any means. Though it may be fair to say that no DiBBL events hold much prestige.

Notes:
1. Puggy is the only star player that may be induced, all other inducements are allowed.
2. A spiked ball shall be used.

Crap Bowl II will be played at some point in the future.
Lambhurly Shield 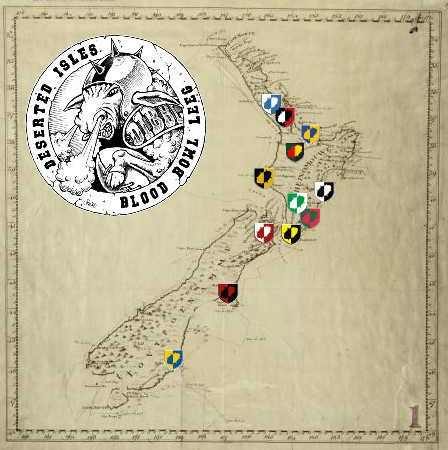 The Participation Plate Season #4 Journey from The West (Simyin, D_Arquebus)

Currently the two divisions are equivalent (i.e. not tiered). This means that new teams entering The Leeg will face some fairly developed teams. To make things a bit easier on the DIBBL virgins, teams are allowed to build to a maximum TW of 1500 (including treasury). Training games can be played against any [L]eague team, but you may not play against the same team twice.

The style of the Player Awards changes every season. Click HERE for the Bling for your team and player bios