One mojito, two mojitos - Look at those beautiful eyes!


An exotic shark of warmer waters, Sharkira is almost a hypnotic sight gliding gracefully through the seas before exploding out of the water to chomp with her beautiful pearly whites! 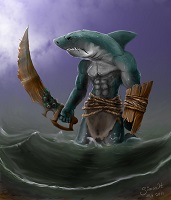 MA
4
ST
5
AG
2
AV
9
R
0
B
291
P
0
F
4
G
59
Cp
0
In
0
Cs
29
Td
0
Mvp
7
GPP
93
XPP
0
SPP
93
Injuries
Skills
Claw
Blood Lust
Frenzy
Guard
Mighty Blow
Block
Stand Firm
Break Tackle
Sharpnose is as close to a connoisseur as there can be among the Sons of Stromfels.
Named for his keen sense of smell, even among his kin, Sharpnose can smell blood and identify to what it belongs from over 30 leagues away.
He can often resist the need to just bite at what is directly in front of him and play the waiting game in order to ultimately take a bite out of the tastiest thing around.

Sharpnose was recognised as a Star of the CIBBL League at the conclusion of autumn of Year 5 when the Fins competed in the Silver division. 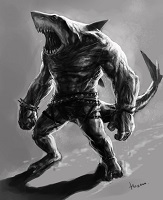 Keep away from him.

Despite suffering permanent injury to bitter rivals, the Black Flags, during the Autumn of Year 4, Blackfin has pushed on and was a major driving force behind the Fins’ Regional winning Year 5 Spring campaign, at the conclusion of which he chomped through two of the Flags’ players and was recognised as a Star of the CIBBL league.

Counter-intuitively, Blackfin has gone from strength to strength since picking up his injury and at the end of the Spring of Year 6 was recognized as one of the Super Stars of the CIBBL league.

Hooktooth is accountable for the sinking of hundreds of ships and the lives of thousands of sailors, as well as the lives of innumerable creatures of the sea.

Hooktooth’s visiage is scarred from all of the giant sea monster battles he has waged and won and, having overcome everything in the worlds oceans, Hooktooth is now coming on land …

Hooktooth achieved a Triple X in the match vs the Rotfall Ironworks Rocketeers during the autumn of Year 4. Tasty, tasty rats!

Hooktooth continued his up-tick in Chomping to be recognised as one of the Star Players of the CIBBL League at the conclusion of the Spring of Year 5 - the Fins’ first Regionals win.

Ronnie is a pirate through and through. Tough as old boots and with a smell to go with it. Ronnie wrestles with the sharks just for fun.

Pike Codswallap has served under Cap’n Finn Prawn-Cracker as Bosun on the Red Snapper for over 10 years.

More true a pirate than most of the rest of the crew, he is in it for the gold and a life of plundering.

Jaws had a strong debut against the Sartosa Black Flags as the absolute lynchpin for the sharks as they chomped on him over and over.
He then followed up that performance with some big time passes, touchdowns and MotM awards to the point where he attained the most SSP of any other player across the division (Spring, year 4).

Jaws hit the Wave Rider award in back-to-back Spring seasons and in Spring Year 5 (on the way to Fins’ first Regional Trophy), he received the award for Blocking thrower, triple.

The only real positive from the Fins’ truly dire run in the CIBBL Climax in the Summer of Year 5, at the end of the competition, Jaws was recognised as a Star of the league. 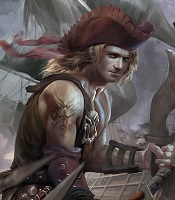 A crafty son-of-a-gun, Morin is adept at keeping out of trouble and you can usually find him skulking about at the extreme ends of the Blood Bowl pitch, as far from the action as he can get.

Morin had a blinder of a game against the Bear Clutchers in the Grand Cathayan Exotic Creature Challenge in the Summer of Year 3, hitting a completion, casualty and touchdown to pick up the Special Specimen award - Blocking thrower, triple.

Morin went on to pick up the Wave Rider award, during the Spring of Year 4 after hitting 3 completions in 4 matches - the most in the division.
What a guy.

Well past time, Morin was recognized as one of the Star players of CIBBL at the conclusion of the Spring of Year 6.

Trading one type of chomping for another, McNugget is hopeful his spicy chicken recipe will find more favour with Giant Shark monsters than it has done with vampires …

Walker came into his inheritance somewhat earlier than expected and, having always wanted a life on the seas, bought the finest pirate garb money could buy and then bought his way aboard the Red Snapper and onto the Fins' team.

He walks the walk and talks the talk and rumours continue to circulate about quite how he came into his inheritance so early on ... 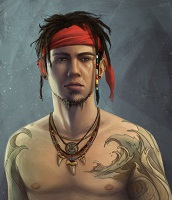 Even the Sons of Stromfels themselves do not go near him.

In the Summer of Year 4, Sharktooth averaged 1.8 fouls per game to claim the prestigious SCRIBBL Climax Outstanding Achievement award for most fouls committed!

Sharktooth put in a shift during the Fins’ first Regional win in the Spring of Year 5 and was rewarded for it at the end of the season when he was awarded the CIBBL Wave Rider award for most fouls.

Back-to-back Wave Rider awards for fouling saw Sharktooth pick up a second Wave Rider award as well as the Target Eliminated award during the Spring of Year 6 as he put the boot in time and time again, culminating in the death of Morag - an ogre of the Sartosa Rat-bags. Sweeeeeeeeeet. 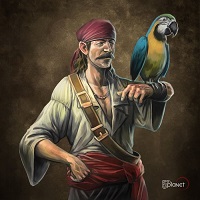 Whilst he is an avid Stromfels disciple, he also loves his crow’s nest as it keeps him as far away as possible from any raging teeth.

Morgan played a key role in the Fins' first Major trophy - the Copper division of autumn, Year 4, and was recognised as he was awarded the Copper Excellence award for Interceptions, all-rounder.

Morgan's contributions game after game were recognised at the end of the autumn of year 5 when the Fins competed in the Silver division and Morgan was awarded CIBBL Star status.

A castaway on a desert island, Jabberjaw was picked up by chance as the crew sailed by on the way to a match. They have come to wish they had just left him on the island.

Predictions are that, one way or another, Jabberjaw will not be long with the Fins …

What is for sure, though, is that the guy really does have a crackin' mullet!