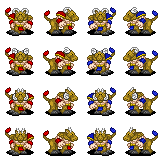 Background
The Centigors were once a proud warrior race formally Gors given a gift from their gods for their prowess in war. Fuelled by alcohol they were frenzied killing machines that would strike fear in to those that faced them on the battle field, but the world has changed so much since then.

After the great wars subsided the Centigors continued to drink… heavily. They became increasingly unreliable and untrustworthy resorting to petty crime to fuel their consumption. They became outcasts in the bray herds, forced to live among the lowly Ungors.

Over time this segregation led to Ungors and Centigors forming an allegiance or sorts, though neither trusted the other race in the slightest or even those of their own kind for that matter and inevitably in a world with only one way to redeem one’s self the Centigors and Ungors started playing Blood Bowl.

Ratioanle
Creating this team was pretty straight forward. I wanted this team to centre around the Centigors; because of their unusual fluff I felt it would be fun to have a herd of them on the pitch. I have basically given the Centigors the same stat line as the Bull Centaur, keeping sprint because of their 4 legs which means they can really move once they get going and adding Horns because the Torso is of a Beastman with horns. I also added Bone Head and removed Sure Feet because Centigors are basically all alcoholics and constantly in a drunken stupor, also prior to battle or in this case playing Blood Bowl they drink a great deal. So Bone Head represents their drunken state and Sure Feet seemed as it should be removed because they wouldn't be quite so sure footed as a Bull Centaur due to their drunken state. I did not give them M access because becoming a Centigor is in itself a mutation Gift of Chaos similar to Bull Centaurs of Chaos Dwarves, I have also kept to this philosophy throughout all the Chaotic teams.

Although normal Gors obviously fought along side the Centigors when The World was at war I felt they didn't have a place in this roster. I felt that Gors and especially Bestigors wouldn't be quite so keen to associate with Centigors in these times, Centigors are thieves and alcoholics while Beastmen are proud warriors. However I did feel Minotaurs still had a place as they are creatures of low intelligence and they are also mercenaries in the Blood Bowl world. Playing for teams that are willing to pay. Similarly I felt Ungors would also be happy to play along side the Centigors, as they are bitter jealous creatures that are pretty vile. They also live at the bottom of the Beastmen caste system so they do what they are told.

After all these considerations I found I was basically looking at an alternate Lizardmen team of sorts. 1 Big Guy - the Minotaur. 6 St4 players, though with a negatrait and Linemen that are St2. The Ungors were kept the same as in the normal Beastmen team, so over Lizardmen they have the advantage of having G access on their Linemen, though they are not Stunty and a little slower. Their Big Guy and Centigors all have Horns so the average St is technically higher and Sprint makes the Centigors a little faster too. The Centigors are also ag2 which makes them a lot more mobile than Sauri, though having a negatrait makes them a lot harder to control.

Finally the re-rolls are 70k because re-rolls represent a teams organization and training etc and a team full of drunks probably wouldn't play that well together.

Season 2 Changes
No changes made, the team was designed as a fun silly tier 2 to tier 3 team, as the team is based around drunk players. They played only 86 games which is too few to really say anything about them, with a win percentage of 37% which puts them at the very bottom of the tier 2 bracket. Though through play testing my self I do think they are slightly better than this win ratio would suggest, they are certainly a lot better than Ogres who are the most obvious comparison.

Season 3
No changes made and none will be made, the team is locked in. As expected the team contiues to perform fairly poorly. A win percetnage of 42% in a 116 games. Though the number of games played is pretty low I would still rate the team as a Tier 2 team as they feel much better than normal Ogres anecdotally.

Team design, Background and Rationale by Garion
Player Pics by Knut Rockie and coloured by Garion
Icons by Cowhead, Kingmad and Garion