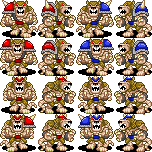 Famous Teams
There are no famous teams mentioned specifically by name but 'Clan Bowl' an article first published in Citadel Journal 46 and later in Blood bowl Annual 2002 contained rosters for all the alternate Skaven Clan teams in this League. Though the rosters here have been changed and improved in many ways.

Background
At one time the four great Skaven clans lived together in Skavenblight and their teams were among the greatest in Bloodbowl history. As the game changed Skaven stayed ever strong but Clan Moulders contribution to the team grew less and less important. Rat Ogres became quite the rarity on Skaven teams and Clan Moulder’s services were rarely called upon.

The great clan grew frustrated and left Skavenblight forming a stronghold known as Hell Pit, a place rich in Warpstone perfect for breeding and mutating their creations.

Soon after Hell Pit was founded Clan Moulder started breeding their own Bloodbowl teams ran by Packmasters - made up of Slaves, and the mighty Rat Ogres. But unlike normal Skaven teams Clan Moudler Teams were prone to mutating far more often and freely, using the power of the Warpstone to mould their players in to powerful killing machines.

Rationale
Clan Moulder is known for 3 things mainly, their use of slaves, their mutations/creations and most importantly the Rat Ogre. So choosing which players should be in their team was pretty straight forward.

First of all I put Rat Ogres in the team; this made the team fairly unique as there are no Wild Animal teams in the game. I gave them Mutation access on a normal roll because mutating is such an important part of Clan Moulders background and living in Hell Pit surrounded by the vast quantities of Warpstone would make any creature that could survive the noxious fumes mutate in weird in wonderful ways. The only difficulty came in choosing how many Rat Ogres to allow in the roster, I decided to just allow 6 to mirror the Ogre team in the end.

The Slaves were very straight forward, they start with the same Ma as normal Skaven Linemen, though they are weaker and less well armoured, I elected to make them Stunty players because of their size first and foremost and also to add mobility to this team. As they are Stunty players Dodge was a must to give them some chance of survival when getting blocked.

Season 2 Changes
Clan Moulder played 460 games which surprisingly made them one of the most played races in year 1, they had a win percentage of 41.9% which is a tier 2 team as expected. They were also the second most brutal team in the game, causing more cas per game than any other race apart form Daemons of Khorne. As such I felt this roster was fine, and working as it should, no change required. I considered having the pack masters in the team at one point, but decided to keep the team big guy and Stunty and the Packmasters as coaches as they detract from the Stunty and Big Guy fun when on the pitch..

Season 3
541 games played, so still one of the most popular races, likely because behind the two khorne teams they do the most damage out of any teams in the game. Their win percentage is 41.31% which makes the team tier 2. As expected. No change needed. Team locked.