Back to One Turn Guide

(* This is for Dark Elfs (with 2 Witch Elfs), Dwarfs (with 2 Troll Slayers), Necromantic (with 2 Werewolves), and Norse (with any 2 of Blitzers, Werewolf or Yhetee), but any team with 2 players with Frenzy (and MA 6+) can do this.

The diagrams below were done for Dark Elfs, so WE = Witch Elf = Frenzy player. Adapt to fit your team roster.)

1) Blitz with the free Frenzy for Blocks #1 & 2, push the ball carrier twice, then dodge back out and move to a position just behind the central defender. 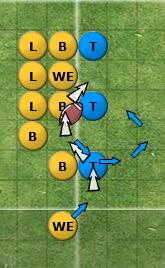 2) Block #3 with the lower corner and push the other Frenzy and follow up.

3) Block #4 to push target into the ball carrier and follow up. 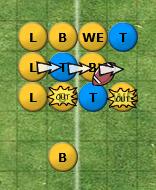 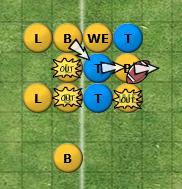 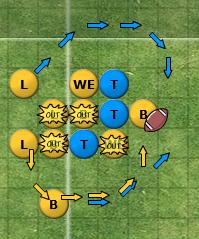 6) Block with the 2nd Frenzy player for Blocks #6 & 7, take a Pow on the last Block if available, push the ball carrier into the space shown.. 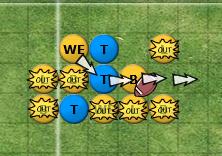 7) Run in to the end zone for the score.

i) If you have Ma7 or higher, you can fail to roll Push (or stop trying) earlier, or continue and have fewer GFI's.

ii) For MA 6 you do 7 blocks (6 rolls must be a push back) plus 1 Dodge (to reposition your first Frenzy player).
(Because the blocks must result in a Push, skills like Block, Wrestle, Tackle or Mighty Blow give no advantage in succeeding in the OTS, only in knocking the target down if it's not a Push.)
(If you have one Frenzier with skills (like Mighty Blow, Tackle, Wrestle, etc.), make that Frenzy #2, so they can make the most of a Pow on the very last block.).

iv) If there are 2 squares between each defensive LOS player, this setup becomes more difficult. The main difference is in Step 1, when you push the ball carrier, you chain-push the central defender to where the "top" defender is located in these diagrams, but then are missing the "middle" defender to help force the chain-push for Block #2 (the defender that starts in front of the ball carrier as seen in Diagram #1).

So against a 3-wide set-up you need either...