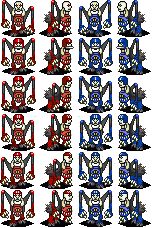 Background
Throughout The World the power of Chaos grew. First warriors of Chaos formed teams aligned to their gods, next Daemons of Chaos were sent forth and the stranglehold the 4 Gods of Chaos had over the game became immeasurable. But as they grew in strength so did another power, a power in The Warp that was long forgotten… Malal had returned.

The Renegade God's followers started appearing throughout The World once more. They came bearing the symbol of Malal; a skull, half black, half white. Marauders and Warriors started defecting from their Chaos gods, pledging allegiance to Malal. The God of Malice had never had such power, his influence and control cast wide throughout The World, his fate and strength tied to the 4 Gods of Chaos

As Malal’s power grew he sent forth his Greater Daemons and it did not take long before Bloodbowl teams devoted to Malal made their presence know. They cared not for winning or losing. Their sole purpose - to destroy all followers of Chaos and reap their souls for Malal.

Rationale
Malal is the 5th Chaos God. He appeared in Warhammer Fantasy Battle back in 2nd edition though received a couple of mentions in 3rd that somehow escaped the editing process when he/she was removed.

Malal is the god of malevolence described as a renegade chaos god dedicated to the destruction of other chaos gods and their followers. In the sparse material that exists about Malal I also read somewhere that his power is tied to the other gods of chaos and as their power increases so does Malals.

The drone was based on a spawn of chaos drawn for the realms of chaos book, that never made it in, most likely because almost all references to Malal were removed. Like everything Malal/Daemon related he is insectoid in appearance and has an external skull. I called him Drone though there was no official name given for him. My reason for this is there is a fair bit of evidence in the interviews linked at the bottom of this page that Malal worked like a hive mind, that these creatures moved around all under Malal's influence. That once Malal had collected a soul they would belong to the god and work under his command. Drone also fits with the insect theme and from the creatures appearance it looks like it is a grunt in Malal's collective.

The Drone's stat line was based on the art work. He has 2 heads because the art work shows he 2, possibly 3 heads as it looks as though there may be a 3rd on the creatures posterior. Big Hand was given, because the creatures arms are very long and hands are huge. Thick Skull was added as this creature like all Malal creations is built to take on Chaos, plus they all have exoskeletons on their head. After this I was a little unsure what stat line to give it, in the end I went with 5 3 3 7, they are quite bulky so don't look fast, though they have 2 heads and flea like limbs, plus move around on all fours, two heads gives them some increased mobility and fits fluff wise. FA and Thick Skull gives them some resilience as they don't wear much if any armour an just rely on their exoskeleton skull and disgusting appearance to protect them, finally regenerate was added as they are a Daemon.

The Lesser Daemon and Greater Daemon of Malal were based on this artwork which leaked out a number of years after GW had done away with Malal. The lesser daemon is meant to be a head taller than a man with two blades for reaping souls which is also a theme that runs through the little evidence in existence about Malal. so this was represented with Claw. They also gained the Negatrait No Hands because they don’t have hands, Foul Appearance because of the way they look and for its defensive properties and of course Thick Skull because they are aligned to Malal and have their skull on the outside. Again the Lesser Daemons never had a name so I created one, I have heard them referred to as Hook Horrors before, but I didn't like this. Firstly Horrors are specific to Tzeentch. Also it didn't really fit with the theme of reaping souls, in the end I went with Soul Reavers as it sounds cool in my opinion and depicts their role in Malal's pantheon.

The Greater Daemon was built in the same way. I didn't want it to be as powerful as any of the other Greater Daemons so it is essentially just a Kroxigor with Horns and Foul Appearance. The skills were all based on the image and information in the link above, there is also further information about Malal here and here and here. Again this greater daemon didn't have an official name so I chose this, I went with the naming conventions GW used for their greater daemons, basically a long winded name that explains what they embody. Harvester of Souls fits here thematically and in the same style as the other greater daemons.

Season 2 Changes
No change needed, only 150 games played with this race which is too small to make any judgements really, but anecdotally there is nothing wrong with the team. They are functioning as expected. Their win percentage is currently at 45%.

Team design by Garion
Background and rationale by Garion
Icons by Cowhead and Fanky
Player Pics by Knut Rockie, coloured by Garion