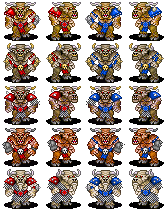 Background
Minotaur teams, like Beastmen teams are nomadic, they have no home stadiums, they prowl the World in Bray herds searching for opponents brave enough to meet them on the Blood Bowl pitch. They do not play for trophies or for the fans, they play purely for the love of the hunt, to satiate their thirst for blood and battle.

Rationale
Adding a Minotaur themed team to Secret League has been a long time coming. Up until now (year 4) I and others felt they were just a worse version of Clan Moulder so there was little point in adding them to the huge list of rosters. Ultimately I decided to add them for completeness sake. But in doing so and in discussion with Kingmad we stumbled across an idea that would make the team feel a little more unique - adding an Exalted Minotaur to the roster.

First though was choosing the linemen, this was an easy decision to make as the lowly Bray are not represented in Secret League so far. They are runts of Beastmen tribes, even the lowly Ungors look down on them. They, like Ungors do not have Horns for attacking with (part of the reason they are held in such distain by Beastmen) and they are weaker, smaller and all round worse than Ungors. So 6236 felt an appropriate state line, slower than Ungors and with 1 less point of Av. They also only have access to A skills, again losing G access over the Ungors shows that they are not as skilled in blocking etc... Stunty was added because of their size and again to make them weaker, more feeble than Ungors.

Minotaurs take up the usual 0-6 slot for Big Guys. Though in the end I decided to follow the precident set by the new Ogre roster and change this to 0-5, as the 0-1 positional makes the slot 0-6 Minotaurs in total, one of them is just special. M access would only be available on doubles so there is consistency between Beastmen, Centigors and now Minotaur teams, and also because like Beastmen teams this is a nomadic team, not living in the chaos wastes, thus their chances of freak mutations are much less and instead must rely on gifts from their gods instead. It also helps separate them from Moulder teams a bit more as the focus of this team is less about mutations en masse and little more about defence.

Finally we added the Exalted Minotaur, at this point I decided to change their naming conventions in line with what Beastmen and Minotaurs refer to themselves. So Minotaurs became Bullgors, and Exalted Minotaur because Doombulls. The name change added more flavour to the roster and also clarifies they are based more off of the Beastmen lore. Exalted Minotaurs or Doombulls get Mutation rolls on a single because they are the greatest of the Minotaurs, and have caught the eye of their chaos god. I did consider giving the team different Minotaurs or Exalted Minotaurs each based on a god, so the roster would have 0-1 Tzaanbull, 0-1 Bloodbull and so on, but this felt too forced, instead having 1 Exalted Minotaur that was left open for the coach to develop how they wish felt more interesting. If a coach wants to make the team with a Khorne flavour they can add more bash skills to the Exhalted Minotaur, if they go Slaanesh then adding Prehensile Tail or even extra arms to make him a ball carrier. Tentacles Nurgle and so on... Finally we decided to remove Wild Animal from the Doombull to represent that they are the greatest of their species, rare and powerful Minotaurs. At first this seemed potentially a risky move especially when coupled with 6 Minotaurs that never lose tackle zones but after some consideration it didn't seem like much of an issue, when coaching the team you would likely use your Bullgors to blitz so they can move on a 2+ and as the Doombull gets to move freely they would potentially function better as positional players, like moving a St5 Tentacles in to an advantageous position or even using the Doombull as ball carrier on offence.

Season 4 Changes
Minotaurs have been performing exactly as expected, a win percetange of 41.73% and one of the best performing bash teams in the game, up there with Khorne, Daemons of Khorne and Clan Moulder. However a change was still needed, the Doombull without any negatrait made them the best big guy in the game, and while they should definitely be the very strong and certainly the best Minotaur variant it just didn't feel right. So for verisimilitude they were given an Av buff to Av9, Bone Head (the least negative of all negatraits) and a 10k discount. This means they are still the most important players in the team, a little more survivavble, but not so reliable now.

Team design by Garion and Kingmad
Background and Rationale by Garion
Icons by Weresquig, Fanky and Kingmad
Player art and colouring by Knut Rookie and Garion