Allies: Human, Dwarf, High Elf, Amazon, Norse, Hafling.
During roster creation you may spend up to 500K on players from the Allied Teams listed above. No duplicate players types may be bought (e,g, you cannot have more than 1 Dwarf Blocker, or High Elf blitzer etc..). The players you pick from this list get the nega-trait Animosity in addition to their normal skills. Halfling Treemen used in this roster also gain the Loner nega-trait.

Once the roster is created and plays its first game, you're roster is then locked in and follows the normal rules of the game. You cannot add more allies to your team, you can only re-hire like for like replacements, in the event of injuries for example. 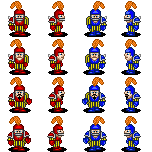 Background
Tilea is a peninsula bordering Bretonnia, Estalia and The Empire, there is no monarch or central government dictating the laws of this region, the area is divided up in to principalities and republics each with their own rule and their own problems. There has never been a regular military regime in Tilea, instead each city state employs professional soldiers from various races around The World..

Tilea's approach to Bloodbowl was much the same as their approach to war, they pay for hired help. The Linemen in the team are the only true Tileans and they really only play to make up the numbers and to keep costs down. Tilean teams only ever used to play Bloodbowl locally, each principality or republic would have a number of teams that would play against each other and teams from the neighbouring principalities. The teams were owned by rich land owners and trade fleet owners, and early competitions were all won by the richest team at that time, because of this interest in the sport dwindled so the leaders of each principality decided to impose sanctions on their teams which meant that they could only spend up to 500,000 on mercenaries. These sanctions became part of tradition and Tilean teams still stick to them today.

Tilean teams are now found competing all over the world. Constantly on the look out for new mercenaries they can use in the future, to give them the edge over their rival Tilean teams.

Rationale
The Tilean roster design was originally conceived in mbbl by Plasmoid and has already undergone some play testing. The idea of the team was mainly based on the Dogs of War army book from 5th edition Warhammer, and drew on Warhammer Tilean fluff.

It was an obvious choice to create a good guy Pact team allowing coaches to choose players from some of the 'good' races in the game. The races selected were all in line with the races available for use in Dogs of War armies, the only difficulty was trying to maintain some balance while allowing buying players to work in a way that feels like hiring mercenaries. To do this a 500k cap was put on the mercs and a limit of 1 player for each position. This was to stop teams overloading on High Elf Catchers or any other positional.

In testing the team has performed reasonably well at a low to mid TV, performing slightly better than Chaos Pact. However with further testing we expect this team will not perform as well as Chaos Pact in high TV league play, because their Linemen are so much better.

Finally came selecting the starting stats for the Tilean lineman. We wanted the Av of the lineman to be Av7 again fearing the roster could be too good with a higher Av lineman, but also for fluff reasons, as the linemens uniform was largely decorative; based on renaissance Italy.

Because of the unique way the roster is created, it can break some of the basic rules of roster creation, much in the same way as Chaos Pact, for this reason they had to be 70k.

Season 2
420 games played with a win percentage of 60%. This is a little too high for comfort. However Tilea have an inflated win percentage as people are not sticking to the creation rules. They are hiring too many players when the maximum is 500k in your team. No leagues or tournaments have seen any successful Tilea teams so far and no body has expressed any concerns with this roster to date. The only change made was to reduce the Humans Catcher by 10k in line with the 2016 edition changes. No further change required.

Seasons 3
654 games played with a win percentage of 54% puts the team as expected in tier 1. It's still hard to make any real assessments using stats on this team due to people not sticking to the creation rules, though this has gotten a lot better as people have got more familiar with the rosters. In scheduled leagues there are no problem with the roster either.
Team design by Plasmoid with minor changes by Garion
Fluff and Rationale by Garion
Player art by Knut_Rockie, coloured by Garion