Hello, it's GLN's roving reporter Herald O. Riviera here, bringing you the first in a series of interviews with the real people behind Blood Bowl - the officials. Through these cosy little chats you will learn more about the tireless workers and humble peons who do all the little jobs in the change rooms, on the training tracks and in the brothels after the games that go unnoticed in the match reports, but make the players' lives a lot easier. 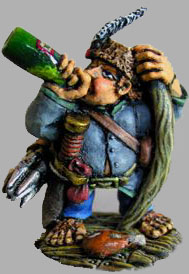 First in our interview series is Halfmoon "Moonshine" Proudfoot, the plucky little halfling bootstudder. He has been the property steward for countless teams over the years, and been sacked by as many for various rumored indiscretions involving his procurement of illicit substances and weapons for his players. His passion for Blood Bowl is surpassed in legend only by his lust for food. Loved by players and fans, hated by referees, he is known simply as: Moonshine.

GLN: Mr Proudfoot, welcome to GLN, it's a pleasure to finally meet you.

HP: (seems distracted) Fine, fine, hello. I was told there would be dumplings and apple crumbles at this interview?

GLN: Erm? yes. (signals frantically at buxom young female assistant) We'll have those for you presently. Now the first question I want to ask you is... why do they call you Moonshine?

HP: I prefer to think it's because of my romantic nature, but I know it's due to those terrible stories about me in the gutter press concerning certain events in matches for which I claim no responsibility whatsoever. Ah, here's the grub, and a pretty wench to boot! (He winks at the assistant and tucks into a huge plate of dumplings which she has just put on the table in front of him.)

GLN: You're talking about the matches involving goblin teams?

HP: Yes, I have a long association with goblin teams, such as the Grotty Little Wankers and Chemical Reaction. I would like to state for the record - mmph, that's a nice dumpling - that I have never been caught smuggling any kind of secret weapons or illegal drugs into any stadium in my career.

GLN: So have you actually done anything illegal?

GLN: Why do you think people accuse you of doing such terrible things?

HP: Mostly, it's jealousy of the achievements of the teams I am associated with, Herald. They look at the record of the Wankers or some of the players at Chemical Reaction and think they must be doped up on drugs or have daggers hidden about their persons to have achieved all that they have.

GLN: Can you categorically say that you have not provided any unfair advantages to players from these teams?

HP: I must compliment your lovely assistant on a particularly nice set of dumplings.

GLN: ... OK then. Tell me about some of the players you've had on your massage table.

HP: Well, there was that one little blonde girl... Oh, you mean Blood Bowl players! Right! Well, of course there was Enjoyment, Nuffle bless 'is departed soul. Actually, he were a right bugger in the changing rooms, always wanting this and that. "Moonshine, get me a drink," he'd say. "Moonshine, get me a towel," he'd holler. "Moonshine, bandage my broken leg!" I mean really, it was all me me me with him.

GLN: Who else then?

HP: Well, I once did some work for the Terrifying Anarchists of Naggaroth, in particular greasing up the arm of their star thrower Alexander Lurkman, who is the all-time passing champion of FUMBBL. Boy, what a prima donna! He had six beautiful elf maidens around him at all times meeting his every need, and when I say every need, I mean...

GLN: Yes Mr Proudfoot, I'm sure we know what you mean. I believe you also worked for Deathgerbils Revenge.

HP: Yes, although I lived to regret it. I still have nightmares about that nasty minotaur Pikachu asking me to oil his horn.

GLN: Eww. So did you ever do any work for any of your fellow halflings?

HP: Well, I'm a bit embarrassed about that. I was contracted to provide some assistance for the Midgical Mastery Tour once, but as we were preparing I got to talking with their chef about mead recipes, and one thing led to another, and the morning after the game I woke up in the gutter outside the stadium wearing nothing but a chef's apron and a tattoo on my left buttock which said GIL WOZ ERE.

GLN: Hmmm. On that slightly distasteful note, we had better finish up. Have you any message for our loyal Blood Bowl fans out there?

HP: Sure. Remember kids, pitch invasions are dangerous for young uns, so wait until your dad has stomped that nasty wardancer into the ground before you run on the field to kick him in the goolies.

GLN: Be with us next week when we interview another quiet achiever of Blood Bowl. Herald O. Riviera reporting for GLN.