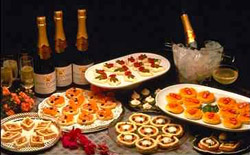 The Recipe for Fling Success
by Freak In A Frock

Many coaches scoff at us: the few, the insane, the coaches of stunty teams in Open division. They believe our teams are an easy bash. Well i just scoff - scoff cakes, pies, you name it! The Rumbling Tums always prepare the post-game feast before the match, and since there are normally fewer players around at the end of the match to eat it, the lucky living halflings get to eat their fallen comrade's share. After the famous Tummleton incident i have banned players eating before all the others arrive. He used to sneak off the pitch the first turn every game, apparently badly hurt. We soon became suspicious, and our suspicions were confirmed - he was faking it to get to the cookies first!

It is amazing what some halflings will do to get out of playing as much of the game as possible. I have had more than one player try to hide in the forest with Lightning Roots. He normally tosses them back onto the pitch. If they are lucky they even land on their feet! For halflings, a match seems to be a race to get a niggling injury. A niggled player can sit out of the game and still get their share of the food. I do insist that they still turn up, as I don't want anymore villages running out of food as the Tums tour through.

Despite halflings' lowly stature, coaches still use underhanded tactics to try and win. On one occasion the opposing coach spread the rumour that free cookies were being handed out in the KO section of the dugout. Well before you could say "Oi me 'ead", eight of the little buggers had come off the pitch "KOd" to check it out. Needless to say the other team scored, at which point they all vacated the room, complaining loudly about how the coach of Khorne's Army of Destruction had lied to them about the cookies.

Stunty players in Blood Bowl teams whose coach reads from the Throw Team Mate playbook (called How To Fling Friends And Injure People) normally live in fear of being eaten by the really hungry big guy on their team, but halflings are different. Some of the more dim-witted ogres who have been hired to play on halfling teams have witnessed so many herculean feats of gastronomic indulgence by their miniscule team-mates that they can hardly sleep before game days, paralysed with the thought that their little colleagues might develop the munchies before the game and see their ogre pal as a nice late snack with a bottle of chianti. For this reason, it is rumoured that ogres on 'fling teams will soon leave their positions forever, glad to be rid of the horrifying thought of ending up in some halfling chef's cauldron as an hors d'oeuvre.

Many people say that the Rumbling Tums are a one man team, and I say poppycock, i would never call Lightning Roots one man. There is an ongoing debate as to whether treeman are worth the effort, but the sheer terror that ol' Roots causes when he finally decides to get on the pitch is worth the admission fee alone. Causing over one hundred and twenty casualties, all with good old fashioned punching, and none of that laying on people malarky, he really is a force of nature.

It's not all doom and gloom though. More and more fans are attracted to our unique style and half time snacks. As my brave halflings stroll onto the pitch you can see the fans' chests swell with pride in the stands as the famous Rumbling Tums anthem rings out around the stadium, just before the other team rips them all apart.

"They're Small, They're Round
You can Bounce Them on the Ground