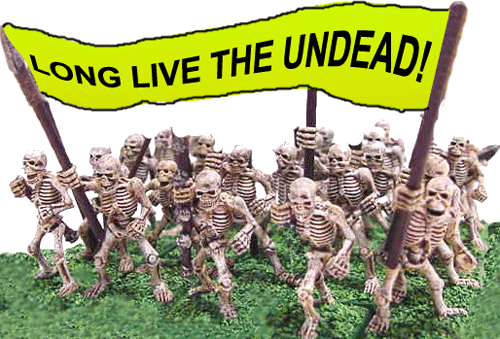 The Achiness of Death
by Candlejack

About two months ago, lots of rumours and suspicions roamed amongst all of the FUMBBLers. We all were wondering what this year's rules review might come up with. Many things were on the BBRC's to-do list - such as making experimental teams official, change skills and clarify rules. The aspect I want to focus on in this article (as most of you might have expected) was the announced changing or removing of the veteran Undead roster.

First Glimpse of a Change

Like every year, people were speculating about the upcoming rules changes in the forefront of the annual rules review. Jervis Johnson announced that he wanted the old Undead roster to be replaced by three new teams he made up: Necromantic, Khemri and Vampire. I'm sure he got asked a billion times why he wanted the Undead to vanish from the official Blood Bowl rules. In BBMag #9 he stated that he doesn't appreciate their background and that they have a lack of fluff, which is an important part of the whole Blood Bowl thingy. And, in his opinion, the new teams would be able to give this "fluff" that the old Undead were never able to achive. As you might remember, I did an article for the first issue of GLN summarizing all this. To my surprise, I got a lot of feedback on this article from people who were upset by these prospects. It seemed to me that i had alerted the community. All these voices rising and demanding the Undead to stay gave me hope that the BBRC might think the same, and I began to look forward to the end of the review.

Expect the Worst - Get the Worse

Time passed, days became weeks, weeks became months, hope became doubt, doubt became fear... but finally the results got published and we gained sweet certanity in the end. The Undead stayed, for god's sake, they stayed! But at what price? Two wights removed from their positions. I watched the channels to see people's first reactions on the changes. Most considered the strip down of the Undead being a big mistake, since wights are the core players in most Undead teams due to their agility and endurance. Coaches who were playing Undead for several years, like myself, remembered this configuration from the 3rd Edition rules, so its drawbacks and capabilities are well known amongst Blood Bowlers. But was that a wise decision? Was it a good idea to weaken the Undead? Some voices say so, pretending that this was a balanced configuration for Undead teams. Others demand to give the wights access to strength skills in exchange for this reduction, but this won't happen, at least not before the next review. The third party just bitches about the BBRC and considers Undead now as unplayable.

Noone can predict all consequences of this change on the Undead teams on FUMBBL, but I want to write down some assumptions here. With only two wights, coaches won't be able to build such front loaded starting teams as they could before, reducing the power of Undead in short running TR100-tournies. Therefore, they must rethink their tactic for those teams towards a less block-intensive playstyle. This might be more interesting in the low TR range, but when these teams breach the TR200 mark they will soon suffer from the lack of skilled and agile players. At this point, I can understand why people are demanding strength skills for wights. This would help the team to endure in the high TR ranges but won't be such a big help for the starting teams. I'm sure that many of you might disagree on some or even all of my points, but only time will show if I was right or wrong.