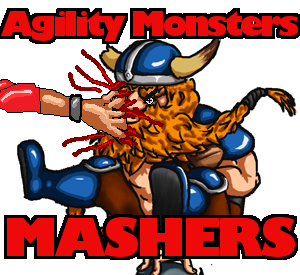 Group managers: Rabe
Hate the dwelfballing Agility Monsters? Join this group!
(If your goals are less sinister, you might consider joining the Agility Monsters Fan Group!)

You want to play against the Monsters with the goal to harm them or humiliate them in any other way? Join with any team from the Ranked Division you'd like to face the Monsters on the pitch with!

You deeply hate the team and have no desire or (currently) no team to play against them? Join with a team from the League, Blackbox or Stunty Division!

Any team in this group will be considered a potential opponent and might be contacted by the Agility Monsters' management to arrange a game at least once.

If your hatred is directed towards dwarves in general, you might also be interested in the recently formed Anti-Dwarf Association.

(Disclaimer: Any team and coach may be member of both groups without being diagnosed schizophrenic. Logo shamelessly stolen from the Agility Monster Mashers.)