Group managers: Rabe, FRSHMN, Kondor
To discuss the rules and show your interest in this project, please visit the forum thread!


This is the Hive Mind. It's the collective consciousness that controls every single Borg drone and seeks perfection based on the knowledge it extracts from the Borg's captives.

Any time a Blood Bowl player gets assimilated (to others it seems to look like he has been killed), his or her useful skills will be added to the following list (other skills are recorded at the bottom).

If a player of yours improves and rolls normal, simply pick the first skill from the top of the list that he/she can learn. Example: A Dark Elf Renegade and a Marauder would both learn Block on a normal first skill roll. Second normal skill would be Dodge for the Renegade and Thick Skull for the Marauder.

If your player rolls a double, he/she has to take the first skill from the top of the list that he/she can only learn on doubles. Example: Your previously mentioned Dark Elf would have to learn Thick Skull, while your Marauder had to choose Dodge.


If your player rolls a stat increase, it has to be taken as by the rules (see rules section).


In addition, the use of Dirty Tricks is recorded by the Hive Mind. Once all Dirty Tricks are known, Borg can start using them.


Other skills and characteristics encountered:

All teams have to be named exactly after this scheme:
[Division or league] Invasion Cube [serial number]

For the serial number, simply enter 001, 002 etc. until you have found the next number that is available. Note: If you're unsure about the team name, contact Rabe. Incorrectly named teams won't be accepted into the group! 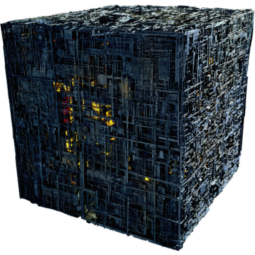 Your starting roster must include:
12 Marauders
5 Re-Rolls
1 Apothecary
0 Fan Factor

Cheerleaders and Assistant Coaches may never be hired.
Renegades and Big Guys can only be acquired through assimilation (see below).

Players are simply named "[player number] of [intended maximum team size]", for example "Three of Sixteen" (if you want to have the option of a full roster) or "Eight of Thirteen" (if you're sure you'll never go beyond 13 players).

There is no competition among Borg. Hence, encounters between Cubes should be avoided, if possible.

Any opposing player that "dies" through a block or foul action will not be killed but assimilated. His skills are transferred into the Hive Mind. His body is transferred into the Cube Depot and can immediately or later be used as team member, if compatible (see below).
Clarification: Each team has its own, exclusive Cube Depot, but all teams have access to the Hive Mind!

Marauders can be purchased any time. If the Cube Depot can provide a suitable body, it should be used.

Ogres, Minotaurs, Trolls, Dark Elves, Skaven and Goblins can only be purchased if a suitable body is in the Cube Depot or another team is willing to give away one from its stock:

Skaven Renegade - all Skaven that start with ST 2-3


The following players cannot be turned into Marauders:

Dwarves', Chaos Dwarves' (but not Hobgoblins') and Vampires' (but not Thralls') willpower is too strong to overcome permanently, so they would never become reliable drones.

Halflings and Snotlings are too weak, their bodies get destroyed during the assimilation process.

Bull Centaurs, Orcs, Treemen, Beasts of Nurgle, Werewolves and all Lizardmen including Slann have a physiology incompatible to Borg technology.

All undead creatures (except for Vampires - see above - and Ghouls - who are not dead) and Flesh Golems are fueled by magic and are therefor not compatible.

Star Players cannot be turned into Drones (but their skills still get added to the Hive Mind like the ones of all the incompatible players mentioned before).

If a Cube encounters a new species (i.e. custom roster, Stunty Leeg), report and stand by for Hive Mind analysis (decision made by Rabe).


If a body from a Cube Depot is used, a link to the original player has to be put into the new player's biography.

The Hive Mind records all skills an assimilated player had. It then ranks them by the number of times they have been recorded, the date of assimilation (new entries before old entries) and (as tiebreaker) the order in which they appear on the player in question (from the beginning to the end).
To represent this, this page will always provide a list with all those skills, sorted by commonness (see "Hive Mind").

If a player improves, his development is determined by the roll and the lists:

On a normal roll, he/she has to learn the first skill from the top of the list that is available to him/her.

On a double, he/she has to learn the first skill from the top of the list that is available to him/her on doubles only. If no such skill is available, the roll is treated like a normal roll.

The skills Leader and Pro can never be learned.
The skills Disturbing Presence, Thick Skull, Foul Appearance and Stand Firm represent typical Borg characteristics and are therefor on the list right from the start.

Players may only be retired if they suffer from at least one lasting injury (stat decrease or niggling injury).

Borg teams may only buy the following inducements:

Stars, Mercenaries and Magic Item cards are not permitted.

The following events have to be reported in the according forum thread as soon as possible:

Any Dirty Tricks card that has been used by an opponent for the first time.

Any transfer of a body from one Borg team to another.
Reporting successful assimilations is mandatory, as stated in the rules.

Beyond that, there are multiple ways to contribute to the collective:

The Borg collective has successfully assimilated the following subjects: