The first INSANELY CUP tournament started 01 May and ends 30 June 2021. If you want to join, it's not too late (I've got filler teams, just for you). pm knine to get in on the action. 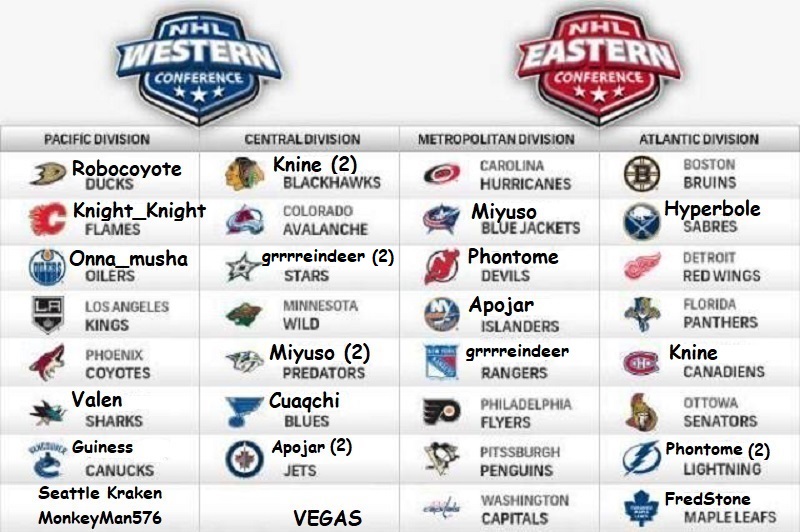 Re the inaugural season: You have til midnight 30 June to play all your games. Some rules: 1. The rules are as posted below. If you don't like a rule, post the proposed change in the "proposed-rule-changes" folder on discord and @Knine [k9kay9] [UTC+10]#2541 me when doing so. 2. If you get into a dispute during a game, then either agree on how to move forward or stop the game and pm me for a ruling. 3. If you can't get an opponent to play, send a pm to that coach on fumbbl and include me in the pm. It's unlikely that I'll hand out any forfeit wins, but if someone is totally non-responsive and the game matters to standings, then I'll endeavour to make a 'fair' call. 4. Remember: During the season, you CANNOT hire and fire players as you wish because they are all 'on contracts.' Read the rules on this below. 5. HAVE FUN - it's a game! (the best game on this planet - hockey!!!)


Team allocation: You can have two teams - a primary and a secondary, but they can't be in the same conference. Your secondary team is marked with "(2)" - these franchises are available to new coaches joining the league. Already taken are as per the chart above.


Given that passing is integral to ice hockey, all forwards and defence come with Pass, Accurate, Hail Mary Pass, Catch, Diving Catch, and Dump-off.

Goalies get Guard, Catch, Diving Catch, Diving Tackle, Nerves of Steel, Big Hand and Pass Block. They have all these skills to make them hard to get around and to score on - as in real hockey. All these skills can be used at anytime, even if it takes the goalie out of the crease (but no more than four squares - exceptions below). For example, a goalie can use diving tackle, even if he would then end up outside the crease.

Only six players on the pitch for the face-off. One of them is the goalie and he must stay on the goal line (in front or behind it) at all times, except as noted below.

Given that it would be interference to hit anyone at the face-off, no players may start on the centre ice line.

This is North American hockey, so it's rough. All players come with Sneaky Git, and getting caught for a foul simply sends you to the KO box.

No wizards
No riotous rookies
No swarming (it'll be removed from the players)
All Disturbing Presence skills will be removed - not allowed.

Each team has three, and only three RRs, ie buy three RRs when you build your team.
You are NOT allowed any cheerleaders or coaches.
You cannot buy any fan factor.
You have plenty of treasury, but you must follow the hiring and firing rules as per below. It's recommended that you keep a full bench (there are no inducements), but it's not essential.

Each team is to have an APO (except regen teams, obviously). Buy one when you build your team.

Each team is to have 50% (or more) of its players being 0-12 or 0-16 positional players. The maximum # of players is 13 on a team (no one likes playing on a team with more than three forward lines and two sets of D). Eg, the Skaven team cannot consist of 4 x GR, 2 x Blitzer, 2 x Thrower and a Rat Ogre because that breaks the above rule.

Your team must have two goalies rostered. The goalies must have the word 'goalie' in their name.

You must name your team after one of the NHL teams and teams will be grouped as in the NHL. Only one team in this league per NHL team, ie, there can only be one team named "Edmonton ....". Feel free to play with names, but make it clear enough for everyone to understand.

Eg, the Commish's team is the More-Real Can-Do Aliens (ie, you can't take Montreal as a team, it's gone). I'll keep an updated list on this page (or once I figure out how to do a tab for it).

INJURIES after a game:
1. Your players are under contract, so you are not allowed to fire any players until the down-time immediately after the INSANELY CUP is played, except as noted below.
2. MNG: you can replace your player with a 'call-up' from the farm team. PM knine and I'll add in a normal lineman with Loner, and none of the hockey skills. Or, you can just play short-benched for a game.
3. Niggles: The person can still perform, so you are not allowed to fire them.
4. Stat decreases: The contract has been breached, so you are allowed to replace the player. You can do this on your own via your team page, then contact knine to get the hockey skills added.

Play:
There are no inducements allowed.

All good hockey players know that passing is where it's at, so, you CANNOT score if you haven't made a pass on the turn you score (unless you have only one player left, or if the other team has pulled the goalie in the last four turns, ie turns 13, 14, 15 or 16 - see below for more info on this).

GARBAGE Goals: There will be occasions where the puck ends up sitting by itself in the touchdown zone (including in the wide zones). It can be picked up for a goal.

GOALIES:
You must place one player (a goalie) on the goal line between the hash marks - he must normally remain in the net or crease.

Goalies may leave the net/crease area for these reasons:
1. Goalies have pass block and may leave the crease to make a passblock action.

2. Goalies can leave their crease to pick up a loose puck anywhere within 4 squares of the crease (so, you could reach almost to mid-half, ie the sixth square from the end boards).

3. If a team is losing: Goalies can leave the crease on turn 13 (ie, turn 5 of the 2nd half, or later) and become a forward (this is akin to pulling the goalie). Anyone pulling the goalie, must say so in chat. It's a penalty shot if you don't announce it first. If a team has pulled their goalie (ie, the goalie is acting other than in accordance with the rules above about remaining in the crease), then the other team can score without having to pass. If you pull the goalie, then that player acts as a forward for the rest of the drive (and can be hit, regardless of where he is, that includes surfing and in the crease/net). If a TD is scored, then goalies start in the crease again and revert to being a goalie for the faceoff.

The following applies to goalies (ie, if you have pulled the goalie, he’s now a forward and this doesn’t apply):

1. If a goalie has the puck, he MUST pass or hand-off the puck as the next dice roll the team makes. You can move other players first, so long as there isn’t a dice roll involved.

3. No one can hit or be hit by a goalie. Goalies get Nerves of Steel (which allows them to pass the puck when someone is on them (reflects the fact that hockey players can't maul a goalie). Goalies can be chain-pushed, including into the net, but NOT off the pitch.

4. If the kick-off table result is "High Kick" or Quick Snap, and the puck is forecast to land within 4 squares of the crease, you may select the goalie to move to the puck. If he fails to catch it, and it lands 5 squares from the crease, the goalie CANNOT play it.


You can have as many of your players in the opponent's goalie crease/net as you like.

Only one goalie on the ice at a time (unless you are out of all other players).


Of the six players on the ice, two must be from the 0-12 or 0-16 positionals - these are your Defencemen (you could use them as goalies if you like), but they can go anywhere on the ice, like Bobby Orr (unless the linemen are all CAS'd - then you can use the other players as Defence). Ie, the skaven team cannot field four gutter runners (unless one of them is a goalie).

For the faceoffs, only one player is allowed in each wide zone.

PENALTY SHOT RULES:
1. If your opponent earns a penalty shot, you are not allowed to move any of your players between the next two of your opponent's turns (which should give him a chance to pick up the ball, pass it and run in); except that defenders are allowed to move their goalie for a passblock action.
2. If a penalty is called - the person who committed the penalty gives up their next FULL turn. Ie, the offending coach can finish their turn if they've already made a move. This rule also applies in a blitz situation.
3. Defenders are NOT allowed to use shadowing or tentacles if their opponent has earned a penalty shot.
4. Once the coach with the penalty shot has had their two turns, then the offending coach can move again - regardless of what happened.
5. If the coach taking the penalty shot breaks the rules during the penalty shot, the other coach gets a penalty shot (after the first coach has had two turns, even if he broke the rules on the first turn of his penalty shot).
6. If a penatly shot situation comes up too late in the game for a complete two turns, then the other team only has as much time as is remaining. But, that is no excuse for rule-breaking.

Other rules:
Perfect D: you can line up anywhere, even on the centre ice line.
Blitz: as per normal.
TTM: A TTM is a pass for the purposes of needing to throw a pass in the turn you score.
Pass to score: a handoff is not good enough. There must be a pass. A Dump-off that happened in your opponent's last turn does NOT count as the pass required for you to score.
Leader skill: is allowable. The ONLY skill you can't take is disturbing presence.

Wanton rule-breaking (like purposely scoring in the widezone; or disregarding the "don't move when the opponent has a penalty shot" rules): The penalty will be loss of four points in the standings for the purposes of making the playoffs. Hopefully we don't have someone that does it repeatedly.

Any uncertain rule violations will be reviewed by the Tribunal (me).

If for some crazy reason there's a FUMBBL crash and the game can't be recovered by admin, then if the game has completed turn 12 (ie the clock says turn 13), then the result stands, and it is considered an uncontrolled crowd riot with the game being called by officials. If it is turn 12 or earlier, the game is to be replayed in full - yes, some SPP might be different - thems the breaks.