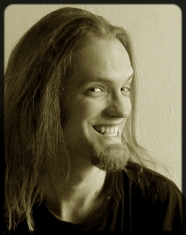 Basic idea is that players don't choose skills freely, but based on what they have "learned" through assimilating (technically: killing) opponents. A first draft of the rules for this can be found on the bio of the team linked above.

Now, this could be particularly interesting if several teams existed (possibly in various divisions), but they all share the same "hive mind" (ie. the knowledge base where the skills of all dead players are recorded). I myself would probably create a team in Ranked and another one in the Box. If other coaches did the same, we'd be able to feed the hive mind more quickly, even if some of us rarely play.

Now, the perfect race in my opinion is Chaos Pact, for several reasons:

1) Marauders are human and have the widest skill access found on all teams.
2) Their positionals can be added to the roster once suitable opposed players have been assimilated (ie. killed). Makes for great fluff and adds a strong random element to it.
3) Marauder-only teams are dirty cheap, so they can start with a lot of re-rolls - again, fitting the fluff of the hive mind (as team re-rolls represent team training and coordination).

(Nurgle would fit even better, as they do in fact "assimilate" their opponents - but it would have to be an all-Rotter team and that is just much less fun and would probably lead to coaches abandoning their teams once they start suffering severe losses thanks to Decay and no apo.)

As for the fluff, I'd probably make it an homage to the Borg, but wouldn't really make it the theme (as it doesn't fit into the world). Something like a "Cult of Borg" would be rather funny, I think.

Would anyone be up for this?

Edit:
If you're in, feel free to create a team, but don't ready it yet! We should talk about a naming convention (for both, teams and players) first!

Spreadsheet could work. Or simply reporting kills in a PM conversation/forum topic. The latter also creates some publicity. :-)

And yes, I assume the list will stabilize eventually and the teams would look somewhat similar. It fits the fluff and it's an interesting experiment - and WAY down the road. :-)

I'd include starting skills, simply to make it more random. After all, the "real" Borg are looking for racial characteristics as well.
Posted by the_Sage on 2014-11-19 11:43:33
hmm, so if I hunt clawpomb in the box, both your team and mine could either become low tv clawpomb spammers, or have +AG trolls. =P

So the skaven/gobbo/delf/troll/ogre/mino kills get tracked in the hive mind as well? So as soon as 1 gets killed by 1 team, do we all get to buy one? Do we get to replace it when it dies?
Posted by Rabe on 2014-11-19 11:46:15
Sure, you can try to manipulate the hive mind by hunting particular players. :-)

The renegades/big guys would be tracked individually per team, as the hired player should basically be the one assimilated! (Just like Nurgle would do with Nurgle's Rot, only that these players keep their racial characteristics.)
Posted by DrPoods on 2014-11-19 11:51:07
This might be the idea I was looking for...

Maybe I could do it with Nurgz. But they don't have to be all rotters. Just cannot take skills they haven't killed. i.e Cannot take block unless they kill a block player etc. Once the block player gets killed they can all take it on appropriate rolls. Warriors/Beasts etc.

@Poods:
As I said, Nurgle would be perfect for some reasons, but I really don't like having playes as different as Rotters, Pestigors and Nurgle Warriors. They should really all look similar for the right "feel".
Posted by Rabe on 2014-11-19 11:57:12
Also, Borg are very resilient and can even regenerate. That really doesn't fit with Decay (though Regeneration obviously suits well).
Posted by DrPoods on 2014-11-19 11:58:10
Just looking for a good reason to have a long, long term Nurgz team.

Each team that kills a player adds their skills to the 'Bank' and the next player to skill chooses any skill from that bank. That skill is then removed.

I like Josh's idea on skill bank as well, keeps it more random.
Posted by gjopie on 2014-11-19 15:19:12
'One in, one out' could work, but I don't think it would keep it more random, especially if you can pick the best skill from the list. Of course, the other problem would be a lack of skills to pick, so you'd end up with a lot of the "default" players (DP, TS, FA).

This is probably making it too complicated, but one way to do it could be to assign a skill randomly from the assimilation list, with the more common skills having a higher chance of being picked - ie. if the list is Block x2, Tackle, and Dirty Player, each new skill up would have a 50% chance of Block and a 25% chance of the other two.

As I said though, that is probably too much. I think I'd vote for the original idea, with the most common skills picked. A lot of the players would end up similar, but that surely fits the theme?

With the original idea I think the problem (if you could call it that) is every player will always develop exactly the same. I know this would fit Borg, but still it's not always fun to play. Especially this will be a problem as guess what the most common skills encountered will be! Block > Mighty Blow > Claw etc. This will then likely lead to a group of repetitive killers which isn't the intention.

The problem with a one-in one-out skill bank idea is that early on you will be earning skills quicker than you're killing players, but maybe not later when killed players have multiple skills each. What about operating as a Cube and a Hive. Each team is a Cube, the central is a Hive. Each skill earned gets added to the Cube and the Hive, and a player can pick from either. Or picks from the Hive on doubles etc?
Posted by mister__joshua on 2014-11-19 17:28:27
Just to clarify my last comment, with the original Hive idea it's almost impossible that anything will knock Block off the top spot at any point as it's the most common skill. This would then mean all players on all Borg teams have Block as first skill. The second would likely be Mb or Guard (dodge being up there but a double for marauders).
Posted by tuomaa on 2014-11-19 17:31:54
How about assimilating more meta techniques: Acquire skills/positionals during a hive sprint (week?) and give teams picking order of the pooled/banked knowledge according to hive sprint scoring.
Posted by Joemanji on 2014-11-19 17:38:02
Having Block as first skill is likely, but not exactly bad. Ultimately as mister__joshua said this may end up with the traditional 'killstack spam' team.

Another idea might be for players to have to chose a skill from the LAST player the team (or hive mind) killed. This would lead to much greater variation.
Posted by Rabe on 2014-11-19 17:54:14
Thanks for the great interest! I'll open a forum thread later today or tomorrow and present a slightly tweaked version of the concept, based on your feedback and further considerations. :-)
Posted by Calcium on 2014-11-19 18:02:47
I love this idea, and I have a BOTG team pending.....

I have called it BJORN BORG :)

Even cooler would it be if we had standard Borg pics for all player types...
Posted by awambawamb on 2014-11-20 20:15:44
count me in. maybe opening a borg league? every players could have one borg team and one non-pact team.