(By humans, for humans, with humans. And one hobbit. Possibly a dwarf. OK, if you must, just one stinking elf.)

~ Draft League Extraordinaire ~
The King of Bretonnia is sick of his best men questing for a stupid grail, and he wants to see some Blood Bowl! Jealous of the Empire's massivly popular DLE Blood Bowl league, he has demanded his dukes spare no expense, and put together a rival league. The dukes will be hard pressed to find champions initially, but they are intent on paying what is required to recruit foreign players into the Bretonnian draft. The King has commishioned the 'Knight of Valor Trophy' and will present it to a duke's winning coach.

Inducements in DLE2 are limited to the following:

If the difference in TV between teams is 100k or greater, the lower TV team many purchase 1 Wandering Apothacary.

For every additional 100k difference, the smaller team may choose an inducement from the list below. You can only take something twice once everything has been taken once.

DLE2 uses the basic human roster with the following 3 additional player types. These 'xeno' players can be traded as normal if they have skills.

Starting with season 6, the Halfling Hopeful will be a mandatory player. (You always have to have one rostered, but can be replaced by a merc lino if MNG)

Each coach is entitled to start each season with a Coach's Champion. A Coach's Champion is a 60K (or less) player with skills selected by the coach. The champion comes with the appropriate amount of SPP for the skills he posesses. The champion belongs to the team and is never able to be traded. The champion's player bio must begin with the words 'Coach's Champion'.
If the champion is killed or retired, a new champion can be created following the next draft. A coach may not create an identical champion twice in a row. (The champion must have a different skill set or player type) If a new coach takes over a team without a champion, he must also wait until after the draft to create a replacement champion.
The champion may not be a dwarf, elf, or halfling.

Before the initial draft of Season 1, each coach may create one lineman, known as the team's 'Coachable Veteran'. This veteran comes with 31 SPP and may be given 2 normal skills from the General table, and may make one skill-roll for the selection of the 3rd skill. The veteran belongs to the team and is never able to be traded. The veteran's player bio must begin with the words 'Coachable Veteran'.
This is a 'one time only' benefit for a team, and if the veteran is retired or killed, no new veteran will be created for the team. (Expansion teams will also get a Coachable Veteran)

Blood Bowl players that have signed up for the Bretonnian draft in Season 7 will start trickling in here all year.

All draft players are rolled in Discord using the generation tables available for viewing there. Check '#blitzercreation' to see the dice thrown for player 0031 and the birth of the Chimp's chain-saw.

Coaches currently authorized to roll new players: The_Murker
The draft will be held after the championship game each season. Coaches will have 48 hours to make trades before and after the draft. The innaugural draft consisted of 8 rounds of drafting from a pool of 134 players.

New Mechanic: After all 120 players have been rolled randomly, one stat of each kind will be added randomly to the blitzer, catcher, and lineman pools. Two random stats will also be added to the thrower and ogre pools. This should ensure a high enough quality draft, keeping it interesting for everyone involved.
DLE2 uses the BB2016 'Select 3 MVP' rule. (Piling On is also absent)

Post Draft* skill rolls are drafted players with pending skill-ups, skilled using dice rolled in the Discord chat channel called '#skill_rolls'. The 'test roll' is announced made with 3d6, followed by the 'real roll' of 2d6. The dice roller and the witness may be any DLE2 coaches, other than the owner of the player.

If the player's owner is not present to witness the rolls and make an immediate skill choice, he may file his skill request in channel '#skill_requests' by entering the following data in a post:

Once a skill request has been actioned, a member of the skilling staff will edit the coach's roster and delete the skill request from the #skill_request channel.

Team's may trade players and certain draft picks in between season's before and after the draft and at the 'Mid-Season Trade Window' (between games 7 and 8). A team's 1st and 2nd round draft picks may never be traded. [clarification: The PLAYERS drafted with 1st and 2nd Round picks may be traded after the draft, but the right to pick in the 1st and 2nd round may never be traded. Each coach WILL pick in the 1st and 2nd Round] Only the 3rd and 4th round picks of the next two drafts may be traded.
(eg: During Season 3, only 3rd and 4th round picks for Draft 4 and Draft 5 may be included in trades. Draft 6 picks are not able to be traded until the completion of Draft 4)
The Post-Season Trade Window opens immediatly following the championship game and closes when the first pick of the draft is drafted. The Post-draft Trade Window opens when the last pick is drafted and closes when announced by an admin (whom will always give at least 24h warning). The Mid-Season Trade Window opens as soon as both teams involved in a trade have completed their 7th game of a season and closes when announced by an admin (whom will always give at least 24h warning). Any 'trading' between coaches before these windows is simply a gentlemen's agreement, and is not binding. A trade is made official once both coaches have announced the identical trade in the official Trade PM chain during one of the trade windows. PMs made at the wrong time are likely to be ignored by management. Once both coaches announce a trade, DLE2 management will action the trade and adjust the rosters. In this way, there is no requirement for DLE2 management to keep track of anything other than a limited number of 3rd and 4th round picks traded. There will be a minimum of 48 hours before a draft, after a draft, and during the mid-season trade window in which coaches can announce a trade.

*Every coach will ALWAYS pick in the first and second round. What you do with these players after.. that's up to you!*
Conferences, Divisions, and Play-Off Structure

The DLE2 is a 20 team league divided into 2 Conferences, each having 2 divisions of five teams. The 'Knights of the Lance Conference' consists of the 'KoL North' and 'KoL West' divisions. The 'Knights of the Sword Conference' consists of the 'KoS South' and the 'KoS East' Divisions. Each regular season will consist of 14 games, meaning two seven-game tournaments, with the Mid-Season Trade Window in between. The first tournament will see each division square off against it's conference rivals, and in the second half of the season each division will play against a division in the rival conference. (whichever division it did not play against in the previous season) In this way, each team will play each team in the League a minimum of every other year.

Eight teams will make the play-offs each season. Division winners will automatically advance, and the remaining two teams in each conference with the most points will also advance. The DLE2 awards 3 points for a Win, 1 for a Draw, and 0 for a Loss. In the event of a tie between team's, the tie is broken if one team has defeated the other more often that season. If not, the tie is broken by whichever team has scored the most touchdowns that season. If still unresolved, the tie is broken by whichever team has had the fewest TD's scored against them. If still undecided, a coin toss in Discord will decide. In the event of a complex draw between 3 or more teams for these 2 'Wild Card' play-off spots, a fair and agreed upon method to decide the winner will be conducted in the Discord chat room.

To decide each conference champion, the #1 seeded team will play the #4 seeded team, and #2 plays #3. (Seeding is based on points and the method described above) The winners of these matches will play, and each conference champion will play in the championship match to compete for the 'Knight of Valor Trophy' and to be named season champion. Unlike regular season games, play-off games will always go into overtime if required.

Clarification: Not only is Play-Off Seeding decided by the 'Points Earned, TD For, TD Against, Coin Toss' method, but so is Draft Order, and anything else that tries to establish which team is 'better' or 'more powerful.' Eg: If two teams were eliminated from the play-offs in the first round, and both scored 24 points during the season, which ever team had more TD For that season will draft after the other team.
The 'Knight of Valor Trophy' is a custom miniature, cast in solid brass, made for the DLE2 by Hero Forge miniatures. It will be mailed to each season's winner for a photo op. What local land mark will you pose with the trophy in front of when YOU win it? 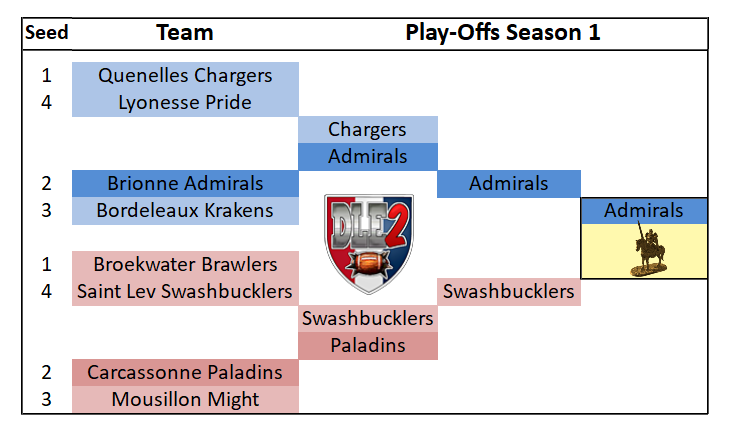 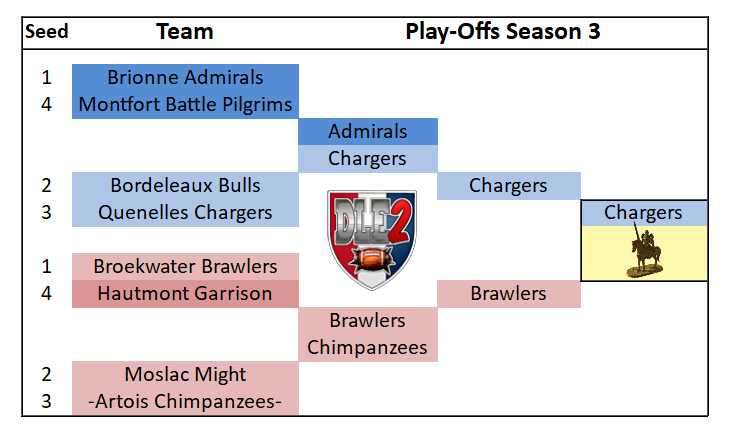 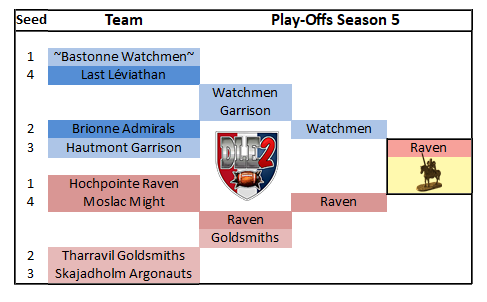 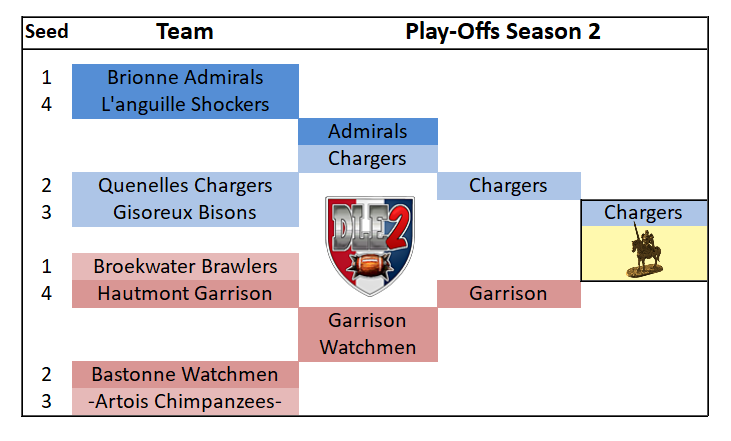 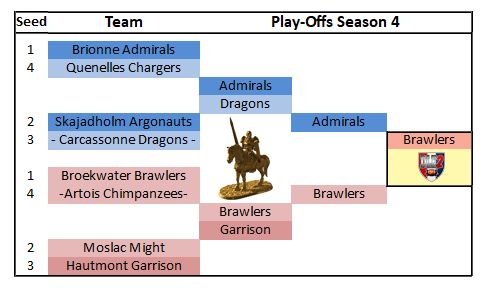 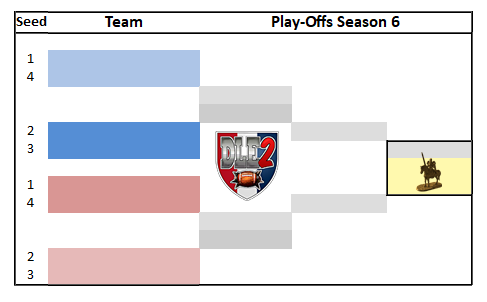 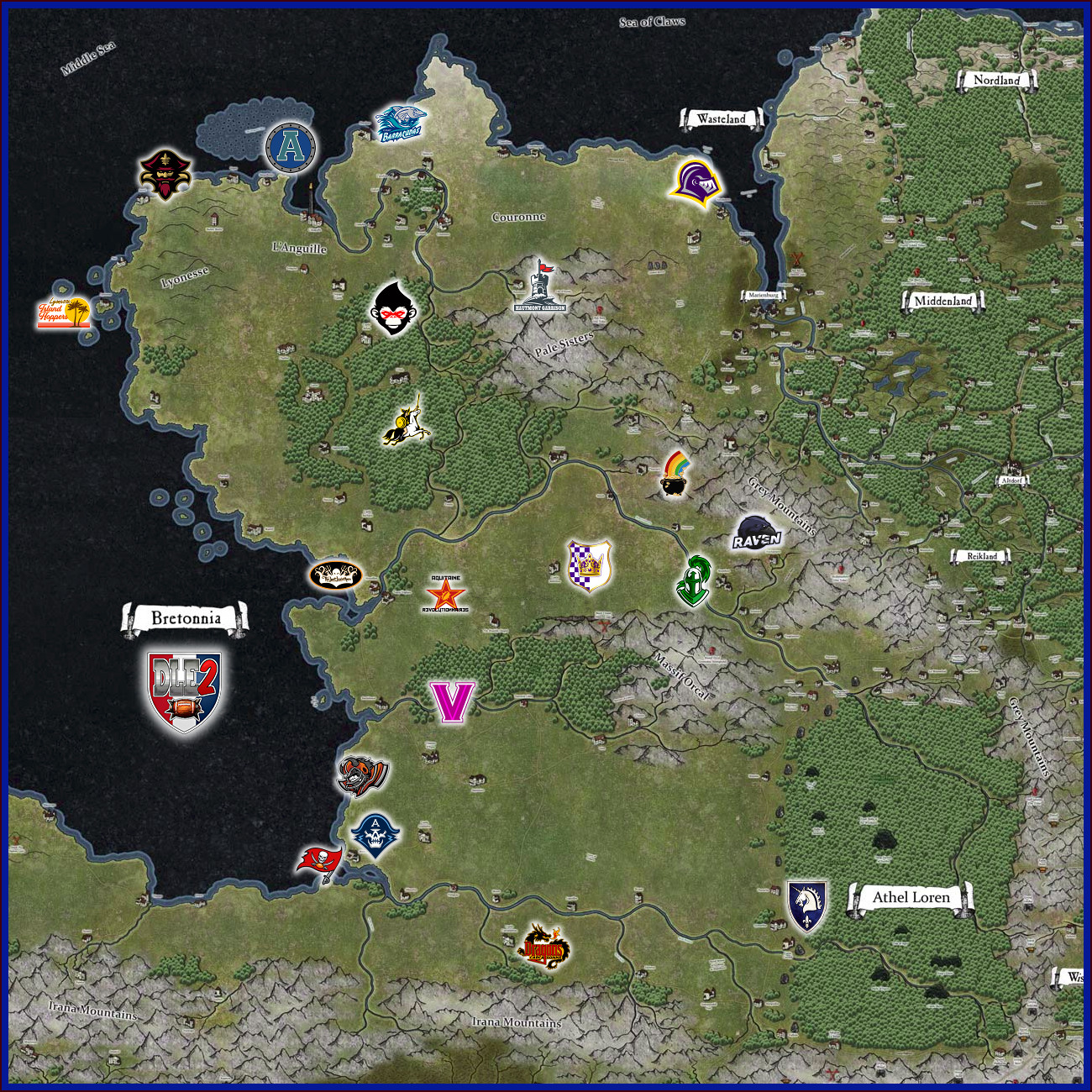 LATEST NEWS
27 October 2020: the_Demon waited long enough for det to move the Might to Skajadholm once again rebooting the Argonauts.

09 October 2020: bghandras has to step down and veteran horekim brings the team on a tour creating the Brittany Spears.

01 September 2020: Darkwing appears after a long absence and det takes the opportunity to hand over his team to him, but he'll be back someday!

05 June 2020: DLE2 expands! Welcome back to Meanandugl, bghandras, and former 2IC, datom! Big welcome to Rictor for taking up the DLE2 expansion challenge. May all 4 new franchises give as good as they get.

26 May 2020: Gratz to neubau and the Raven, who win the Championship for Season 5. Gratz to Matthueycamo and the Swashbucklers for winning the Jester's Cup!

25 Oct 2019 - Coach Astrolonim drops after only one game but coach Arturidas steps in immediately! Welcome and enjoy your stay!

Brawlers win the Knight of Valor trophy for Season 4. The Watchmen win the Jester's Cup. Gratz to bghandras and SpecialOne. Welcome back to neubau (Brawlers), and a warm welcome to Astrolonim (Dragons) and Lasgalen (Nouveau Uesin Saints)

30 Apr 2019 - Coach Zoebugs has to drop out unfortunately, but his spot is quickly filled by another DLE2 veteran, JackH. The Mottes-and-Baileys, ex Krakens, once again move and change name. This time they play under the name Goldsmith, from the fabled town of Tharravil.


We've got 16! Thanks very much guys. I'm over the moon with our coach selection.

We've got 16 great league warriors all familiar with the popular 'Draft League Europe' to play in this 16 team draft league.

A 'one time only' Coachable Veteran (3 skills)

A draft, of course! (Players are rolled on Discord using dice tables available for viewing)

Controlled Trading. Only players, and 3rd or 4th round draft picks can be traded

A chance to get the custom icons you have always wanted. Pick your uniforms. Decorate your halfling! (Go on! They like it!)

Plus.. there's a CHAINSAW! (roughly 1 in 200 players created for the draft might have a special weapon)

The first draft of 8 rounds only took a week! It will be 4 rounds ever after.

Please PM The_Murker or neubau to join the waiting list in case a coach needs to drop out.