On certain mornings, as the first rays of light radiate from the dawning sun, a long white cloud can be glimpsed in the distance over the rippled blue waters off the coast of the Southern Wastes. Tormented by the stifling heat and relentless dry winds turning their skin to leather, the Blood Bowl tragics are contemplating an off season going to seed and withering like weeds under a good dose of ‘Roundup”.

Then one day in late December a voice is heard drifting over the waves.
“Cricky dick! Bro, stop stuffing ya face with greasies and come here. Can’t be sure based on the togs, but there is some pakeha cuz over other side.”
“Sheez Bro, you ain’t wrong.”
“Now that Chrissy is done, you think that they might be wanting a tiki tour over here and play some Bloodbowl?”

The sun-addled brains absorbed the word ‘Bloodbowl’, triggering an involuntary response. Before you could say, “couldn't see the road to the dunny if it had red flags on it”, all the blokes and mates got a into g, grabbed their gummies went sailing of to Aotearoa to find Waikikamukau and play Bloodbowl in cooler climes.

“Sweet as. Hey bro, rattle your dags and make sure the chilly bin is chocka with L&P, get your nana to jack up some savs and pavs and don’t forget the chocolate fish from the dairy. This going be a piss up large so better make sure that zambuck is around in case some dag carks it”

Open to all SWL teams new and old, not currently playing in SWL proper. No TV limit and no age limit so whether you are a LRB4 legendary team or a CRP rookie you are welcome.

Format. Swiss chess scheduled rounds with seeding based on TV with overtime to avoid draws. Basically the meaner and nastier you are the more likely you will play together for the first couple of rounds.

The festival will use all the optional rules for Claw, Piling On, Right Stuff, Sneaky Git and Stand Firm. So any dirty fouling ‘flings and more than welcome to come and put the boot in.

The festival management have done a great deal with the local wizarding guild and got them to sponsor each game with some special items. This is pot luck, but every team will receive 100 gold to spend with the guild on CARDS before each game.

Prizes to be determined, but as with all festivals, everyone is a winner.

Sign up here, post here and lets have a great off season blast before SWL starts afresh in 2017

The Waikikamukau Festival kicks off on Boxing Day!! 26th of December the day after Christmas ;-)

Long term denizen of the Southern Wastes <<<deposed>>> has secured Mrs Smack as naming right sponsor for SWL Fringe SMACKS. Fast, furious and fun for players and fans alike, PM ramchop or subscribe to the SWL Fringe Touneys Forum Topic to keep in the loop.

SMACKS are KO tournaments of at least 4 Fringe teams. Arranged at the drop of the hat in SWL discord, or perhaps flagged a little ahead of time in the forums. Fringe Teams, old and new, big and small, loved and hated, can stretch their legs and show they still have what it takes to win something.

TV restricted SMACKS are for those terrified to match up to the big boys. First round TW must be at of below the stated level. Subsequent rounds, TV increase cannot be more than skills gained, winnings won, or fan factor ummm factored.

The Greatest SMACK is of course the unrestricted OPEN

And a new addition. Sevens SMACKS, open TV. Max 7 on the pitch, minimum 2 on LOS, and none in the wide zone. 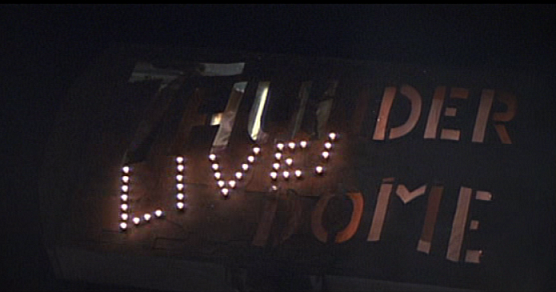 THE THUNDERDOME
- AN SWL MAJOR


"Listen on! Listen on! This is the truth of it. Fighting leads to killing, and killing gets to warring, and that was damn near the death of us all. Look at us now, busted up and everyone talking about the Great War! But we've learned! By the dust of them all, we've learned. Now, when men get to fighting, it happens on the pitch, and it finishes on the pitch! Two teams enter; one team leaves."

WELCOME TO ANOTHER EDITION OF THUNDERDOME!

Another year has passed, and it is back!

After two hard years on the Thunder Road, Fringetown has this year decided to open the gates to any team that dare enter!.


DO NOT READ ANY FURTHER!!!

... unless you want to know all about the prizes, the fluff, the secret weapons, and the rostered star players...


STAGES
The tournament has 3 stages.

WHAT IS THUNDERDOME?
A tournament in Fringetown (aka godforsaken place) named after the local Blood Bowl stadium. A slightly oval shaped astrogravel pitch, with a massive overbuilt steel dome that spectators climb onto.

Fringetown (aka filthy pit of swine) has rigged the Thunderdome with all kinds of traps and weapons. They have also rigged the draw -- making sure the biggest teams face off towards the end of the knockouts.

***Did you know...
When the Tunderdome hosted the final of the Big Guy Cup between two local ogre teams, the Big'un Bogans and the Bogan Bigwunz, the game had to be suspended at half time as the entire Thunderdome collapsed under the weight of several hundred cheering ogre fans climbing back on after their half time snacks. The second half was played a whole year later. Then as a Goblin 7s game.

THE FINAL
"Two teams with a gutfull of fear!
Ladies and gentlemen,
boys and girls,
dying time's here!!

This is the fight for the Grand Prize. The reigning champions compete to keep their prize for another year, while the challengers will be trying to take it off of them.

The loser must get ready to Face the Wheel!

GRAND PRIZE
* They come as a pair, and you must take both. Should one of them leave (retired), the other will follow
** You cannot pick Master Blaster
*** The Southern Wastes respect the Thunderdome champions and referees won't ban this Secret Weapon player

*B&C gives ST 7 and caps player to MA 4 (can be increased later). Number of skill slots vary on starting strength.
**Caps player to AG 3. Cannot be given to player with Pass access.


ROSTERED STAR PLAYERS PRIZE
"The little one is called Master. He's the brains. He runs Underworld.
The other one is Blaster. He's the muscle.
Together they can be very powerful."


THE WHEEL
"Bust a Deal and face the wheel.

Justice is just a roll of the dice. A flick of a coin. A turn - of the Wheel."

The losing finalist AND the bottom team of the Swiss stage will be punished with one of the following (roll a d10):
* permanently weakened physique but mentally strong after hard labour
** reeking and traumatized after repeated pig torture

Deep in the Southern Wastes...

...desert winds race uninterrupted across endless leagues of scorched earth. Ever erratic, the winds this particular day offer up the fractured remains of a skull, as it comes skittering across the sands. For an age it has wandered the desert like a nomad, seemingly doomed to the mercy of the winds, but finally its path has now terminated at this barren piece of ground marked out in the middle of nowhere. A behomothian orc spots the skull as it comes to rest, and looking immensely pleased, wanders over and straps the skull to his shoulder pad.

This is the Fringe... there may not be much else, but there is Blood Bowl!
WHAT IS SWL FRINGE?
The SWL Fringe is the entry portal for new coaches to the Southern Wastes League, and is home to most non-league Blood Bowl in the Southern Wastes. In these barren lands new legends are born, and old legends come to die. Play free standing fringe games versus other roaming teams; train your team for the next Fringe Tourney; raid Old World tournaments and bring back trophies & glory to the Wastes; prime your team for the SWL through the gruelling Trial of Blood; or stand in/on the rookies' way/throat as one of the Blooders.

ENTER THE FRINGE
As with the SWL, to participate you must be living in an area within the broad GMT+7 to GMT +12 timezones. (Usually this consists of Australian/New Zealand and East Asian areas). Each coach is allowed any number of [L]eague teams. These can be any team you like, a brand new team, an SWL team, or an [L] team that once played elsewhere but have migrated to the Fringe. Once in however, they're ours! No dodging in and out of the group except for when raiding Old World tournaments.

BLOOD BOWL COMMUNITY
AUSBOWL - The no. 1 resource for fantasy football in Australia.
NZBBN - The Home of Tabletop Fantasy Sports in Aotearoa.