24 coaches online • Server time: 04:00
* * * Did you know? The most valuable player is Thursdaynight Guitarclub with 96 MVPs.
Log in
[R] Blood Sea Buccaneers 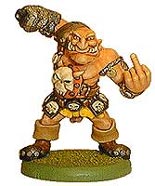 Deep in the heart of the great maw that immortal presence is watching him, gauging if Gromstomp has what it takes to reach for the heavens and be declared LEGENDARY!!!

All Time top fouler for ogres on a Human team in the CRP era. His name is GromSTOMP for a reason you know.

Gromstomp has been stuck on 166 SPP now for 4 games in a row. Is some mystical force opposing his rise to LEGEND?

Game 96 and Gromstomp finally ascends to the ranks of Legend!!!!

Gets traded to the Der Green Tide, retired from the Buccaneers.

Gets caught up in some devious plan of the Great Maw. Blows himself up with C4 and then is brought back to life and un retired and joins the Buccaneers for their FUMBBL CUP run in 2015. All because the Great Maw saved Lord Borak from his captivity at the hands of a renegade band of Pixies.

sends in the Boot and sends this frog to the RIP Bin. RIP frog legs

sends in the boot and fractures DeMaio's leg, Gromstomp hates the Hellbound and loved watching DeMaio limp off the field Busted up good

Sends in the Called shot RIP on Doomsday and STOMPS him to the RIP BIN!!!!

Game #179 and Gromstomp takes a boot to the head for the RIP!!! Johnny is on the spot and rushes out and brings him back.