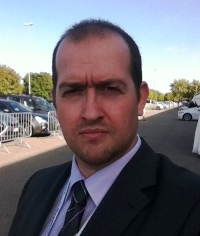 Everything was ready, invites had been sent, but the Hellfishes failed to reach the Blood Bowl arena in time for the event!

"We don't know what happened. We were making our preparations when I received a call from a so called "Work Boss" who claimed I had to prepare additional paperwork in order to be allowed to play" said President JanMattys, "and by the time we had compiled all that superfluos bullshit, the time had passed and the moon was high in the sky."

"We are tracking down that call", roars P.I. Van Helsing, "we're convinced that it came from the Bucs' side, to taint our reputation with the fans".

The Hellfishes have taken all the due countermeasures and will be ready to play next Sunday (May 13th), same time.

Blood will be spilled, we will not be cheated again!

/OOC: I'm incredibly sorry, and I want to apologize to Painstate and all the fans who wanted to spec and / or participated in the auction. Sometimes real life can be evil :-(

TL;DR; : You guys have another week to catch the opportunity of donating something as little as you want to Fumbbl participating in the Hellfishes / Buccaneers Charity auction!!! READ AND DONATE!!!
http://fumbbl.com/index.php?name=PNphpBB2&file=viewtopic&t=21807