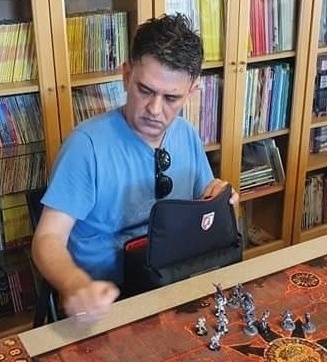 Less than two days left in Season XII: Glorious BastARRds and we had some great sprints to mark the completion of 2 yeARRs of Box Madness!

Our anniversARRy Season XIII: Lucky thARRteen is coming up (starting in December 1st) and the ARR and HLP collaboration, the newly-formed F.U.B.A.R. (Federation of Undaunted, Brave and Adventurous Races), will run a fundraiser for FUMBBL once again.

Last year the donation drive was a huge success, lots of moneys for FUMBBL, a record breaking 41 sprint season and the most drawn Brawls ever in the HLP-ARR showdown. Let's try to top that!

I may no longer be the secretARRy of finance (loot), but I still have access to our treasury, so this year I pledge the following donations:

$2 for every Goblin sprint
$1 for the rest of ARR sprints
$5 if any of you sprints with 4+ races
$5 if a race unforlorns (only Vamps, Helves and UW have won the Race so far)
$10 for this years UnbelievARR duel: both JimmyFantastic AND Harad to sprint with Goblins.

(I know, I know, Jimmy did it last year the hARRd way but he won both the Stunty and the Exploding Cup with Forest Goblins! He has to back it up with a Goblin Box sprint. Harad is a Jedi of Box diversity BUT he has so far whimped out of Gobbos! . A capital offense in these pARRts!)

HLP captain OenarLod also pledges the following donations:
$1 for every Conference sprint
$2 for every Premiership Sprint
$10 if a team wins the Double
$10 if ARR wins the ARR-HLP showdown

In the unlikely even of losing the ARR-HLP showdown, we have an "old vs new" captain bet. I'll cover the $10 if Jimmy wins the duel while happygrue will pay the moneys if Harad wins.

This year's showdown may be the ARR-HLP brawls (last brawls of December) but we may have a surprise for you. Stay tuned for announcements!

Two ways to jump on the bandwagon and help raise moneys for FUMBBL:

Be a DonatARR: Pledge for sprints, the unbelievARR duel or any other event. Just to have an idea, last year pledging $0,5 per sprint was a $20 donation (41 sprints)

Be a SuportARR: Sprint with a ARR team! Discover the joys of 16 ARR games in the Box.

Cool DonatARR and SuportARR badges in the next update, after kick off.

Put me down for $1 for every ARR sprint to start. Do you want pledges PMed to you, cdassak, or posted?

But I really can't see me doing a sprint.

And since I've mocked his try-harding on his stream - $1 for every full point the gobs have taken off Jimmy's total Box CR at the end of his 16 game sprint. So get your chorfs and dorfs out everyone if it looks like he's falling short ;)

Also maybe I will actually get an ARR sprint in myself for once.
Posted by PaddyMick on 2015-12-14 15:18:39
I pledge 10 cents for every foul Jimmy makes during his sprint