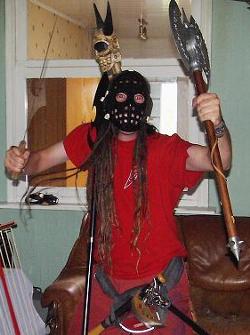 When being in this cheap depot shop, my girlfriend, much to my surprise, came to me with a copy of Cyanide's Blood Bowl for the Nintendo DS. She happens to have one lying around and since the price is 6 euries I decide to make the purchase. Ok I have read the horrendous reports on here and the low price is fishy, but hey, I liked the cover and I know my gf doesnt like the game so I had to have it! :)

First impression wast that bad, nice to see Bob Bifford and Jim Johnson doing the commenting, although they dont do comments at all we just see one of em at the start of a match. Also when the ref catches you with a foul is quite funny! The DS has two screens, the top is where the scoreboard or player info is and the bottom screen is pitch or reserve box.

So first test game in quick mode vs some woodies, the autopathing indeed is worthless unless you like to dodge all over the place but clicking your path individually with that little pen thingy on that little screen is not easy, luckily you can zoom in. In the beginning I was struggeling to get my turns done but once u get used to it its allright. But the way the AI plays feels like you play a noob who doest know the rules properly but lucks you with every move. (the fummble emote; -2d Pow-Pow, me good coach yes comes to mind)

So now its time for Championship mode. Put it on veteran (just means AI is as stupid but your dice are worse :D) cus we playz Fumbbl an weez beatz those Cyanide punkz!


Now for the AI part;

The Ai actually is so bad its not fun to play against, I took Chaos cuz me likes and been lucky to get some mvp's on warriors pretty fast to get them to skill, 2Blodge Guards, a killer (Block-MB-CLAW-Tackle) and a baller Block-Sure hands+AG.
I cant count the times those blodgers have been downed by -2d's, even some-3dice and never no tackle to be seen.

It will never put more than 3 players on the line of scrimmage, not even when receiving, always put one in the middle and two players one square from the wide zone line. And the players they put on it! :D Gobbo's put their saw on the LOS when kicking for crying out loud!!

Also when downed they seldom upright their players if you still have a player adjecent, or blitzing some non important players and not even marking the ballcarrier when he's in front of endzone.

The skill choices they make are ridiculous, almost every player takes strip ball as first skill, followed by something Dalfort would take on one of his mad teams, Catch,Strip-Ball,Pass-block saurus anyone? Catch on Ogre as first skill?!?

At least they do take +stats, AG Skaven lino, where do they put him? On the LOS when kicking, naturally I murked that fool!
Haven had a td against and am up at 2OOO+ tv, the inducements by other teams get spent on rerolls, bribes and extra apo's. Those last two sometimes arent even used apart from goblins who use bribes for the secret weapons.

So your probably asking yourself why the hell did you play it then, well my interwebs was down for a few days and even if its not grade a stuff like Fumbbl, it was enough for me to get my daily fix of Blood Bowl. Sorry for the long blog, just glad to be back! Now for some real Blood Bowl, crushing another humans pixles feels better than some silly Nintendo. (Certainly so the other way around!)
Posted by harvestmouse on 2012-06-14 01:17:34
Play goblins; you'll lose the odd one and draw a few more than that. Playing Dwarfs with them can cause a bit of damage too.
Posted by Araznaroth on 2012-06-14 01:31:28
Congrats on being the first one bored enough to read through this blog. ;) Was thinking the same thing about the goblins. When this Championship is over I'll try it with them. ;D
Posted by zakatan on 2012-06-14 02:04:03
i played a few games on the PC version, and I found it quite boring :D

i enjoy the simplicity of the zenital view and the 2D over the fancy effects. FUMBBL forevah!
Posted by Araznaroth on 2012-06-14 03:25:40
@zakatan; I agree on the 2D bit, after all its a game of miniatures, you have to imagine them moving about too. Me and a friend used to take up to two-three hours for a game, explaining in gruesome detail the injuries inflicted upon our players! :)
Posted by harvestmouse on 2012-06-14 09:48:46
There's something about a 1 player progressive mode though. It's fun to go through the cups.

Also if you aren't letting any TDs in at all though, possibly you're playing too seriously. My skaven got to around 2700TV, and at that point they were very dominant, so you could try retiring some of your best players!

I heard (not sure if it's true as I never tested it) that medium level, maybe harder than the hard level!
Posted by BlizzBirne on 2012-06-14 10:09:42
the DS version is serious crap. i have played it quite a bit since i am flying around a lot and was tired of reading all the time ... but the controls just suck (you have to click your command again and again, and then yet again before it understands what you want). the AI is as described. even on the highest difficulty level, you can bring your team to a team full of legends, not giving away a single win. i did it with four teams (woodies, skaven, gobbos and chaos) and after they have surpassed 2500 tv they usually clear the pitch regularly. games often end 7-0 or 8-0 even with chaos. tv gets as high as (dont remember correclty) something around 3800 or so? come on ...
playing here is NO comparison to the DS (or also the PC version). and by that i mean it is SO much better here with having real brains (as damaged as they might be in average) behind our moves.
Posted by CaptainAwesome on 2012-06-14 12:52:09
True story bro....

I got BB on my PSP, and I always play BloodBowl while sittin in the train on way to the university....
2150k-Hummies playin against ANY team and crushing them with 4-0 or 5-0 (btw, they´ve inducements gold of nearly 1M per match, unlike in the DS version, they spend this gold for star players and mercenaries....sometimes bribes and rerolls (which they never use, though))

This game was good enough to understand the rules and the whole system of BloodBowl, granting me some important basic skills, but it is faaaaaaaaar better and more exciting to play against real "brain-possesing" (I suppose so :P) badass-coaches coming up with completely different play-styles, much higher playing IQ than all of the AI teams summed up granting me a nice challenge....

Cyanide on X-Box cost me a lot of time in developing my game. I started BB last fall with cyanide and played it till like dec. When I got my ass kicked here, i fell back to xbox, for motivation purposes and it degenerated everything I have learned from the fumbbl-humiliations...

Even now I sometimes unconciously get back to this style, here eg. http://fumbbl.com/FUMBBL.php?page=match&op=view&id=3296518 and you can see what came out of it ;)

I do still have a Clawpomb-team there and if i feel like killing some pixels i play against the AI, since it makes god cry if you do that to real players...
Posted by the_Sage on 2012-06-14 16:46:57
Well, to be fair the cyanide game does do multiplayer, and its AI is better than the ffb client's AI. But yeah, it sucks so hard that playing against it makes you a bad coach.

I started with woodies on Cyanide single player, then discovered fumbbl.
When my internet was off I tried chaos, and though my AG4 and AG5 pass block chaos warriors were fun, I got bored. Then went goblins by the same logic as above, but decided the AI just sucked too much.

Ont issue is that playing against cyanide AI has really ruined my sideline play.
Posted by eldritchfox on 2012-06-14 22:34:25
If it wasn't for the DS game I'd not have rediscovered Blood Bowl. About 18 months ago I found a copy for £5 and recalled my happy teenage days playing.

After a few games I relearnt the game and found a local club and plunged into the bitter sweet depths of addiction.

So thank you Cyanide for making Blood Bowl part of my life again. Even though your game is bugged to hell and the people online are whining turds who quit as soon as the game goes against them.... or is that just my experiences?

I never played BB on Xbox (due to no havin a xbox at all :D)
As I can see in the comments, AI seems to differ on different platforms....
AI on the DS seems to be more stupid like 2 ogres in maths exam, while Xbob AI just look like..."usable"

PSP opponents are not that smart, but as I said, they´re good enough to enhance my skills (I would be a pretty cherry-pickin victim without Cyanide) but after ur skills passed a certain point, u HAVE to face real coaches; (nearly) every coach is more challenging than the (PSP) AI....and don´t talk about the DS :D