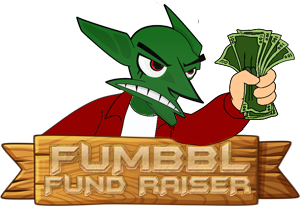 Even in death, his blackbox legacy lives on:

He died as he lived, taking risks. Desperate to win a match 3-0 to claim the extra 3EUR from Jopotzuki, he was thrown deep into the chaos half on a blitz. The team was 2-0 up so he was confident the win was on the bag and he'd selflessly handed off the ball earlier in the game to give a TD to his mentee, young Phil Noseplatta. But none of this at the forefront of his mind as he easily landed and ran to stand under the waiting kick. Which he promptly dropped because rolling a 3+ is so damn hard. He was quickly surrounded by two burly looking beastmen and a third rushed in with horns lowered. Fanky took the hit and something felt wrong immediately. All of the colour drained from his world and his body didn't go limp, it collapsed in on itself. The team apothecary, Fanky's personal apothecary, ran onto the field but pronounced Fanky dead. The small spark had been extinguished.

Later in the game, Phil took a niggle from a beastman foul but that is barely worth mentioning. Today is about Fanky. Raise a glass