45 coaches online • Server time: 10:45
* * * Did you know? The player with the strongest arm is Cherrystone Hotpack with 5758 yards passed.
Log in
mekutata
Online 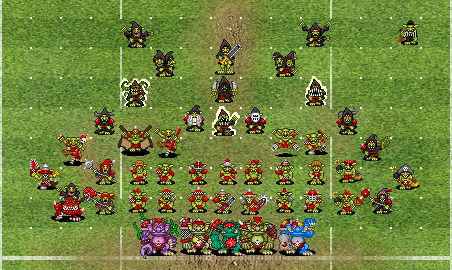 I am thinking about a new league concept with only Goblin teams and how that could look like.
I'd like to include mutated night goblins as Starplayers.
Based on some conversation with some coaches this spread to ideas of other possible Goblin Starplayers/positionals with not so much focus on mutation, but simply more armour or otherwise hardly used skills.
If you look closely you can see for instance a Goblin Assassin with not one but two(!) knives, so logical skills: double block, stab and weeping dagger, finally a useful Assassin in BB ( it's funny though to read old GLN issues and see coaches praising the new delf positional back then).
Or two specially armoured Gobbos for the LOS (one with helmut's helmet as protection, another one with a dwarf beard "mutation", so obviously +1av and thick skull)

Bribes would be obviously a must. And i even think this league should allow conceding and timing opponents out.
No idea yet how to prize star players and what to keep in mind to keep this balanced and silly.
This is not so much in a serious planning phase now, it's more the playing before the planning for possibly some playing one day.
reply or dm any ideas, suggestions or give note if motivated to help me on this. (could need someone who writes fluently gobblin language)

Have a nice day

Edit: https://fumbbl.com/note/mekutata/starplayerroster a first attempt on the potential Stars of this leeg
Posted by Dutys_Fist on 2020-05-15 15:07:37
How is your league going to differ from essentially the stunty leeg ruleset and mantra?
Posted by mekutata on 2020-05-15 15:38:35
No halflings, no skinks, no Gnomes, no Albion Fae.. just good old Goblins.

A big emphasise on inducements to allow wild combinations of starplayers and importance on foul play with cheap bribes for both sides.
Also I'd aim to create this for a (small) closed league with seasons and not an open league. So more like the Draft leagues or cowhead's universities.

Ruleset:
I don't know the best rule set yet and that's why I am curious about other coach opinions, it would be up for debate. I am roughly in this direction:

Fouling +1 when not in tackle zone should be in imo.

I love the optional functions for Sneaky Git (Sneaky Git functions as Guard on foul assists. Banned Sneaky Git players are sent to the KO box instead.) wish you could include both as different skills. Combined as one skill they would be a bit OP in an environment of mostly AV7 players.

I wonder what role the different variations of Piling On would play with most likely only basic Trolls being able to access that anyway.

Mantra is obviously something like try hard, get stomped in Turn 16 harder.
Posted by MrCushtie on 2020-05-15 17:48:32
Would Right Stuff negate Tackle? I played a few Stunty leeg games in a short league and once somebody had a Tackle player it wrecked everyone else...
Posted by C0ddlefish on 2020-05-15 18:43:35
Go the whole hog and make it the Anti-HOLI league. You must foul as your first action every turn or as soon as the first body hits the floor.
Posted by mekutata on 2020-05-15 19:05:57
I know the Right Stuff Tackle from CIBBL, I feel it is good to help stunties against normal teams. But among stunties I would rather see some wrecking.
I saw some leagues giving away prizes to certain players. Maybe GOLD for fouls per game? SSP for foul through CAS?
Posted by Kondor on 2020-05-16 17:35:04
I would love to see SPP given for fouls that cause CAS. What a trade off. Most players hate risking an expensive player by fouling. It would make sneaky git much better in my opinion.

ANd people would complain less about the T16 foul. And fouling would be more fun again. And Carlo would have legendary skeletons. If you wanted to keep your foulers cheap you would be firing them much more quickly.
Posted by MrCushtie on 2020-05-16 19:53:17
And SPP for chainsaw casualties too! I don't think you can handle that through rulesets though, so you'd have all the fun of going through matches to work out whether players qualified or not
Posted by mekutata on 2020-05-17 00:50:30
It would only be possible via League Admin. That's another reason why I would be going for scheduled league with season direction.
Posted by mekutata on 2020-05-17 11:56:59
Here are potential Star Players for this project
[url]https://fumbbl.com/note/mekutata/starplayerroster[/url]
I also opened a thread in the forum for discussion.
Posted by mekutata on 2020-05-18 19:48:27
https://fumbbl.com/p/notes?op=view&id=7706 will be updated