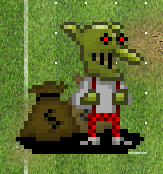 Hearing the podcast about cowhead's custom College leage (and see he posted just yesterday about it) I'd like to use the opportunity and also post again about my project
I am working on the concept for a Goblin league that makes heavey use of fumbbl's customisation potential.
There is already Icon material for additional (Star) Players and some convoluted sketches regarding further ideas for this project. You can find them in my Blog Archive.

Here I would like to present the concept of Corruption.
To emphasise the corruptive nature of Goblins I thought it could a great way to include all these league customisation options to the Coaches. Not really in a democratic manner, but rather as an additional gameplay function.
Coaches can bribe league officials to change the league's rules and potentially gain an advantage for the next matchday.

Here's a potential table for such Corruption Events. Again, I am curious about other Coach ideas and suggestions. Some of these ideas could be easily applied to any kind of league, some others are more Goblin league specific and some will be explained contextually in the bottom.


(All Effects should last for one Matchday:)

*A Season Reset happens normally at the end of the Season, Teams might lose certain players (Contracts that only lasted one Season or Players won as Prizes in the Pre-Season) or Access to temporary Loot (aka Cards including these Corruption Events), they might also really need to pay back their debt now to the Accountchief Goblin.
** I envision to include Squig Hoppers based on Stuntee Leeg Roster. Snotlings could be an option to include cheap Thralls.
*** I envision a league where it is possible to buy or steal other team's players. This should help to prevent using very crucial players before a big game. Another Option would be just to ban Star Players.
**** Or easier approach, enables Night Goblins to hire.
I had also included an option called "Open the Market" as the inclusion of further Special Cards and Weapons is an option. But didn't want to get this Post too convoluted but present the concept in an upcoming blog post.

Additionally currently unused Options included in fumbbl:
Values for Spiralling Expenses and Expensive Mistakes.
Maximum amount of players on a roster. Access to any Skill in case of Skill Up.
Maxmimum Amount of cards.
Fouling: unmodified; +1 to injury if not interfered; done +1 to the armour roll.
Inducements: Petty cash affects TV, Treasury os automatically transfered to petty cash, Allow same star players
Piling On: allow Armor, Injury or both rolls; does not stack with other skills; is knocked out when rolling a double; requires a Reroll.
Sneaky Git: functions as Guard on foul assists
Stand Firm: Failing to dodge ends the player's turn instead of falling over. Does not cause a turnover.

If you read until here, thank you for your attention and have a nice day