15 coaches online • Server time: 06:50
* * * Did you know? The player with the strongest arm is Cherrystone Hotpack with 5758 yards passed.
Log in
Christer
Last seen 5 hours ago 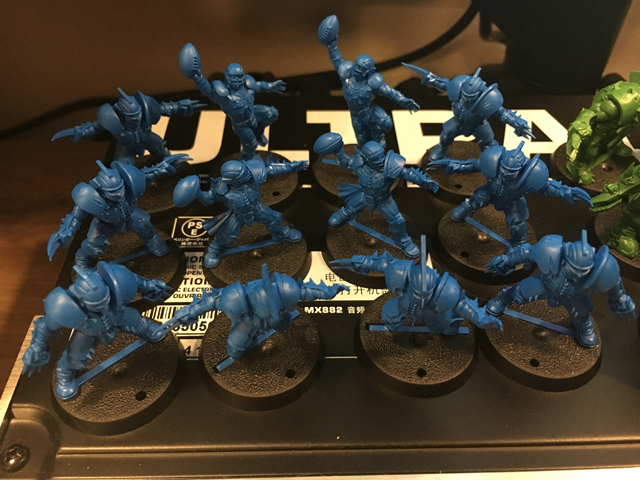 My first impression of these is that they're put together very differently from what I'm used to. Each model has a main body, a head and a torso/shoulderpad segment. The way it's put together is very reminiscent of Kinder surprise models with the head being clamped into place by the other two pieces, which stick together with a central pin. The joints are hidden from sight to the extent it's possible, with the shoulder pads hiding it for the upper part of the model, and the belt hiding it on the lower part. The short section of side that's visible does show the joint to some extent here, but overall I'm impressed by how it's put together. The models themselves are much more dynamic in nature than what I'm used to from the past, with great detail work and a nice overall look.

Next up, the appropriately green orcs: 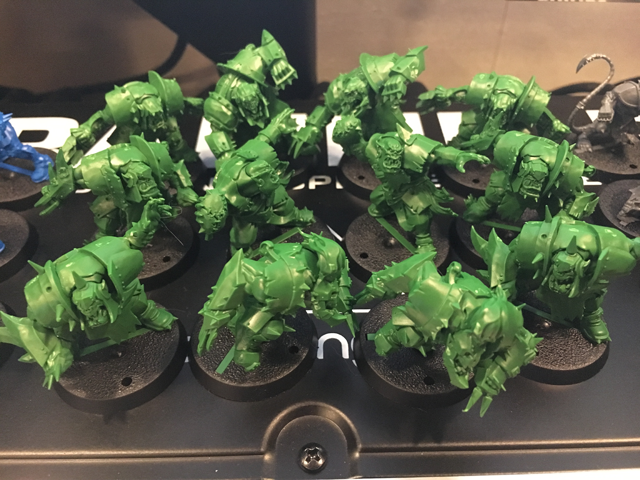 I was sort of expecting the same kind of structure as the humans for these, but to my surprise, the method used to assemble these are completely different. Instead of the three-piece design, the orcs have a more varied setup. All of them have a bulky body section, but the rest vary between the different models. The black orc, for example, has a head/face section where the mouth is completely open. The body section has some depth to it, and cleverly enough has a tongue modelled into it giving the black orc head a very distinct depth that I haven't seen in other BB miniatures up to this point. One of the linemen has a partial leg that you have to attach, while another lineman has both arms and shoulders in one separate section that slides onto the body piece. Some of these arm/head parts slide into place sort of at an angle instead of the traditional perpendicular manner, which again helps to hide joins really really well. The models have a very bulky feel to them, and lots of depth. The linemen in particular have a piece of leather/cloth hanging in front of their chest, which is actually a separate piece (or well, it's part of the shoulder section of the model), improving the "3d effect". 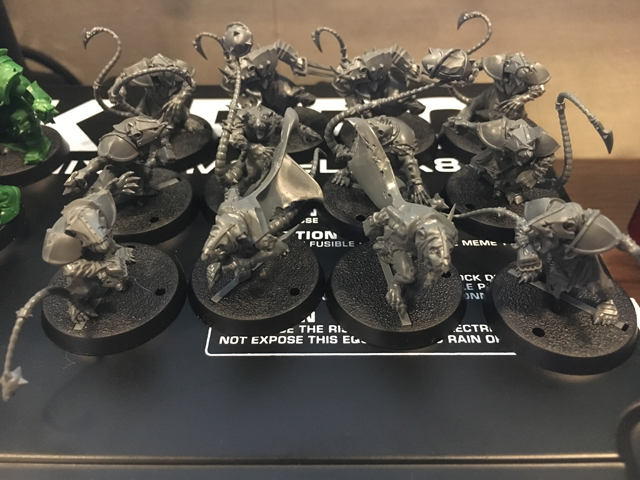 These are, again, different from what I'm used to. The first thing I noticed was how thin and fragile the tails appear to be. And sure enough, I managed to snap one of them while taking the models out of the sprue. If you're using a scalpel (like me) for this process, make sure you're super careful with the tails (I suggest starting with freeing the tails). A better option would be some side cutters to reduce the risk here. There are also some super tiny spikes near some of the gates (connection points between the model and the sprue), so be very careful or you'll end up shaving those spikes off. Anyway, the models are designed more like the orcs than the humans. The separate pieces are pinned much like the orcs, and in general the models look great. The figures are very thin and wiry, with the thin tails emphasising this effect. Poses are very dynamic, and the whole team feels.. fast.

Overall, I'm really happy with the models. They have very strong character, and GW has greatly improved their design compared to models from previous editions. Most of the models in this initial set appear to be relatively easy to modify (for those of you who enjoy that kind of thing) as the models have their arms, legs, head and shoulder pads separated from the rest of the model rather than being sculpted together in a single big block. However, minimal modding is harder (such as changing the angle of an arm or leg) as the connection system used is pretty restrictive and rigid. It's certainly possible, but it would require a lot more effort and green stuff than some of the old miniatures (Khemri skeletons for example).

One very neat touch with these sets of miniatures is that they all come with themed turn/reroll markers, a coin and balls. And in fact, you get six balls per team with two copies each of three different designs. That'll certainly help those of us who have a tendency to malplace those tiny little things constantly :)

In the box, you also get plastic versions of the range ruler and the two scatter templates. Pretty cool designs, but the scatter templates will absolutely need some paint to improve contrast. The range ruler feels a bit bulky compared to the old design, but I'm sure it's fine. It comes in two separate sections which you have to assemble on your own. Not sure if it's supposed to be glued or not (in assembled state it just about fits diagonally into the game box). The attachment system feels fairly rigid but it might become loose over time if you constantly take it apart.

What else? The dice.. Two colours (blue and green), with an orc-y type font used for numerals (the exact same design for both colours). The D6 has a Blood Bowl logo thing on the 6 side, and you get a D16. They're ok, but I don't find myself too excited about these dice. The block dice is another matter entirely. They feel very busy compared to the old design and I very much prefer the old variant (or well, the FUMBBL design). I'll likely use one of my other sets for blocking.

For me, on a personal note, I find there could be a confusion between blitzer and black Orc mid game so I'm considering obvious paint scheme variations as well as something really distinct about their respective bases, in addition to the blitzer plumes on their helmets.

I'm with grunts, FUMBBL colours for the win.
Posted by JellyBelly on 2016-11-27 01:02:26
Great blog and photos, Christer. I'd also love to see a painting blog. I assume you'll also be getting the Khemri team, when it's released? :)
Posted by Purplegoo on 2016-11-27 08:28:35
The Skaven look really great, but also a bit impractical. If I go to a tournament, the likelihood of those tails surviving a car journey with a packed boot and six games appears pretty low. Good directionally, though.
Posted by awambawamb on 2016-11-27 16:45:37
Agree, those plastic tails look flimsy! also, how good/bad are those to stun/prone placing? I remember I used to put my sauruses and skinks in square bases with one side painted green for prone and red for stun those look like they could benefit from this as well...