56 coaches online • Server time: 00:10
* * * Did you know? The most valuable player is Thursdaynight Guitarclub with 96 MVPs.
Log in
Purplegoo
Last seen 2 hours ago

The GLN seems to be on a little hiatus at the moment. I had written this 'Angry Man' column for the next issue, but it's been sitting around gathering dust for a little while, and I have a more contemporary idea now for the next issue (which I hope sees the light of day soon!). So, since it's been around for a while, I thought I'd do the blog thing. If the below sparks some interest in real life Blood Bowling events in the UK, feel free to drop by the thread listing 2014's events and ask any questions you'd like!

Here follows an angry report from summer 2012's excellent White Isle Star Bowl at Warhammer World, Nottingham. Table top Blood Bowl is a wonderful thing; it brings together like minds for a drink and a chat, fun, nerding and a weekend away. I urge anyone to have a go, each of my six opponents on this and every other weekend are a joy to spend time with, and a great time was had by all. Oh, right, this is an Angry Man column... 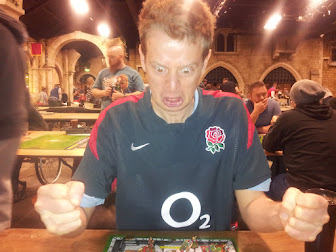 I awoke on a crisp Saturday morning in September, head raging and the sour taste of several drinks containing umbrellas from the previous night on my lips. Where was I? Who was I? These questions took minutes to answer; conjuring a level of rage and confusion rarely seen since the Jerry Springer show was in it's pomp and at least three men were not the father.

Knowing speaking to me before breakfast is often met with a swift left hook; I was left alone to collect my thoughts and dispel the haze that had enveloped me. A mug of tea, a crumpet and a silent salute to the Queen later, and like any good Englishman, I was prepared for battle.

I collected my Chaos Pact toy soldiers and made for the door. The drive to Games Workshop’s nerd cathedral was short, and due to the hangover still clouding my otherwise perfect judgement (it says here), I kept to the speed limit and picked my way through the back roads. I say stealthy, but less kind folks may use the term "lost".

Arrival at the venue wound me up even further, and my base level of anger is always high. We were locked out! Unacceptable. PeteW decided the use of a crowbar was not on, so I fumed until doors opened. An hour later, we entered and were greeted by this traditional GW staff member:

This is Shela, the hottest of GW employees. Strange facial tattoo, but if I got a few more umbrella drinks down me, not the worst I could do if enabled by very poor disco lighting. We assembled in the bar for hair of the dog, coffee and fried food, the British health kick du jour (culture, right there). The tournament participants consisted of plenty of FUMBBL luminaries; JockMcRowdy, the Scotch weirdo. Cribbleopplemegaword (more on Dave later), KornielieusPhraxx had flown to England just for the event (this is not factual). JimmyFantastic and buddy Andrew_Hopper had arrived to a cacophony of Top Gun 80's permed pop, wearing tool belts containing their nerd apparatus. They were like geek handymen; no doubt women from miles around were flocking to the scene like an Lynx / Axe advertisement. I treated each and every man jack of them with my customary disdain, for these were opponents to be crushed, not friends to embrace. The rules of the tournament are devilishly complex (read: I can’t be bothered to copy / paste), but simply put, we needed some mens and a star. Some skills were available.

Game one was Headstrong, a growing name on the tournament circuit. Here is his glorious face:

I assembled my troops for their first outing. A Claw Minotaur. A Diving Tackle Troll. A Block Ogre, Dodge Dark Elf and some other bits, or so it said on the bit of scrap paper I'd drawn this shower of a roster up on. Kill all mens, that was the aim. Afterall, a man with Pact was about as competitive as an asthmatic at Blow Football. This was not an environment for your 10 Marauder Clawpomb / Blodge Dark Elf shenanigans; we were forced to play like actual coaches with brains by Pete's ruleset. The cad.

It’s at this point I started questioning the Pact choice (as my headache grew legs, fangs and a sledgehammer). What kind of moron tries this team? A moron that wants to kill all mens, and that’s not my thing! The veil of confidence from the previous week was pulled from my glorious visage, as the reality of a hangover and a crap team sank in. I tried to sneak a Wardancer onto the pitch, but failed. Stupid rules. I was stuck, then, and ready for the off.

I also am reminded here that match reports consisting of ‘I rolled a 4. My opponent rolled a 2, but I then rolled a 3’ are about as interesting as Dressage. I will endeavour to deliver only a brief preface of what followed in each game in the interest of everyone’s sanity. Also, my columns are long enough anyway, right?

That said; I remember little of the game in question. Well, little I can relay without swearing. The glory of Blood Bowl is that you remember your poor fortune and the good stuff fades faster than a Sumo wrestler in a marathon, so the specter of a snake to allow a tie looms large in my mind. Maybe that’s all in my head, but it’s my column, screw you, facts. 1-1 it finished, and I slinked away to point out Humans are clearly overpowered. Headstrong ended up finishing second, so it shows that I make everything up. I did, afterall, knock out Zug never to be seen again very early.

Game two, and Andrew_Hopper and his Amazons came into the headlights, and like the roadkill he was, was dispatched 2-0. See here his mugshot, be kind, he hangs out with JimmyFantastic, so in comparison he's the Mona Lisa:

I remember a gloriously coached DT Troll double-chainpush into the ball showing Blodge it was overrated, my opponent being a Gent and being dazzled, nay aroused, by the power of Andrew's toolbelt. Jimmy and Andrew were later to get riotously drunk and crack onto Shela, so all power to him, he was clearly saving all of his power for the drink crusade. A fine venture. I think my star (Dribblesnot) bombed up a storm here, and Willow Rosebark wilted under the kosh.

Game three was AceRimmer and his Khemri machine. Another clinical 2-0 (clinical because it was me. When the other guy does it it’s enormously jammy) was to follow:

This photo was clearly taken at 0-0, although it’s fair to say that my opponent was of a far less angry disposition than I, so he may well have been delighted throughout anyway. I think, for the first and only time, I engaged the KILL ALL MENS button, and everything went bananas enough for the victory to require little thought. Ahh; Blood Bowl, so much fun, eh? Little skill on show here, but the dice did take the edge off the rising anger in my bones.

In the third round Joemanji met JockMcRowdy. Here is a picture:

I’d remembered I was supposed to be taking photos for this column at this point, so I was desperate to capture even these guys on film to prove I'd not just made the weekend up on an acid binge. I also particularly enjoyed this shot of StanRichardson being popular:

After day one, beer ensued. Despite 2/1/0 with Pact of all things, I was still irritated. But that is par for the course. I retreated to Paul Gegg’s hollowed out volcano and played other nerd games until the wee hours to forget nerd Bowl. Rock n’ roll.

There he is, the face of evil. Well, the face of the guy that beat me, anyway. Same difference. 1-2 to Vampires with Willhelm. Oh, the cad. The bounder! It was this game where the Pact beat themselves and the Vampires were never thirsty, and my race choice began to hammer home it’s stupidity. Big guys failed with abandon, Marauders were dominated by Thralls, and it all went horridly wrong. I refrained from turning the board over and flying at my opponent, and he can count himself pretty fortuitous. Might be something to do with this bouncer type goon standing by:

Jim went on to 6/0/0 and a tournament victory, what a guy. My Internet browser inserted the word 'guy' there, I assure you the actual word I used was not suitable for this fine website.

After the loss, it was Maverick and Necro:

This was tight, but 2-0. An 11 man roster for my opponent was Maverick's undoing, and the Claw Mino got stuck into his task, giving me the numbers. Here is a picture of some stuff happening, I’m available for weddings, funerals and bah mitzvahs for quality shots like this:

Game 6 and the end of the line. Don_Vito, Cribbleoppledopplewobblepopplepie, Dave, whatever his handle, he was last on my slate of games:

Knowing we were out of the running and our game was next to pointless, we played like the skilless morons we are. It was fun, an emotion I rarely understand or enjoy, and just for a moment, the majesty of tournament Blood Bowl dissolved my anger bone. We finished 2-2, embraced like brothers, cursed the jammy sods who had robbed us of victory, and went off to commit arson somewhere in the building (PeteW, as ever, made us behave in the end).

So, 3/2/1 with Pact. Pretty decent, I suppose. Can’t complain. Although, obviously, I did at length, and have here.

Here is Jim with his trophy and the gorgeous spubbbba team wot he won:

JockMcRowdy won the ‘Cheesiest Team’ prize, some cheese I stole from Paul Gegg’s fridge at late notice. Pete gave me one job for the weekend, and I had to steal to complete it. That is how I roll. Glowworm the Stunty Cup. Some other people some other prizes; what am I, the Internet? All in all, a great weekend’s nerding. We all got free dice, Pete organised like a hero, and no-one died. And that, afterall, is all one can hope for.

You should come next time. That's right. YOU. There will, we hope, be a WISB soon, but if there isn't, there is so much TT BB local to you, if you don't go find some, I will insert Shela's toothpick right where the sun doesn't shine.

I must point out for all too complex legal reasons that all nerd apparatus used and other things contained in poor photographic evidence are the intellectual property of those super lovely Games Workshop people. It's all theirs, their copyright, and I hereby submit to offering them my firstborn if they so choose to relieve me of him / her / it for the privilege of putting the photos on the Interweb. All hail our glorious GW overlords. I should also mention that if someone is uncomfortable with me posting pictures of them, ask and I shall remove. I'm pretty sure that I asked everyone at the time, but if not, shout.
Posted by JimmyFantastic on 2014-08-02 11:39:59
Awesome tournament and awesome write up! Did you know that I actually scored the most TDs that weekend? I think I should have won the cheesiest team award but I played crap.
Posted by the_Sage on 2014-08-02 12:14:32
Jealous. I want to win a Spubbbba team too. =P
Posted by Purplegoo on 2014-08-02 13:32:05
Jimmy: No, I didn't!