We weren't built with an all-Journeymen theme in mind. We were originally going to be a low-TV outfit, gaming to keep our TV low (with a minimum of cheese) to keep playing low TV games. I was getting tired of retiring and restarting teams, you see, and my inability to play in Euro times kinda got me off of the RRR circuit, it just got to be too much burden on my Saturday mornings. As players skilled, we'd retire them and replace them with rookies. But then I made Welcome to Ranked!, which does the job much more fairly (goblin, pricey rerolls), and Ranked Amateurs were free to pursue a different theme. I fired everybody but the Journeymen and hired a new squad, after game 13. Since then, apart from a 6-game experiment when I hired a couple Blitzers (and quickly gave them up), these guys have been all-Journeymen. So a total 181 games. (We went 9-2-2 in our first 13 games, and 2-2-2 over that 6 game stretch, for a total 11-4-4. Subtracting those games, our record is 85-55-41.)

I did some fumbling around on Shraaaag's scripts, and I made this table: 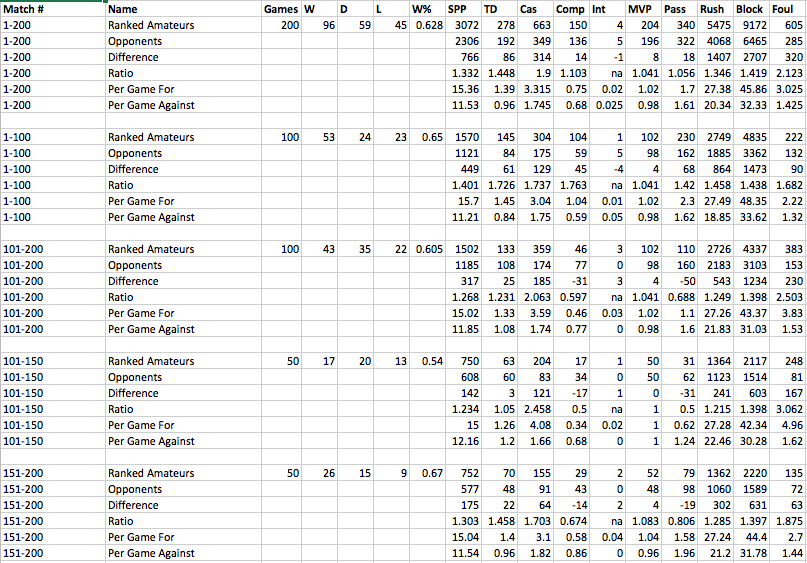 1) I had a POMBer (Edward Grottybrook) the whole time. POMB does damage, but doesn't proportionally help you win 'cuz it costs positioning.
2) It was during my Equal Opportunity hunt days and I was playing to kill.
3) It was also during the Amateurs vs the Grid Challenge, and I was playing a lot of soft teams.
4) Albert Palehawk had died, but Evander Hardspike had not yet joined the squad, or was just a rookie.

I've come to a seemingly similar conclusion (through intuition) that CPOMBing is possibly contrary to winning games.
Posted by ben_awesome on 2017-02-15 11:27:58
But have any of the amateurs achieved a larson? thats the question we want to know!
Posted by JackassRampant on 2017-02-15 15:42:57
Nope. Jackass has never achieved a Larson.